While the West wrestles with pressing questions like how to ask aunt Edith if she’s got that booster before you invite her to Christmas Dinner, the rest of the world contemplates other issues.

They grapple with other questions like, ‘will I be murdered for practicing my faith today?’ Sadly, for far too many, the answer is ‘yes’.

This isn’t happening in Taliban-controlled Afghanistan, either. This is happening in the comparatively prosperous and very well-educated nation of Nigeria.

Dauda Sabo, spokesman for the Askira-Uba Local Government Council, confirmed the attack in a statement on Monday (Dec. 20), saying ISWAP militants killed 12 people and wounded three others, along with burning down nine houses.

…“The attacks were carried out by these armed terrorists without resistance from military in the area,” Balte said. “Christians who survived have been forced to flee the village.”

Christians are currently being murdered by the thousands in Nigeria, more than any other country on the planet. How have Biden’s people handled that crisis so far? Just about as well as you’d expect.

Blinken Removes Country That Killed 3,400 Christians This Year (So Far) From Watch List

Right out of the gate, Blinken caused an international incident. BLOOD ON HIS HANDS: Have You Heard About Biden’s Diplomacy Failure… In Nigeria?

This is the same Boko Haram, remember, whose previous terrorist acts led Michelle Obama to pose with this photo back in 2014: 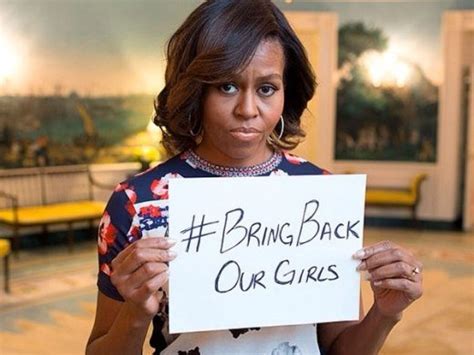 Not long afterward, Obama made an important decision in Nigeria’s struggle against Boko Haram.

Ever since Jonathan declined support for same-sex marriage in Nigeria, Obama refused to sell arms to Nigeria to fight Boko Haram. He tacitly supported [President Muhammadu] Buhari and never stepped his foot in Nigeria,” he said.–EpochTimes

You can see this reflected in public statements at the time.

KILL THE CHRISTIANS: Kerry Condemns Nigeria For Ban on Gay Marriage Not For Slaughter of Christians

But you might wonder: maybe the slaughter of Christians wasn’t as bad back then? Sadly, it was. And that decision had consequences. Most of the victims here were women, children, and the elderly unable to flee from their attackers:

For a sample of ClashDaily stories on this topic, click HERE and scroll through them. They go all the way back to when our start was still new. Like this one:

If you’re going to turn your thoughts and prayers to this situation, make sure you’re using the right tool for the job. There are many kinds of prayers for many kinds of situations … including one variety found all through the psalms that most of us haven’t been taught about in our church lessons on prayer.