The network that got busted — more than once — crafting propaganda to help Dems and hurt Trump wants Fox News to be excluded from Press Briefings?

This is the cattiest case of sour grapes this writer has seen in a very long time.

CNN’s ratings are in free-fall because they have proven Trump’s prediction right. Once Trump walked off the national stage, they had nothing left to discuss, and their ratings would cratered, just as he said they would.

Project Veritas busted them more than once trying to put their thumbs on the scale for Joe Biden, and the daily COVID death clock that flashed across the corner of every news show mysteriously disappeared under Biden. (Kinda like how Dubya’s Iraq war death clock disappeared once Obama breezed into town.) See the end of this article for the links to back up that claim.

Even the Charlottesville lie that was foundational to Biden’s run for office?

CNN knew it was a lie because Jim Acosta was the one who had asked Trump the question. And before CNN decided to weaponize that quote, Jim-Look-at-me-Acosta actually told the truth about Trump for once.

CNN’s ratings don’t even show up on the top 10 of news programs on any given night. Fox usually gets 8 or 9 of the top ten slots, with Moscow Maddow looking for something to take up the slack for her Russian Collusion conspiracies in the other slot somewhere in the middle of the pack.

The people have spoken. CNN’s lineup of talking heads — the ones that are still around, anyway — don’t say anything worth hearing. How are they responding to this setback? Are they reinventing themselves?

No, only strong people with self-respect try to achieve success by becoming better than their opponents. CNN does not have a track record of hiring such people.

Instead, Don Lemon is taking a page from Tonya Harding’s story and trying to break the knees of a stronger competitor. Just like Oliver Darcy did to Alex Jones when CNN was threatened with (gasp!) memes and public ridicule.

CNN’s @donlemon: "Why does Jen Psaki continue to call on Fox in the briefing room?”

"Why should they be able to take part in a legitimate press briefing and legitimate journalism?"

"Why did they even allow Fox to pretend in the briefing room they’re a real news organization?" pic.twitter.com/HEf06pesIT

Here are a couple of especially relevant replies. 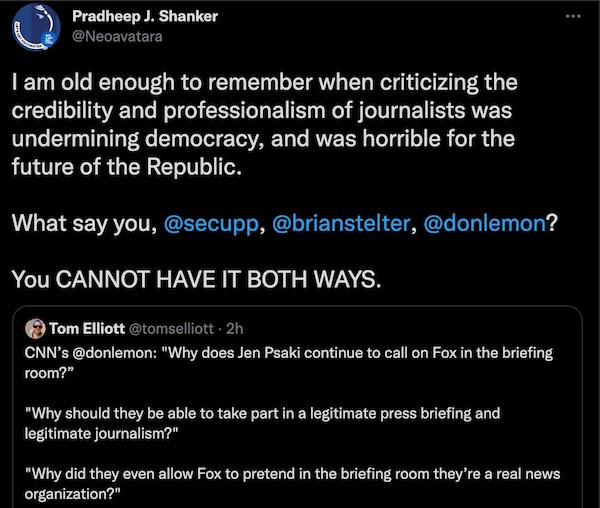 The first was in response to Lemon’s attempt to tie Fox to the events of Jan 6, the second went on to call for openly hostile media to be turned loose against every administration to keep them honest and the people informed… not just the ones the establishment has agreed are worth hating.

Why do activist partisan presstitutes resort to such dirty tricks? Simply put, they work. Those tricks get them the political power they so desperately crave.

Three videos where a CNN employee explains the manipulation game and admits it’s an exercise in propaganda.

This abandonment of journalistic ethics in favor of bare-knuckle politics can be traced right to the feet of CEO Zucker.

CNN has abandoned any pretense of working to create an informed electorate that can freely choose between two choices, but it’s not just them.

Last we checked, neither WaPo nor NYTimes have returned the Pulitzers they received for pushing a discredited anti-Trump ‘Russian Collusion’ hoax whose chief sources were literally Russian Disinformation and the Clinton Campaign.

Meanwhile CNN has been caught with their pants down way too many times… sometimes not even metaphorically.

If anyone is to be stripped of their credentials, Fox News is a long way down the list of candidates.

They’re just easy to pick on because they are practically the only big news group right now even offering Biden and Psaki any difficult questions… and that’s partly because the smaller right-of-center groups don’t even get called on by this opaque Administration full of gutless punks.