Blue on blue infighting is always fun to watch… especially when a crooked old crone like Pelosi is on the receiving end of it.

In the few years since AOC has taken office, there’s a lot we’ve criticized about her, but there are a few things she’s gotten right — even if she got there for the wrong reasons.

Here’s an account of what started the ball rolling. (Emphasis added)

At a press conference earlier this week, a reporter asked Speaker Nancy Pelosi about an Insider report that 49 lawmakers and nearly 200 staffers had violated the STOCK Act’s disclosure requirements since last year. Should lawmakers be banned from buying and selling stocks, the reporter asked her? “No,” Pelosi replied. “We’re a free-market economy. They should be able to participate in that.”

Should they? Federal law, in its infinite majesty, allows lawmakers and non-lawmakers alike to trade individual stocks. Lawmakers have one big advantage over the rest of us, though: they are privy to all sorts of material non-public information by virtue of Congress’s legislative and oversight powers. And since their access to that information isn’t always readily apparent to outsiders, it’s also a lot harder to prosecute them for insider-trading violations. — New Republic

One of those things AOC has gotten right involved putting a shiv in Nancy Pelosi’s excuses for why someone in a position like hers, who can drive market changes with a single House vote, can invest in the companies who lobby government for the changes they make.

For example, with the pressure for mandatory vaccine use, how many legislators own stock in the biomedical companies that produce vaccines? Or, with all the incentives going to green tech, including electric vehicles, and disincentives going to fossil fuel industries, how many legislators (or their relatives) have bet big on electric vehicles, or dumped shared in petroleum companies? 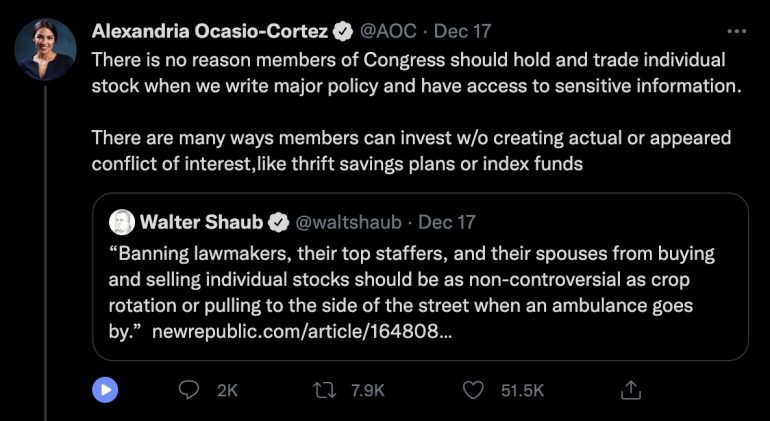 We will add some caveats to this praise of hers. First off, her opposition to corruption is very selective. She’s had nothing to say about the various legal and moral improprieties alleged against her squad-mates, including election-rigging allegations against Ilhan Omar.

Further, her own chief of staff had to resign because he had created a dark money donation system that at least skirted election finance rules and more likely completely violated them. And that’s not the only ethics issue she’s faced.

But there’s another wrinkle in this conflict that’s less readily apparent to the casual observer.

In AOC’s eyes, this is not a blue-on-blue attack. This is a supremacy battle between the establishment Left and the Radical left and AOC is eager to jettison establishment types like Pelosi.

Remember, she was the one who once said “In any other country, Joe Biden and I would not be in the same party.” We’ve documented this supremacy battle during her brief time in office. Here are some examples, with the first one giving a handy timeline of developments:

By picking better heroes to look up to, we can all become better people. Ladies, you have other options out there besides a crony crone and an arrogant activist. Here’s a great place to start!