Dr. Mehmet Oz is calling this a form of “cancel culture” but a reporter for POLITICO says it’s totally normal. Twitter users point out that she’s very, very wrong.

After Trump-backed candidate Sean Parnell suddenly dropped out of the 2022 Pennsylvania Senate race, the famous television doctor has announced that he’s running as a Republican for the seat.

Frankly, there’s a whole lot to say about that — from his long-time residency in New Jersey to his historically left-wing positions on issues such as abortion, transgender kids, and even “Red Flag” laws. Human Events editor Jack Posobiec has receipts that he presented on Steve Bannon’s War Room. Not to put too fine a point on it, but Republicans have some pretty legitimate questions about why Dr. Oz is running as a Republican.

Nevertheless, this move by the Philadelphia Inquirer to not use his title of “doctor” in reporting on the Senate race is certainly a slap in the face.

In addition to hosting a television show and writing a number of books, Dr. Oz is a cardiothoracic surgeon and a university professor. But he’s running as a Republican, so it would be wrong to allow the decades of branding as a public figure to be used to his benefit, right?

The Philadelphia Inquirer recently announced that it will refer to Dr. Oz by his name – Mehmet Oz – in articles about the Senate campaign, just like all other candidates. Oz is outraged this about that this morning, saying that it is “shocking” and “they want to silence me.” pic.twitter.com/E39t60n6Jj

Natalie Fertig, a reporter that covers cannabis policy for POLITICO decided to quote tweet the above video and suggest that it’s totally normal for news organizations to ignore the credentials of medical doctors and simply refer to them by their given name. 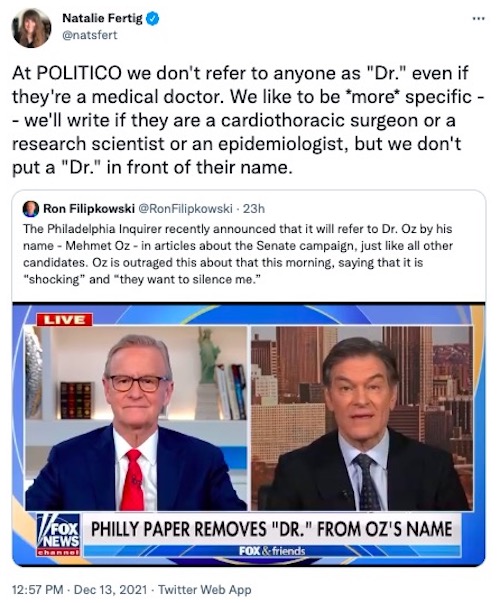 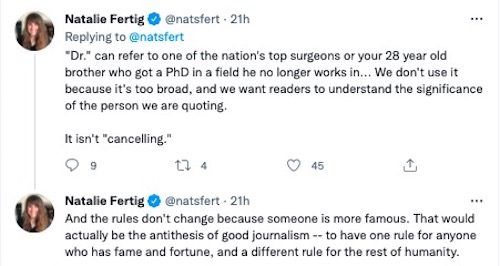 Here’s the thing… The Philadelphia Inquirer used “Dr. Jill Biden” in an article in 2019 as Joe launched his campaign to become the Democratic nominee for President. 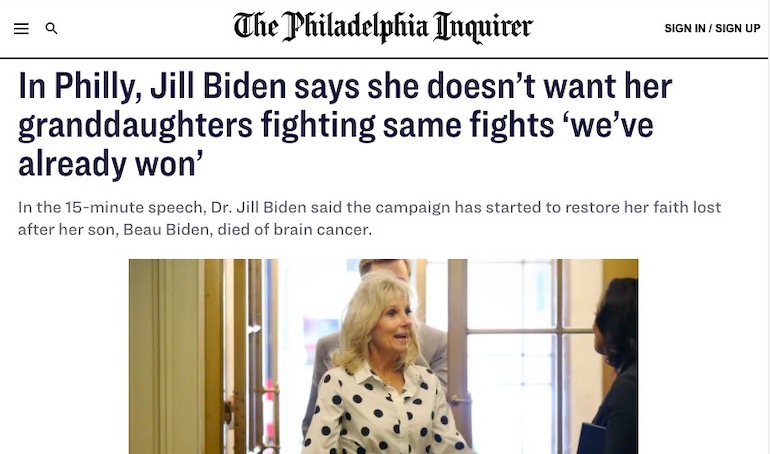 There is a weird obsession with people in the Corporate Media insisting on referring to the First Lady as “Dr. Jill Biden” despite the *ahem* questionable dissertation that gave her the Ed.D degree and granted her use of the honorific “Doctor.” Kyle Smith over at National Review read the First Lady’s dissertation and called it “garbage. Smith said that it had “insipid writing, typos, faulty language,” and “weak research.”

Fertig was dragged on Twitter as Republicans who are able to use the search function on the POLITICO website found that they did indeed use the title “Dr.” in their articles. The most glaring of which was the use of “Dr. Jill Biden” to refer to the First Lady.

You literally referred to Jill Biden as Dr. Jill pic.twitter.com/nGuukuJ5Cd

The headline most cited in the responses was from March 2021, “Needing to sell the Covid bill, the White House calls in Dr. Jill” which made it sound like she’s a medical doctor instead of a teacher with a doctorate degree in education. 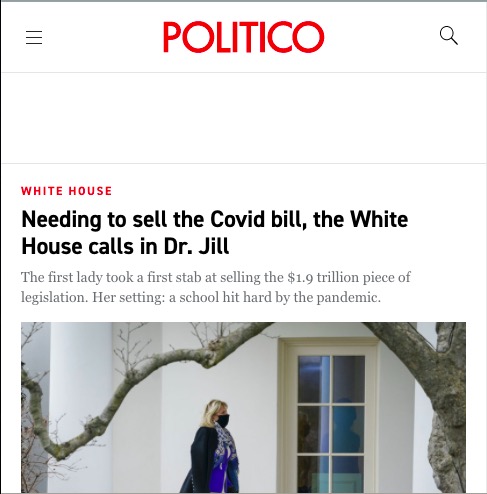 POLITICO has been doing this since “Dr. Jill” was Second Lady. 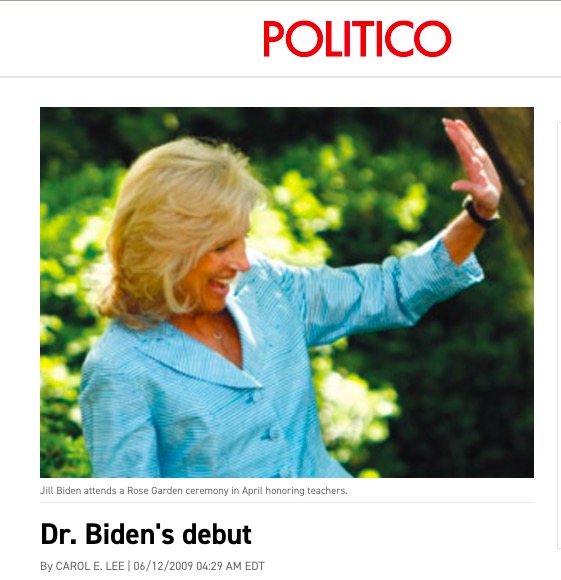 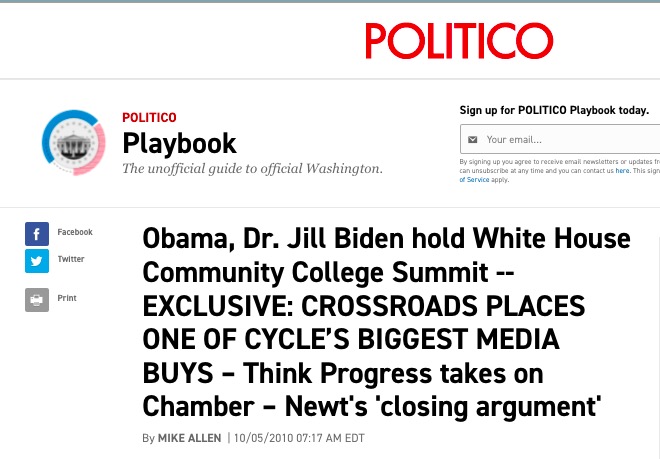 Of course, POLITICO also refers to the left’s favorite public health expert and big advocate for the ‘Rona jabs as “Dr. Anthony Fauci” even though he joined the National Institute of Health immediately after completing his medical residency. This means hasn’t actually treated a patient since sometime in 1968, and even then, he was under supervision. 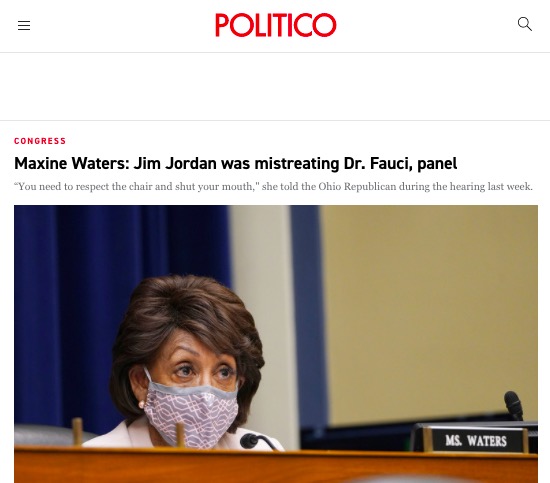 Unlike “Dr. Jill”, at least Fauci has an actual medical degree. He obtained it when Lyndon B. Johnson was President, but hey, it still counts for something. It landed him a decades-long stint as an expert in “public health” and now he’s the highest-paid federal bureaucrat in the United States and never had to see a patient of his own. It’s a pretty good gig if you can get it. Presidents have come and gone, but the Prevaricating Authoritarian Smurf remains despite his screw-ups with AIDS and COVID.

Still, the insistence of a news organization calling a community college teacher with a doctorate a “doctor” simply because she’s the First Lady is a strange juxtaposition while refusing to refer to a cardiothoracic surgeon as a “doctor” just because he’s a television personality who was launched to fame on Oprah’s show.

But this is the state of the Corporate Media today.

The problem is that Fertig accidentally told the truth in her tweet, “the rules don’t change because someone is more famous. That would actually be the antithesis of good journalism — to have one rule for anyone who has fame and fortune, and a different rule for the rest of humanity.”