No sooner had the shambling mound of mediocrity scolded the nation, dividing America into ‘us versus them’ based on how obediently we complied with his ever-changing rules, all but promising us horrible and miserable deaths, Joe sat down to a Christmas concert thrown in his honor. 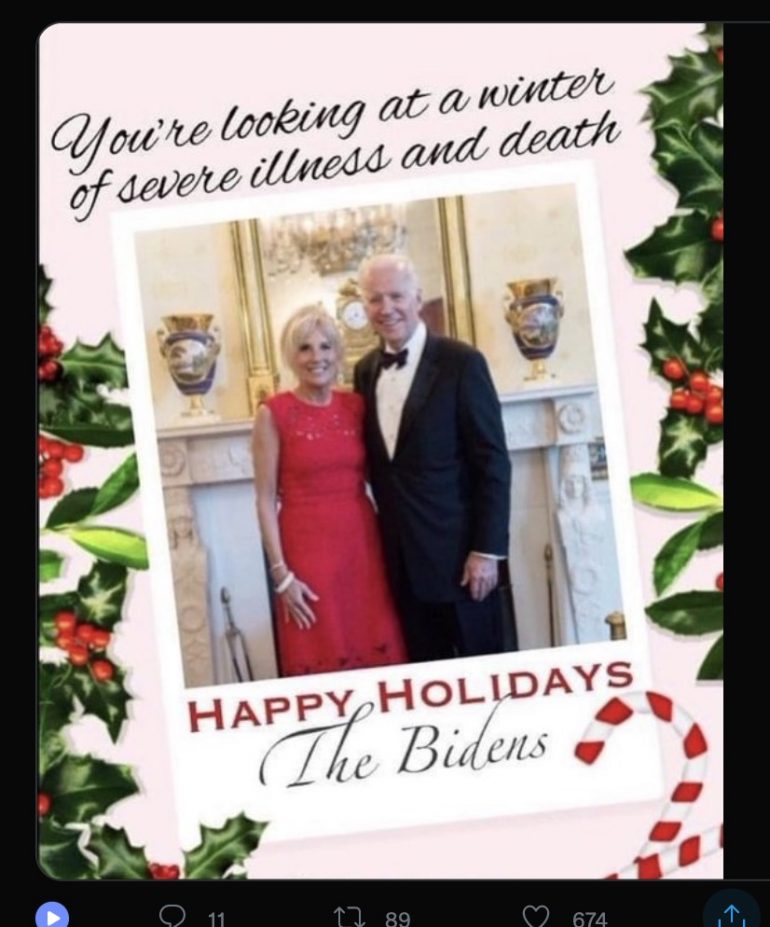 This is an indoor concert mind you, so obviously in these perilous times, in which Fauci has been telling us we should turn away relatives who haven’t gotten their eleventeenth booster yet, you can expect all in attendance will all be carefully masked to the hilt… right?

Sure they will. Except that Joe can be seen flashing nearly the same vacant but amused (maskless) smile that Hillary gave us at that balloon drop.

Here are a few clips from the event before we move on to the one we REALLY want to show you. Let’s start with the promo piece talking about who’s in it.

They are your typical Christmas concert kind of fare… ‘I’ll be home for Christmas’ and all that.

There were a wide variety of different acts. 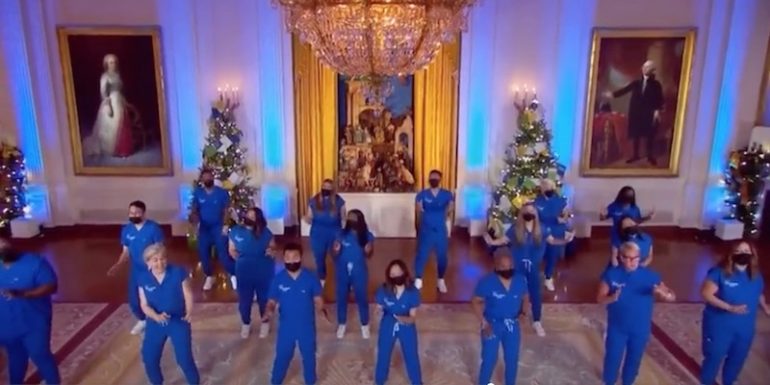 But this performance, in particular, is a real kick in the teeth.

The song is fine. The singers, talented.

It’s the scrubs in the context of Joe’s endless and shameless COVID-ing of absolutely EVERYTHING. But that’s not all.

This is a real thing that happened in the White House. pic.twitter.com/GqbpDnwjz4

(Link here if the video isn’t working on your device.)

These singers in scrubs — is it the Northwell Nurse Choir from America’s Got Talent? — are singing ‘Need a little Christmas’. The song is talking about the building excitement as that central American holiday nears.

The reason this song is obscene becomes clear when the video switches to a split-screen image in a hospital where a recovered COVID patient is getting high-fives after being discharged.

It’s a stark reminder that nurses were the ‘COVID heroes’ back when this virus was at its peak seriousness, and we had little or no idea of what we needed to do to treat it.

And yet these people STILL showed up to work — not just in a line of work where there was a good chance you would encounter it in your daily comings and goings — like cops and bus drivers. No, these folks were giving literal hands-on care to people who had been intubated… or who died.

But how many of those same people — including many Covid-hero medical staff who got sick but recovered — aren’t having a Christmas of any kind this year because Joe Biden decided they were evil, dirty unvaccinated people who deserve to be thrown out of the military, out of government jobs, out of health care positions, and pretty much out of polite society.

He’s grinning his big maskless grin because this event is all about him, and he’s reveling in it.

BUT — if he had the slightest bit of empathy, to so many Americans now suffering as a direct result of mandates he has personally issued, he would either encourage the public to let loose with Christmas festivities, or he would make the decision on his own to strike a more somber tone.

But if he had that level of empathy and humanity, he wouldn’t be firing COVID heroes in the first place.