The mask slipped on President Biden’s Chief medical advisor on Wednesday when he indicated support for government mandates to force people who don’t want or need the shot to be vaccinated.

Dr. Antnony Fauci appeared on MSNBC with Andrea Mitchell where she asked him about the vaccine mandates.

Fauci said, “Sometimes you’ve got to do things that are unpopular, but that clearly supersede individual choices and are directed predominantly at the communal good.”

Fauci said that everyone needs to get the shots and indicated that he values the “communal good” over “individual choices” with regard to vaccination. This is despite any individual risk/benefit analysis of these new vaccines that clearly don’t work as advertised, wane in efficacy quickly, and don’t have long-term data. Not to mention that the entire scientific community seems to have completely forgotten about natural immunity, which is what vaccines attempt to emulate without an infection.

Here’s the transcript of the brief clip:

MITCHELL: There’s so much opposition now in Congress, and across the states — even in Democratic states… Governor Whitmer in Michigan, and other places. This is becoming just a political test and the outlook is not a sure thing in the court system. Is there any thought of backing off of that and trying to avoid, you know, all the outcry against it?

FAUCI: Yeah, but, you know, Andrea, we really have to get people vaccinated. I mean, I understand and we all understand how people do not like to be told what to do. They want to make their own choice and their own free will — I get that and I respect that. But these are unusual times, and you can’t think only of yourself and your own personal opinion but you’ve got to think about your communal responsibility to get yourself and your family and — indirectly, then — the community protected. So, I would prefer — and we all would prefer — that people would be voluntarily getting vaccinated, but if they’re not gonna do that sometimes you’ve got to do things that are unpopular but that clearly supersede individual choices and are directed predominantly at the communal good. And that’s what we’re talking about when we’re talking about requirements.

Fauci: “I would prefer, and we all would prefer that people would be voluntarily getting vaccinated, but if they’re not gonna do that, sometimes you’ve got to do things that are unpopular, but that clearly supersede individual choices…” pic.twitter.com/yxbOw9cwKw

He didn’t misspeak… Fauci said something similar when talking to the Washington Post about Mayor de Blasio’s new vaccine mandate for private sector businesses in NYC.

Fauci said, “No one likes to be mandating for people to do things that they might be hesitant to do. But, quite frankly, you have to when you’re in the middle of what we call a ‘historic experience’ of the worst pandemic of a respiratory disease in the last hundred years.”

“We have to put the communal responsibility ahead of individual preferences,” added the Prevaricating Authoritarian Smurf.

He then said that although people don’t like being told what to do, he hinted that it was the fault of the unvaccinated for the mandates because if they just complied, the mandates wouldn’t be necessary.

Fauci said, “So, although no one — myself included — likes to be told what you have to do, sometimes, if you don’t come to the realization that it is good for yourself, for your family, and for the communal good, then mandates or requirements become necessary.”

Fauci on NYC: “Quite frankly, you have to [mandate vaccinations] when you’re in the middle of what we call a historic experience of the worst pandemic of a respiratory disease in the last hundred years. We have to put the communal responsibility ahead of individual preferences.” pic.twitter.com/sZPOmKoHHk

Fauci has indicated in the past that Americans have too much of an “independent spirit” and it’s time for people to “do what they’re told.”

WATCH: Dr. Fauci Says That America Has An ‘Independent Spirit’ But It’s Time To ‘Do What You’re Told’ To Stop COVID

The vaccine manufacturers that keep adding more and more jabs while they pocket boatloads of cash courtesy of taxpayers and hide their data?

The “pubic health experts” that seem to be running cover for Big Pharma?

This diminutive prevaricator in “public health” that has been a bureaucrat under 7 presidents, has been consistently wrong throughout the pandemic, and appears to have had knowledge that U.S. taxpayer money may have gone to a lab in Wuhan, China, where this virus may have come from and lied to Congress about it?

The power-grabbing politicians that want to control every aspect of your life while they live theirs normally?

We know a hell of a lot more about this virus than we did in March 2020.

Despite all of the Corporate Media fearmongering, the recovery rate of the China Virus is still over 99% for most age groups. Studies have shown that natural immunity is robust and better than the vaccine, and millions of people have contracted and recovered from the China Virus.

Yet, they’re still pushing vaccines and boosters even though there are low vaccination rates in poor countries where people have comorbidities that put them at risk.

It is just unbelievable that we’re pushing to vaccinate 5-year olds in North America while in the Democratic Republic of Congo, only 0.06% of the eligible population have received two doses of a vaccine. The total vaccination rate is just 0.16%. 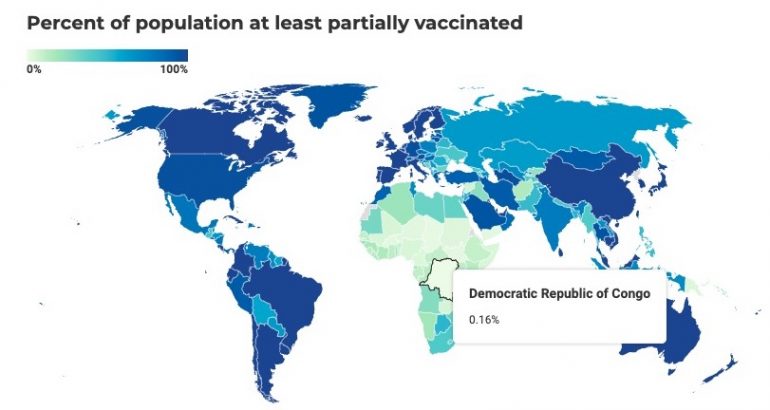 That means elderly people in DRC that we know are in a high-risk category are not yet vaccinated and we’re giving shots to kids that may not even show symptoms if they do contract the virus, and we’re wasting millions of doses on people who already have natural immunity.

If it’s about the virus and the threat of “variants” and a “pandemic of the unvaccinated” — then surely the focus should be on countries with low vaccination rates where the virus can continue to mutate, right?

Oh, except that the vaccines wane in efficacy and people can still get it and spread it after being vaccinated. So, really, what exactly is the point here besides a massive transfer of wealth?