Setting up a real Christmas tree is a lovely holiday tradition and it can make the whole house smell festive. But how you decorate it makes all the difference.

Normally, when we think of hazards and Christmas trees, they are of the fire hazard sort.

Occasionally, an animal will hitch a ride in the tree, but they are usually 4-footed and more of a nuisance than a hazard.

But one family discovered that a squirrel is NOT the worst thing that can hitch a ride home in your tree. Snakes are far worse. Especially this kind.

Rob and Marcela Wild, originally from Hertfordshire but now living in Cape Town, South Africa, had just finishing putting lights and baubles on their tree with children Edward, 11, and Sahara, six, when they noticed the snake emerge from the branches.

It is thought the reptile – identified later as a female boomslang snake, the country’s deadliest – had been hiding in the tree all along and then emerged when the decorating was done.

…’It was a very long two hours until the snake catcher got here and it was like the cavalry turning up but once he hooked it out with his tongs we could breathe again.’. –DailyMail 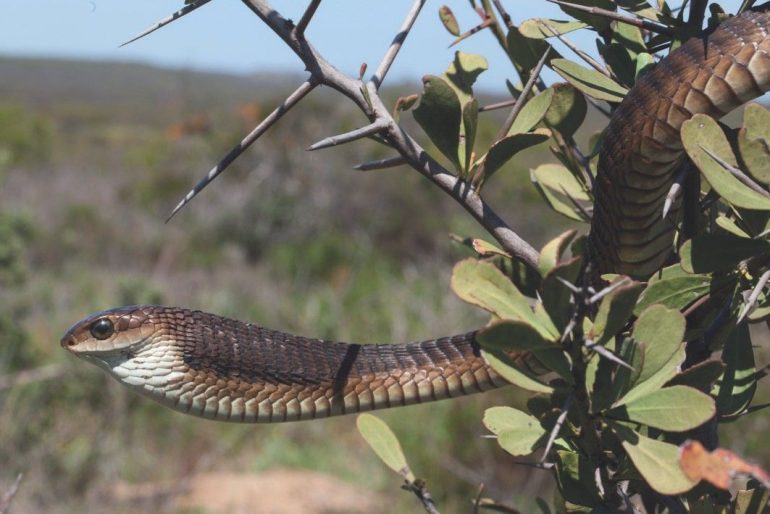 What do we know about these snakes?

They’re shy, and mostly harmless, unless they happen to bite you. Then things get real.

What this snake’s venom does to you would not be out of place in a horror movie. It’s hemotoxic, meaning that it destroys red blood cells, disrupts the clotting process and causes tissue and organ degeneration. What this unfortunately means is that massive hemorrhage ensues, causing the victim to bleed from the gums, nose and other orifices. Sometimes, the body of the victim will turn blue because of the widespread internal bleeding. Adding insult to injury, the process can be extremely slow, sometimes taking 5 days for the victim to die of internal bleeding. Thankfully, there is an antivenom, so if you’re bitten by one of these guys- don’t hang about.

It’s good that someone who knows what he’s doing was on call to save the day. In moments like that, masculinity isn’t so ‘toxic’ anymore.