When one conjures up in their whirring tin brain what it means to be a good “Christian,” who has a “personal relationship with Jesus Christ,” one imagines …

Some elderly lady who clutches her pearls and says, “Oh, my” when she sees a Kim Kardashian butt pic on Watters World via the Fox News Channel.

A big, teenaged, frizzy-haired, barefooted girl who dons a We The Kingdom T-Shirt, wears stretch pants, dances with a scarf during worship, and thinks holy water is a real thing.

A male hipster dandy who loves skinny jeans, sports a man bag, and quotes more aphorisms during a student bible study at Starbucks than an over-medicated Joel Osteen would on a three-day Mountain Dew bender.

Suffice to say, in the American evangelical milieu, being a Christian and having a “close walk with God“ is a very comfortable thing, but it was not so for King David.

Being “a man after God’s own heart” cost David a pound of flesh.

It meant David was on Satan’s Most Wanted list of folks Lucifer would love to obliterate.

Did they not tell you that in your “youth group?”

Here’s the reality, Ms. Kumbayah: to truly follow The Rebel from Galilee, to live as He lived, and say what He said, in this adulterous and perverted generation will land you in scalding hot water with all that is wicked.

David had to run for dear life at times from “fierce lions” who wanted to tear him to shreds and David wasn’t speaking “spiritually,” but literally. They truly wanted him dead because in his live, fire-breathing form, David was a wrecking crane to their idols and their evil machinations.

Psalm 7 shows David in the throes of a serious altercation and how he sang and prayed to God for deliverance. If you’re also in such a fray I suggest the following:

And repeat what David said here with faith and force and watch God vanquish your foes.
Psalm 7 (KJV)

1 O Lord my God, in thee do I put my trust: save me from all them that persecute me, and deliver me:

2 Lest he tear my soul like a lion, rending it in pieces, while there is none to deliver.

3 O Lord my God, If I have done this; if there be iniquity in my hands;

4 If I have rewarded evil unto him that was at peace with me; (yea, I have delivered him that without cause is mine enemy:)

5 Let the enemy persecute my soul, and take it; yea, let him tread down my life upon the earth, and lay mine honour in the dust. Selah.

6 Arise, O Lord, in thine anger, lift up thyself because of the rage of mine enemies: and awake for me to the judgment that thou hast commanded.

7 So shall the congregation of the people compass thee about: for their sakes therefore return thou on high.

8 The Lord shall judge the people: judge me, O Lord, according to my righteousness, and according to mine integrity that is in me.

9 Oh let the wickedness of the wicked come to an end; but establish the just: for the righteous God trieth the hearts and reins.

10 My defence is of God, which saveth the upright in heart.

11 God judgeth the righteous, and God is angry with the wicked every day.

12 If he turn not, he will whet his sword; he hath bent his bow, and made it ready.

13 He hath also prepared for him the instruments of death; he ordaineth his arrows against the persecutors.

14 Behold, he travaileth with iniquity, and hath conceived mischief, and brought forth falsehood.

15 He made a pit, and digged it, and is fallen into the ditch which he made.

17 I will praise the Lord according to his righteousness: and will sing praise to the name of the Lord most high.

* Check out Doug’s painting of “The Man Eater.” Custom prints available. Take 40% off using promo code ’40off’ at checkout for a very limited time. 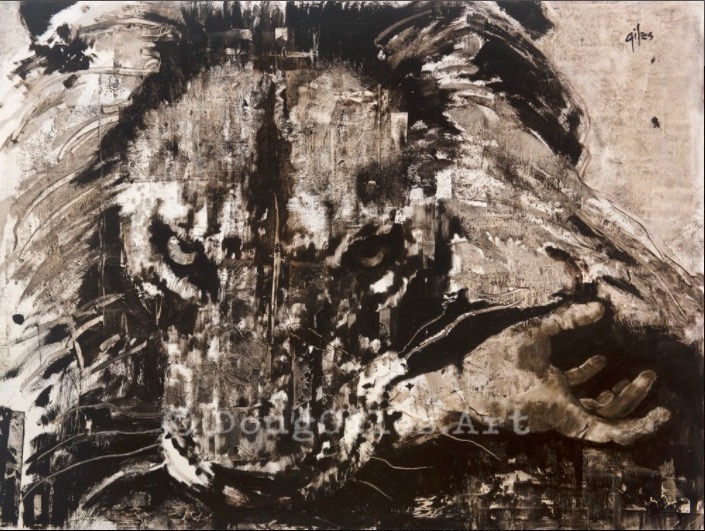 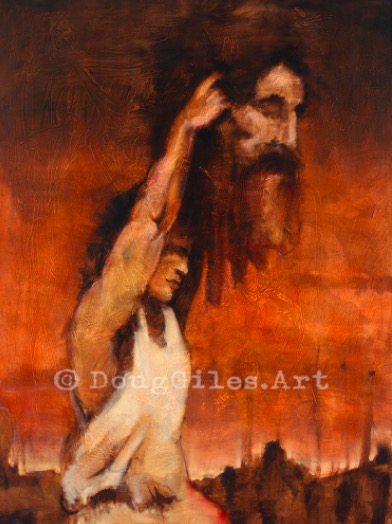