A thin skin and a big ego are a dangerous combination in politics. You end up making unforced errors.

AOC did exactly that when insecurities about her former line of work were hashed out on social media.

She gets a lot of grief about being a bartender / waitress, and she sometimes gets defensive about it. We have no problem with being a waitress, it’s her unwillingness to admit the limits of her political understanding that bother us.

She’s willing to cram policies down the throats of working-class Americans — including bartenders and waitresses — without stopping to ask whether there is any potential for real-world harms associated with that policy that should make her think twice about pulling the trigger.

In fact, so far as her Green New Deal agenda, real-world harms aren’t incidental to her policy, they ARE the policy. She believes she is going to lead us to the promised land if she has to drag us there kicking and screaming.

Republicans like to beat her up as a lightweight because she doesn’t bring much in the way of real-world experience with her to Washington. It’s a relevant question because she spends so much time talking down to anyone who doesn’t share her opinion rather than trying to persuade us that her way of seeing an issue is the right one.

The question of whether she’s an intellectual lightweight matters.

Here she is jumping on that issue and — more importantly — making herself the focal point of the story. 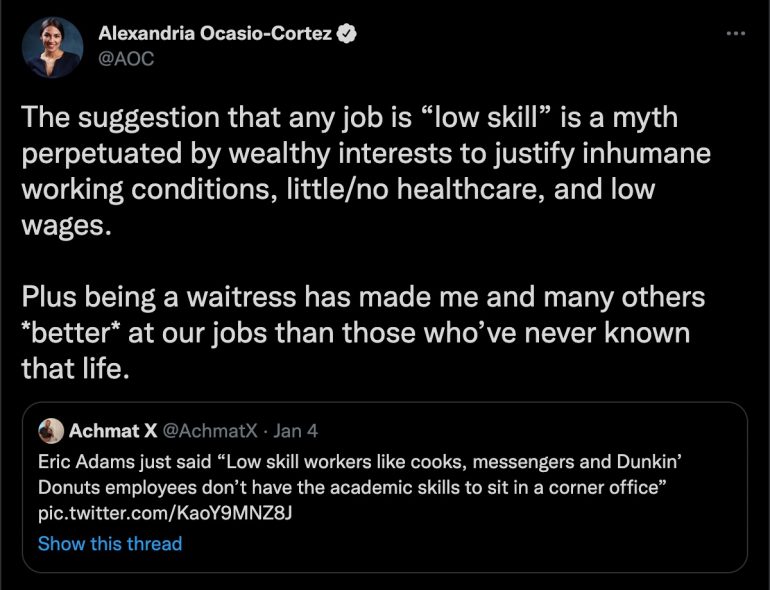 But there’s a serious flaw with her argument.

The original context centered around the claim that people with a job that you can take right off the street with no formal training do not have the skills needed to jump to the top of the corporate ladder.

Making a good cup of joe doesn’t teach you how to read a profit and loss statement, or negotiate a lease, or solve a supply chain issue, or comply with HR regulations.

Those are learned skills.

Why is that a problem for AOC?

If she actually means what she just said, then she just shot her demands for free education straight to hell. Here’s why:

She can’t claim there is no ‘unskilled’ work without denying there is a real difference in kind between labor and in, say driving a truck, reattaching a severed finger, or managing a transmission repair shop.

The skills required for taking orders or slinging drinks can be taught to anyone off the street. To suggest that, say, a forensic psychologist would hire some random slob off the street and expect him to start right away is laughable.

If she doesn’t mean what she said, she’s just insecure and should think twice about getting into flame wars when the topic comes anywhere close to that sensitive topic.

But in reality, she’s got nothing on these ladies.