With the drama that unfolded since her social media post last November, questions have swirled about women’s tennis champion Peng Shuai’s whereabouts and well-being.

A post on her social media account accused a prominent Chinese Communist Party official of sexually assaulting her. Then she disappeared.

The world grew concerned about her wellbeing and started demanding evidence of her being alive and well. What was posted in response left people skeptical that she was genuinely free in any meaningful sense… even if Yao Ming claims to have seen her in December, and says she’s in good health.

If they have no difficulty making billionaires critical of the Communist regime disappear, it should go without saying that the CCP has many powerful tools with which to convincingly compel someone like Peng Shuai to toe the party line.

In the beginning of the controversy, women’s tennis took a strong stand, and ClashDaily covered that story. HEY LEBRON: Pro Tennis Cares More About Human Rights In China Than Your Whole D@mn League

Here current status, and whether she is truly ‘free’ remains an open question… one for which her fans want answers. The Australian Open became an ideal place to raise this issue. And some fans did exactly that. 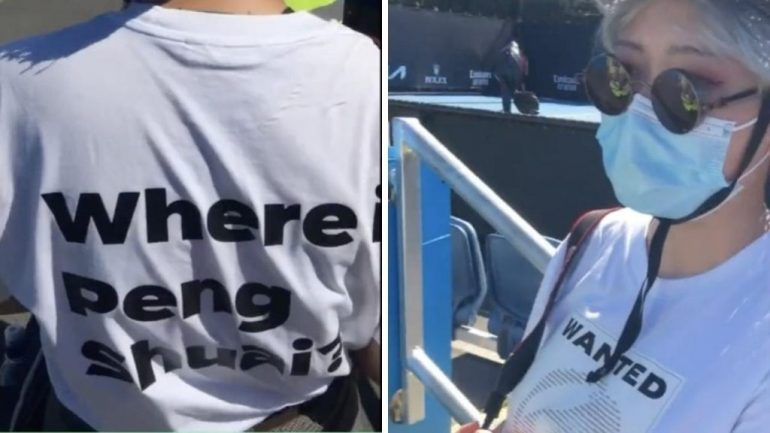 But the tournament, while stating they share a concern about the well-being of their star, strictly prohibits political messages of any kind to ticket-holders, including this one.

“Under our ticket conditions of entry we don’t allow clothing, banners or signs that are commercial or political,” a spokesperson said. “Peng Shuai’s safety is our primary concern. We continue to work with the WTA and global tennis community to seek more clarity on her situation and will do everything we can to ensure her well-being.”

Players competing in the tournament have been asked about the ongoing situation throughout its early stages, with four-time major winner Naomi Osaka saying it was important to keep raising the topic and keep Peng’s safety and whereabouts front of mind.

“If I was in her position, I would want people to care for me, too,” Osaka said. “I imagine myself in her shoes and, in that way, it’s a little bit scary. But you want to lend your voice and you want people to ask the questions.” — Sports Illustrated

Organizers took heat for this decision even from within the tennis world.

For example, Martina Navratilova blasted them over it. 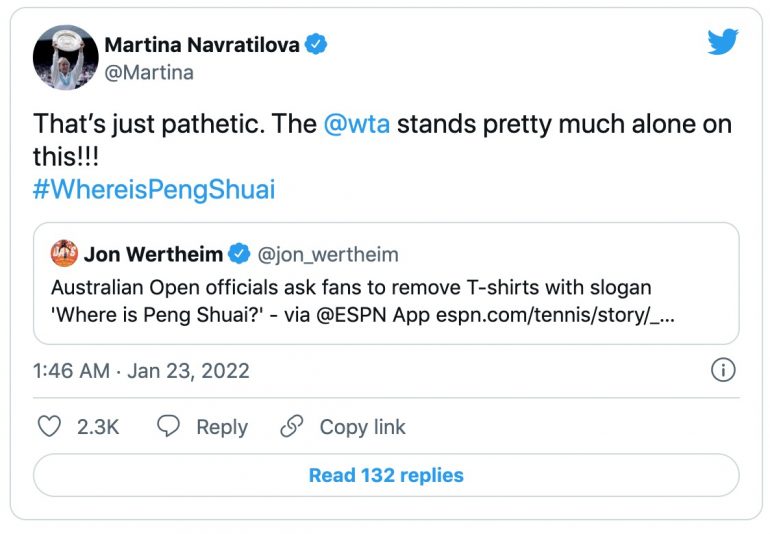 So did Nicolas Mahut.

French tennis player Nicolas Mahut also chimed in on the incident, suggesting that organisers were bowing to pressure from major corporate Chinese sponsors.

“What’s going on!? What lack of courage! What if you did not have Chinese sponsors?” Mr Mahut tweeted. —Yahoo

With the Olympics in China now only days away, let this be a reminder that the people in China are not truly free, and even the athletes — or other foreigners — visiting there do so trusting that a lawless Communist Government will not suddenly decide to hold you ransom as political poker chips until whichever country they come from agrees to terms of release.

Just ask Canada’s ‘two Michaels’ who were held as poker chips from the time a Chinese Huawei official had been arrested in Canada, until the time she was released. Officially, there was ‘no connection’ between the two events. Just like there was ‘officially’ no connection between the release of hostages in Iran and pallets of cash flown in by plane.

The Michaels arrived in Canada just one day after a British Columbia court dropped the extradition case against Huawei executive Meng Wanzhou over fraud and conspiracy charges related to American sanctions against Iran. — CTVNews

It’s to remind these people that China’s Communist Party is not our friend.