The Great Reset used to be treated by the media with all the hostility of any ‘fringe’ theory that they have decided must be seen as radioactive. But now something’s changed. Why?

In July of 2020, after hearing it mentioned on conservative radio, ClashDaily wrote one piece talking about the general concept. With COVID lockdowns, an ongoing election, daily race riots burning down cities, and all the other insanity of that summer we didn’t really dig into it, since the inner-workings of DAVOS aren’t really a primary focus of ours.

But with the ‘fundamental Transformation’ angle of it, and links that could be read right off of WEF’s own website, it was considered to be worth bringing to our readers’ attention. Anyone having the time and inclination to dig in further could certainly do so, but we turned our attention to other events in the firey (but mostly peaceful!) summer of 2020.

Since that time, Glenn Beck, on whose show the topic had been discussed, has co-authored a book on what the Great Reset is all about. Strange, isn’t it, that suddenly a topic that had been waved away as a conspiracy theory is being addressed by the media … not only addressed but addressed favorably?

Why, for example, is the DAVOS crowd so flagrantly kissing the ass of human-right-abusing dictator-for-life like Xi in a clip whose very backdrop has the words ‘DAVOS AGENDA’ on it?

Listen to the end. pic.twitter.com/ZSZ4KBAQ6f

The story we wrote in 2020 included the following direct quote by the WEF chair:

“Every country, from the United States to China, must participate, and every industry, from oil and gas to tech, must be transformed,” Schwab added. “In short, we need a ‘Great Reset’ of capitalism.”

A viral video was circulating just last week in which a woman was celebrating how wonderful it was that ‘elites’ from around the world were cooperating and doing all kinds of ‘wonderful’ things while being dismayed that the rest of us — all over the world — trust these same elites less and less.

We’ve seen this movie before. Just ask the dissidents in Hong Kong what happens to people who don’t go along with the grand plan.

You’ll need to visit them in prison first, they’re being hit with retroactive laws criminalizing the ‘heinous’ act of speaking ill of Xi’s CCP when they Hong Kongers still allegedly autonomous and free to protest.

THESE are the people WEF are so warmly embracing as leaders for the brave new tomorrow they envision for us.

The media is hard at work fact-checking on their behalf, too. Here’s Reuters. 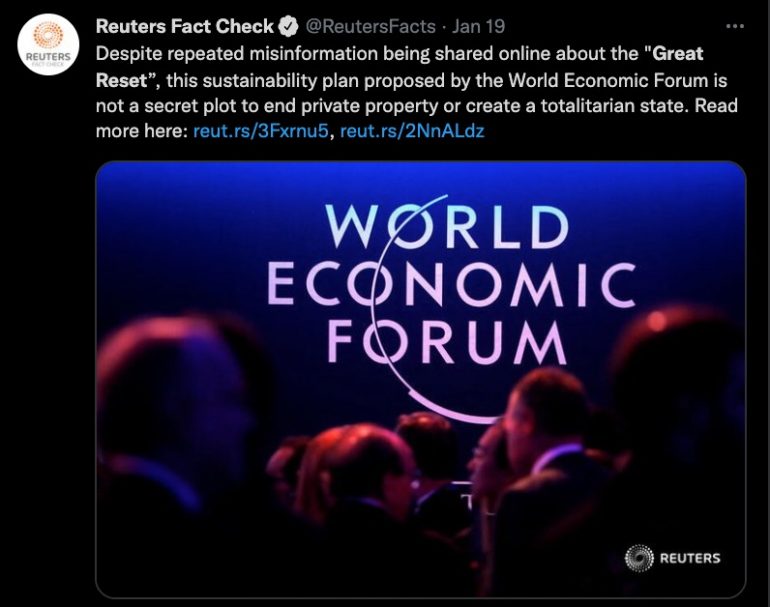 Are there any conflicts-of interests you’d care to mention, Reuters? The kind of conflicts that could call your objectivity into question?

A Reuters fact check in December missed the core concern about the “Great Reset” when it pointed out that it is not a secret plot. Its critics, in fact, agree that it’s an open plot to “reset capitalism,” with its own web page.

The plan is so ‘secret’ that it came up in conversation in the Dutch parliament, where a conservative MP questioned their PM about having received a book written by Schwab himself entitled ‘COVID-19: The Great Reset’. The exchange between the two is all the more interesting knowing it came up in the context of a parliamentary Question Period.

If Schwab himself wrote a book about it it must not be that super-secret. And the Dutch politician is citing excerpts of that plan from the book, it must not be merely a fringe conspiracy theory.

There are reasons for hope. Myriad governments have embraced ambitious plans to transition their economies toward being carbon neutral. The incoming Biden administration intends to add momentum to global climate efforts abandoned by President Donald Trump, while Chinese President Xi Jinping said last month that China plans to decrease its carbon footprint to at least 65 percent of where it was in 2005 by 2030. The World Economic Forum – a bastion of optimism – foresees a future in 2030 in which urban centers are transformed into zones shaped by pedestrian activity, technology increasingly obviates the need to own cars, fewer people eat meat, people breathe cleaner air and renewable, clean energy dominates the energy sector.

Schwab is a billionaire who has detailed his plan for the very near future: the following words have been attributed to him: ‘you will own nothing, and be happy’.

Have you ever noticed how these people never radically redistribute their OWN wealth or transfer control of it to any government? Then on what moral authority should they have any designs on the redistribution of someone else’s?

How can you prove these guys are nothing more than power-brokers leveraging greater control into fewer hands? Well, besides their warm relationship with Dictator Xi, look at their own example.

They want to destroy the fatcats to help the poor, do they? The easy way to do that is for them to throw their own wealth on that pyre first. If they flinch at that idea now, they’ll flinch in the future, too, and find some ‘offshore’ solution to plans that would destroy the rest of us.