From gain-of-function funding and the origin of the virus to the suppression of therapeutics and mRNA vaccines — and the government attempt to cover it all up. It’s all in the documents.

Project Veritas released a video on Monday night that raises some very serious questions about our entire pandemic response and what our government knew and when.

It is quite something.

Project Veritas has obtained a report written by Marine Corps Major Joseph P. Murphy about the origin of the COVID-19 pandemic and the response to it. Major Murphy was affiliated with the Defense Advanced Research Projects Agency (DARPA) and produced the memo after leaving the agency. Project Veritas was clear that the documents were not leaked to them by Maj. Murphy, but were hidden in a top secret shared drive.

The memo confirms a report in September by a group of internet sleuths investigating the origin of the coronavirus that stated that Peter Daszak’s EcoHealth Alliance had filed an application for funding with DARPA proposing to study bat coronaviruses in Wuhan, China in 2018 through DARPA’s Preventing Emerging Pathogenic Threats (PREEMPT) grant opportunity.

But there’s so much more going on.

In the memo, Maj. Murphy was writing with regard to the government mandate for vaccination of military personnel, “Decisions with regards to the vaccines do not appear to be informed by analysis of the documents.”

There are four main points that he addresses in this context that raise a helluva lot of questions for the rest of us that have been living with the virus and, more importantly, the government’s response to it for almost two years now.

Major Murphy’s report goes on to detail great concern over the COVID-19 gain of function program, the concealment of documents, the suppression of potential curatives, like Ivermectin and Hydroxychloroquine, and the mRNA vaccines.

Project Veritas reached out to DARPA for comment regarding the hidden documents and spoke with the Chief of Communications, Jared Adams, who said, “It doesn’t sound normal to me,” when asked about the way the documents were shrouded in secrecy. “If something resides in a classified setting, then it should be appropriately marked,” Adams said. “I’m not at all familiar with unmarked documents that reside in a classified space, no.”

“Who at DARPA made the decision to bury the original report? They could have raised red flags to the Pentagon, the White House, or Congress, which may have prevented this entire pandemic that has led to the deaths of 5.4 million people worldwide and caused much pain and suffering to many millions more.”
Source: Project Veritas

Are they saying that the U.S. government may have had a whole lot more to do with the origin of this virus than anyone has admitted, the military concealed that there were successful therapeutics that could have saved lives while allowing those same medications to be vilified by the press and even banned by local jurisdictions as they pushed for vaccines knowing that they wouldn’t be very effective?

And that the prevaricating, authoritarian smurf has been lying through his double masks this whole time about gain-of-function funding and the possible lab leak?

Fauci and Collins worked to discredit critics with Google’s assistance because he “is the Science.”

Is that what’s happened here?

The documents obtained by Project Veritas are available online:

Maj. Murphy was contacted by Project Veritas to comment on the documents. Here is his response:

I offer no comment on the investigation or internal Marine Corps deliberations. I offer a brief comment to those that desire answers and to those that withhold them:

To those seeking answers, I offer encouragement. There are good people striving for the truth, working together in and out of government, and they succeed.

To those that withhold, I pray for you. Find the moral courage to come forward. Don’t let a lie be our legacy.

People will forgive. A commitment to truth is at the heart of this nation.

Maj. Murphy seems optimistic about the ability for Americans to forgive, but that looks like an uphill battle if what his report says is true. If he’s right, then it means that the DOD suppressed knowledge of cheap, readily-available lifesaving treatment as the world was in a global pandemic and Big Pharma was pushing universal vaccinations with a new vaccine that clearly doesn’t work as promised.

All while governments around the world used behavioral nudges to induce fear and exert control over citizens.

Lives were lost to COVID, suicide, other illnesses that weren’t treated. Businesses were shut down, careers, legacies, finances destroyed, children’s education and development were affected, there was social isolation, depression, anxiety, addiction, mental illness, and so many more devastating effects of this horrible pandemic response.

That is, to quote the current President, a “big effing deal”!

Someone needs to be accountable if this wasn’t a naturally-occurring virus, just as China continues to need to be held accountable for their response that encouraged the spread of the virus all over the world while protecting their own citizens.

After the exposé was released, Twitter suspended the account of Eric Spracklen, Chief of Staff for Project Veritas. 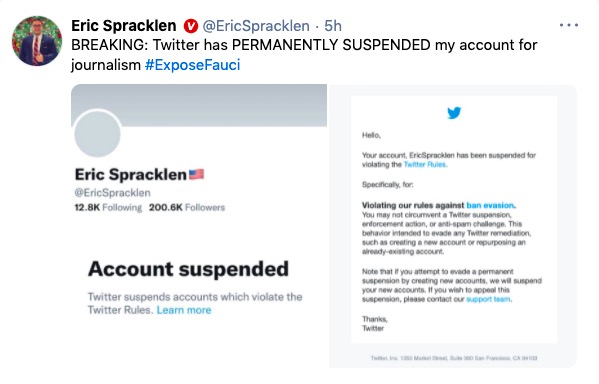 Spracklen posted a video on Gettr with a timeline of what caused his suspension. It had something to do with the hashtag #ExposeFauci.