The left has been strategically using “fact checks” as a weapon against opponents and a tool to shape the news cycle. They’ve been wildly successful so far.

For the last week or so, the phrase “Mass Formation Psychosis” has been spreading on social media as a result of a Joe Rogan podcast interview of Dr. Robert Malone, whose work was instrumental in the development of the mRNA technology used in some of the vaccines for the coronavirus, using the phrase to describe the current pandemic situation and likening it to 1920s and 1930s Germany.

“When you have a society that has become decoupled from each other and has free-floating anxiety, in a sense that things don’t make sense, we can’t understand it. And then their attention gets focused by a leader or series of events on one small point, just like hypnosis, they literally become hypnotized and can be led anywhere,” said Malone.

Here is a longer segment with Dr. Malone speaking to Rogan. He started by talking about propaganda and how it is telling people how to think about the pandemic.

He made some very interesting points about the incentives that motivate Corporate Media, Big Pharma, and politicians.

The pandemic paranoiacs went mad — the video was pulled from YouTube, Twitter permanently banned Dr. Malone, and anyone using the phrase “mass formation psychosis” was lambasted on social media.

Rep. Troy Nehls (R-TX) submitted the entire transcript of the podcast into the Congressional record.

Suddenly, the “fact-checks” were released. Left-leaning PolitiFact massaged some facts to discredit Dr. Malone as an “anti-vaccine darling.”

But it was Twitter that had a thread in the newsfeed that featured an article by the Associated Press attempting to “debunk” the “mass formation psychosis” statement of Dr. Malone. 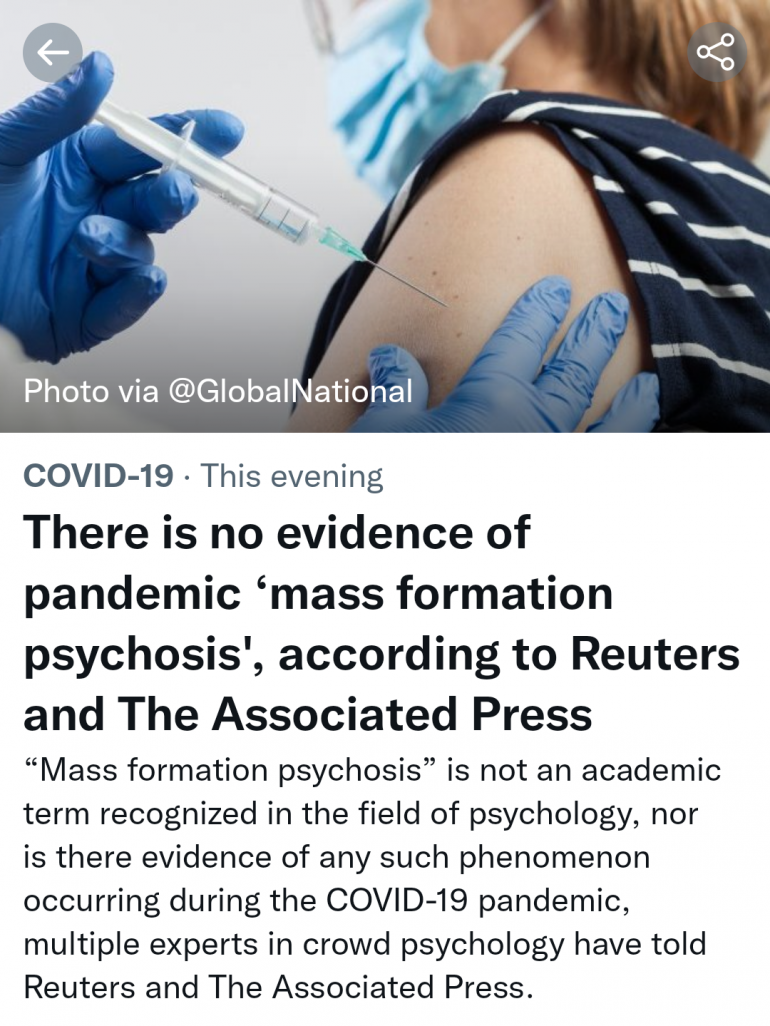 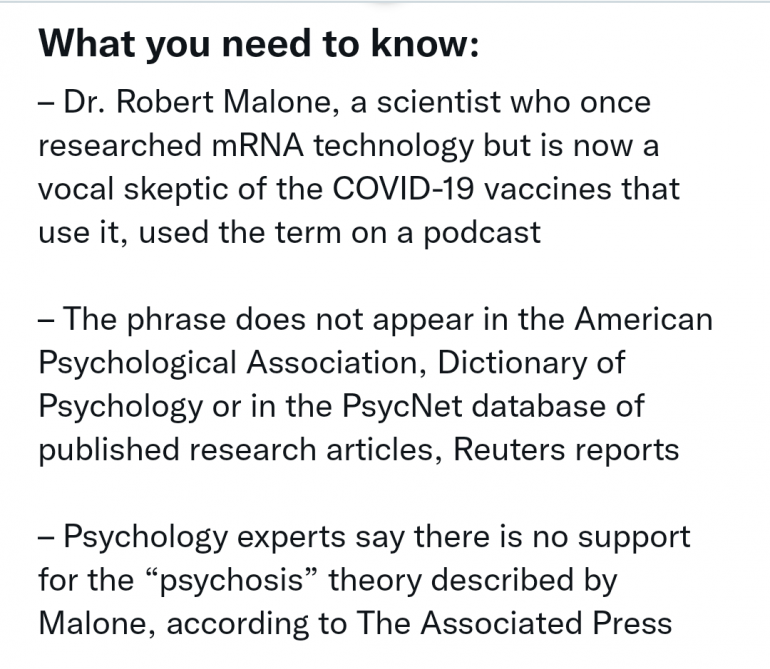 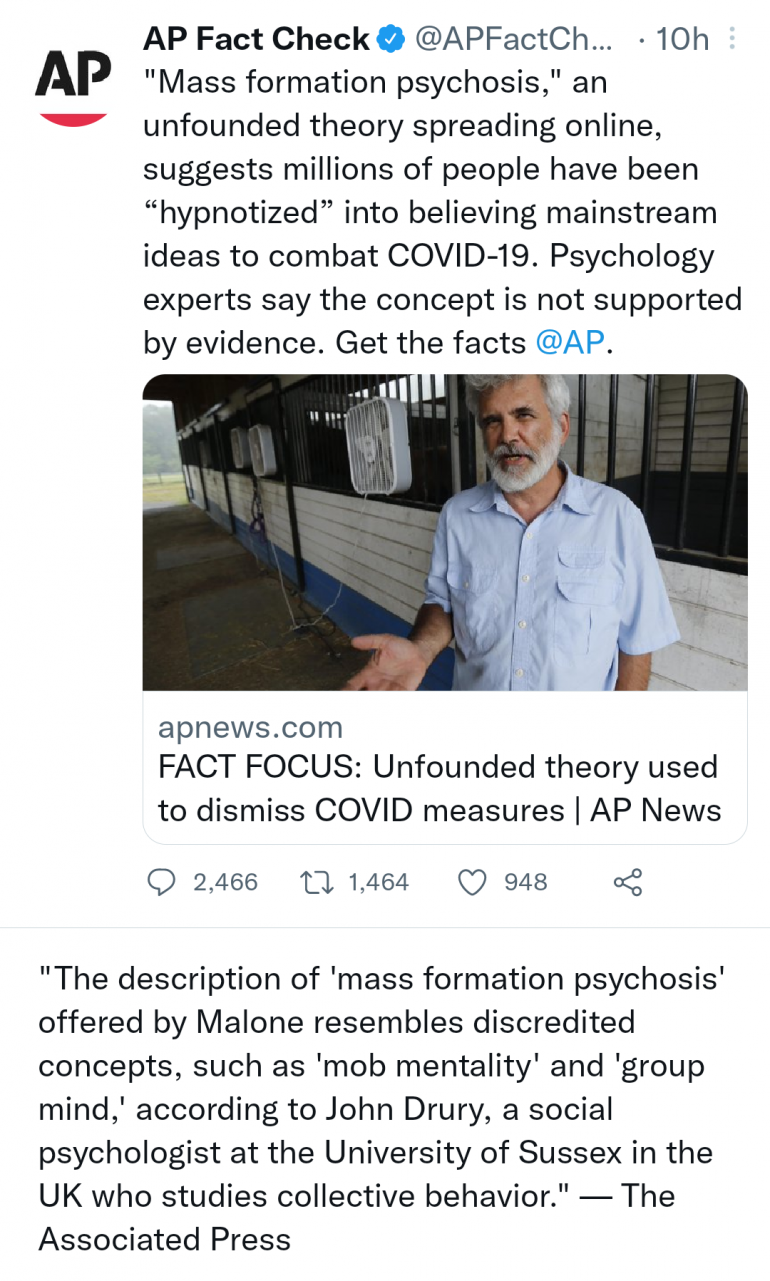 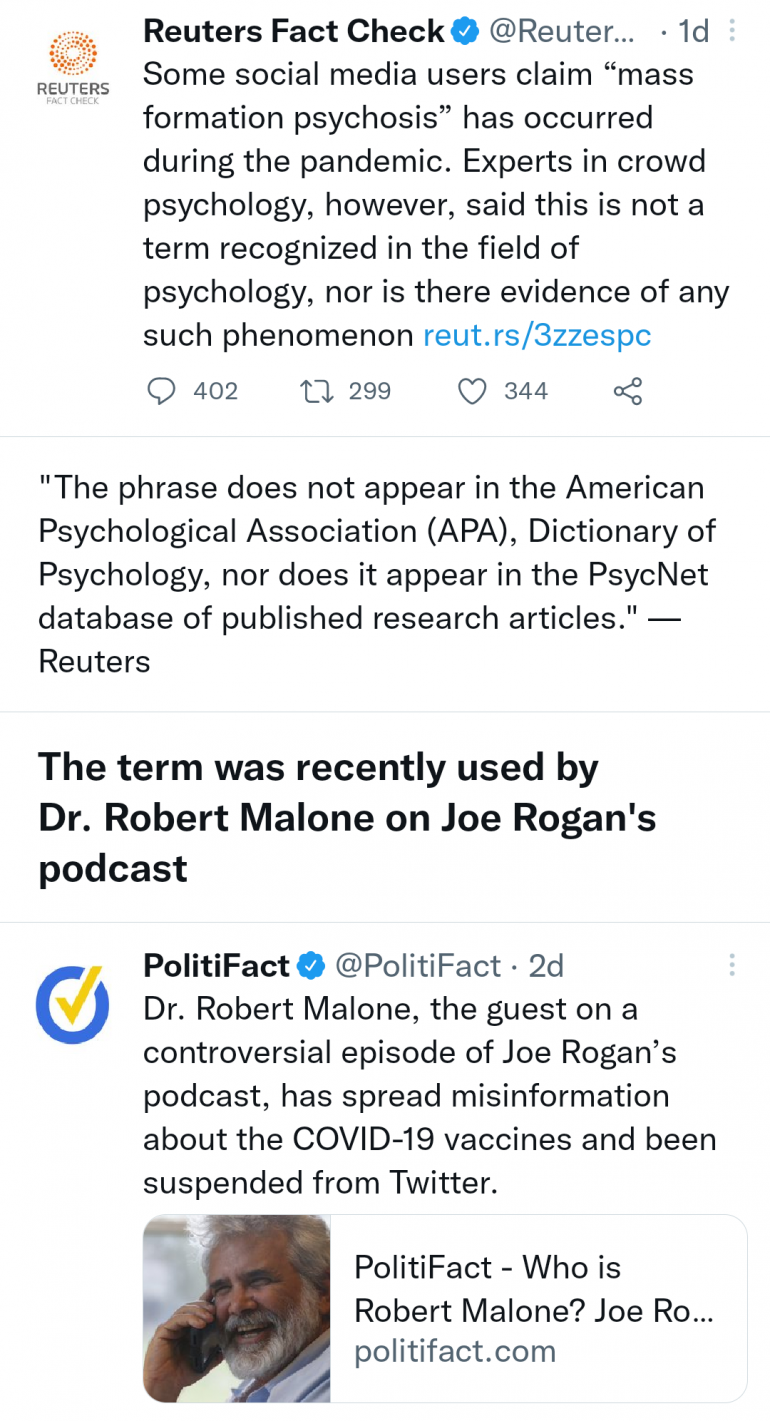 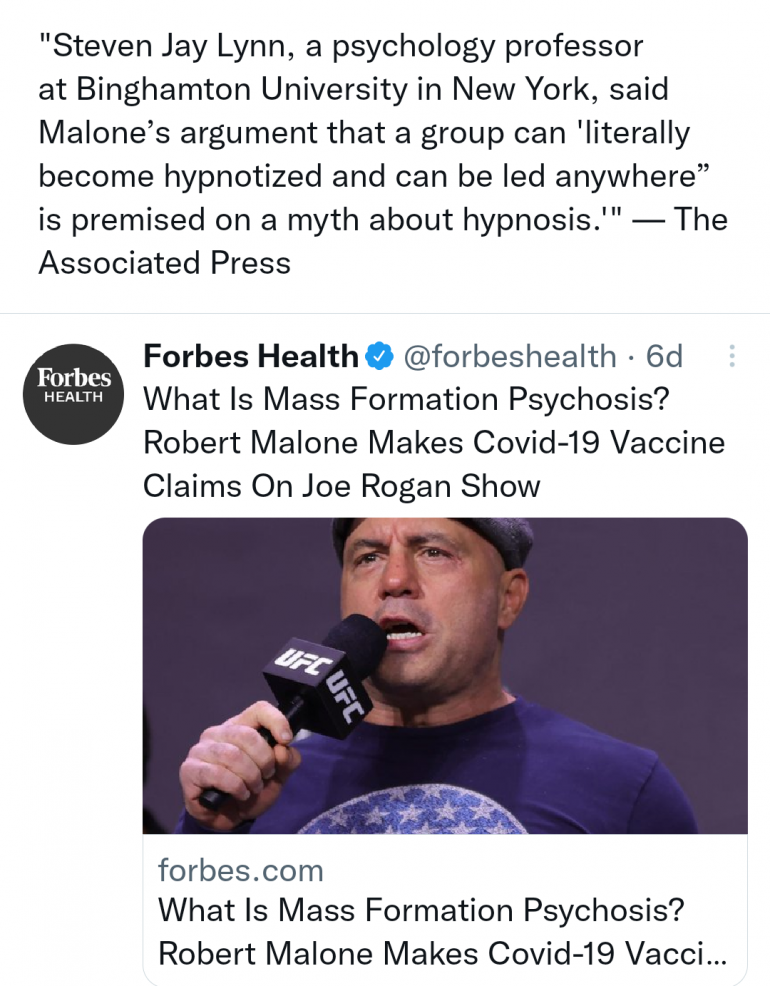 What’s interesting is that one of the “experts” cited by the Associated Press is Dr. Jay Van Bavel, an assistant professor of Psychology and Neural Science at New York University, who wrote articles on using behavioral science to “nudge” people into behavior that the government preferred during the pandemic.

He also quoted Nazi propagandist, Joseph Goebbels in a now-deleted tweet that read, “A horrifying feature of cult psychology: ‘Propaganda works best when those who are being manipulated are confident they are acting on their own free will.’ – Joseph Goebbels.”

New York University assistant professor of psychology and neural science Jay Van Bavel, who “co-authored a book on group identities,” has made claims that the only way to fight COVID-19 is for everyone to change their behavior until such time as a vaccine came along. And how to get everyone to change? “We have to think through the lens of behavioral science,” Van Bavel wrote. “What can we do to nudge and encourage and cajole and motivate people to do the right thing?”

Van Bavel also used a quote from notorious Nazi general Joseph Goebbels to point out that propaganda is most insidious when the “manipulated” public believes they are “acting on their own free will.”

Van Bavel seems to believe that he is not guilty of either spreading or believing propaganda, manipulating people or being manipulated. 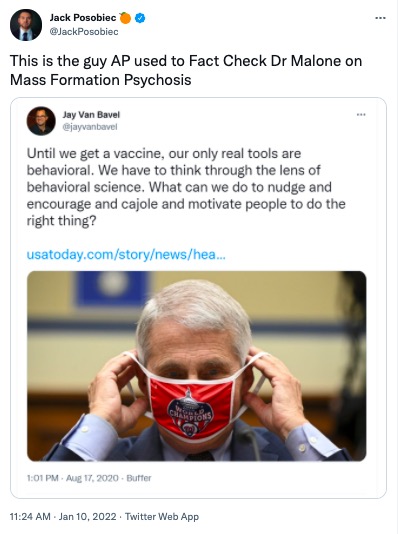 He followed up with a trio of screenshots.

A play in 3 acts pic.twitter.com/wohHXCzqoA 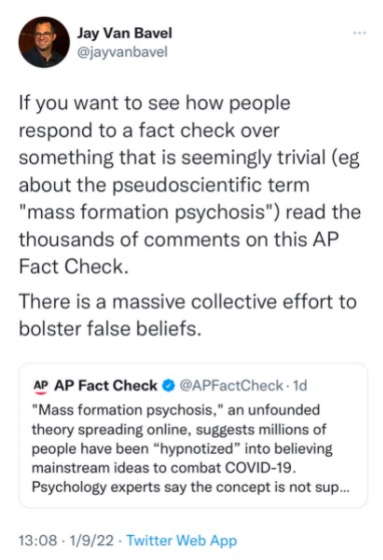 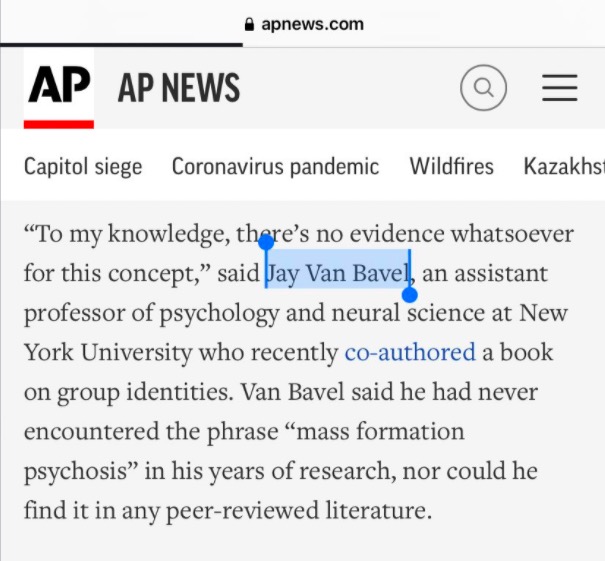 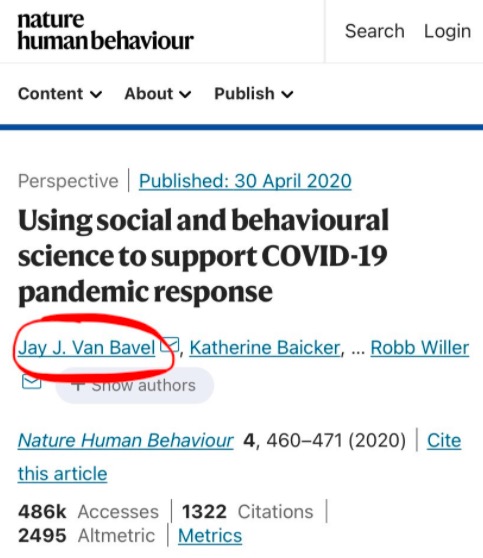 So, the Associated Press used an “expert” who allegedly didn’t know what Dr. Malone was talking about because he hadn’t encountered the phrase “mass formation psychosis” but is a big advocate for using behavioral science to “nudge” people into the “right” government and Big Pharma approved behavior during the pandemic?

But hey, it’s not like this completely validates what Dr. Malone said in his video of the people complicit in mass formation psychosis immediately attacking anyone who questions the narrative because they are “other” and should be silenced.

Oh, and after getting a bit of scrutiny, Van Bavel ranted on Twitter that there’s no such thing as “mass formation psychosis” and he can tell because there is a “massive collective effort to bolster false beliefs.”

Is anyone going to tell him that that is what Dr. Malone was talking about?

There is a video of Dr. Jay Van Bavel on the American Psychological Association’s YouTube channel sharing a presentation he gave to the World Health Organization titled, “Using Social and Behavioral Science to Support COVID 19 Pandemic Response.”

In a Nature article in 2020, Van Bavel posited that “insights from the social and behavioural sciences can be used to help align human behaviour with the recommendations of epidemiologists and public health experts.” What is this if not an attempt to push people to do what they’re told?

The article addresses using fear as a means to control people, in the right doses: “A meta-analysis found that targeting fears can be useful in some situations, but not others: appealing to fear leads people to change their behaviour if they feel capable of dealing with the threat, but leads to defensive reactions when they feel helpless to act. The results suggest that strong fear appeals produce the greatest behaviour change only when people feel a sense of efficacy, whereas strong fear appeals with low-efficacy messages produce the greatest levels of defensive responses.”

Van Bavel deals with how to deal with “optimism bias” in a population, as well as risk perception, emotional responses, and how the “global pandemic may also create opportunities to reduce religious and ethnic prejudice.”

He wrote that “People’s behaviour is influenced by social norms,” but that “Changing behaviours by correcting such misperceptions can be achieved by public messages reinforcing positive (for example, health-promoting) norms.”
Source: The PostMillennial

Have you ever noticed how the left isn’t “fact-checked” as vigorously as the right despite the bizarre and even irrational claims not based on actual reality? Yeah, there’s a reason for that.

Facebook recently admitted what that reason is after being sued for defamation by John Stossel after labeling two of his videos on climate change as “false” and reducing the reach of that content on the platform as a result.

On Sunday, Drew Hernandez hits the nail on the head in a short tweet. 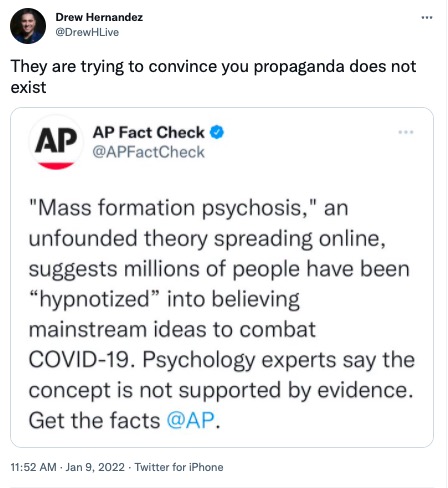 The New York Post has a must-read exposé on who is behind some of these “fact check” organizations that “track disinformation” and it’s what you’d expect — a bunch of leftists who want to label statements that they disagree with as “false.”

The bankrollers of one new project — with the Orwellian name “Good Information Inc.” — are billionaires George Soros, who seems to have his finger in every pie when it comes to shoving a leftwing, globalist, anti-American agenda down our throats, and LinkedIn founder, Reid Hoffman, who is one of Silicon Valley’s top donor to Democrats. It’s all going to be run by Democratic strategist Tara McGowan. Basically, it’s all a shady dark-money operation to push leftwing propaganda and label right-leaning perspectives as “disinformation.”

Actually, they aren’t so fond of left-leaning ones that buck the narrative, either.

Gee, why is it that Americans have so little trust in the Corporate Media these days?

It sure is a mystery!