In case you haven’t noticed yet, the era of yellow journalism is back with a vengeance. There is no interest in explaining the 5W’s when they have an opportunity to promote their team.

Maybe we wouldn’t mind as much if they didn’t pretend to be ‘objective’ or ‘mainstream news’. Or if they would at least get the facts right before they begin to spin them.

Two ‘mainstream’ news orgs have not returned the Pulitzers they got for reporting on an entirely manufactured Russian Collusion crisis, which is very on-brand for the media these days, and they have just got caught with their hand in the cookie jar yet again.

How do we know this is corruption and not ordinary human error? Simple — you will notice that the ‘mistakes’ these ‘reputable media sources’ make never put the Republicans in a better light than the facts would suggest they deserve, nor the Democrats in a worse light.

Let’s look at the latest ‘error’… starting with the truth itself and then going back to the ‘reporting’.

Chief Justice Robers made it clear that what was said about mask requirements among SCOTUS was incorrectly reported.

Isn’t it weird then, that CNN claims to have independently corroborated a story that has been debunked as false, while claiming FOX News was a liar in the process? 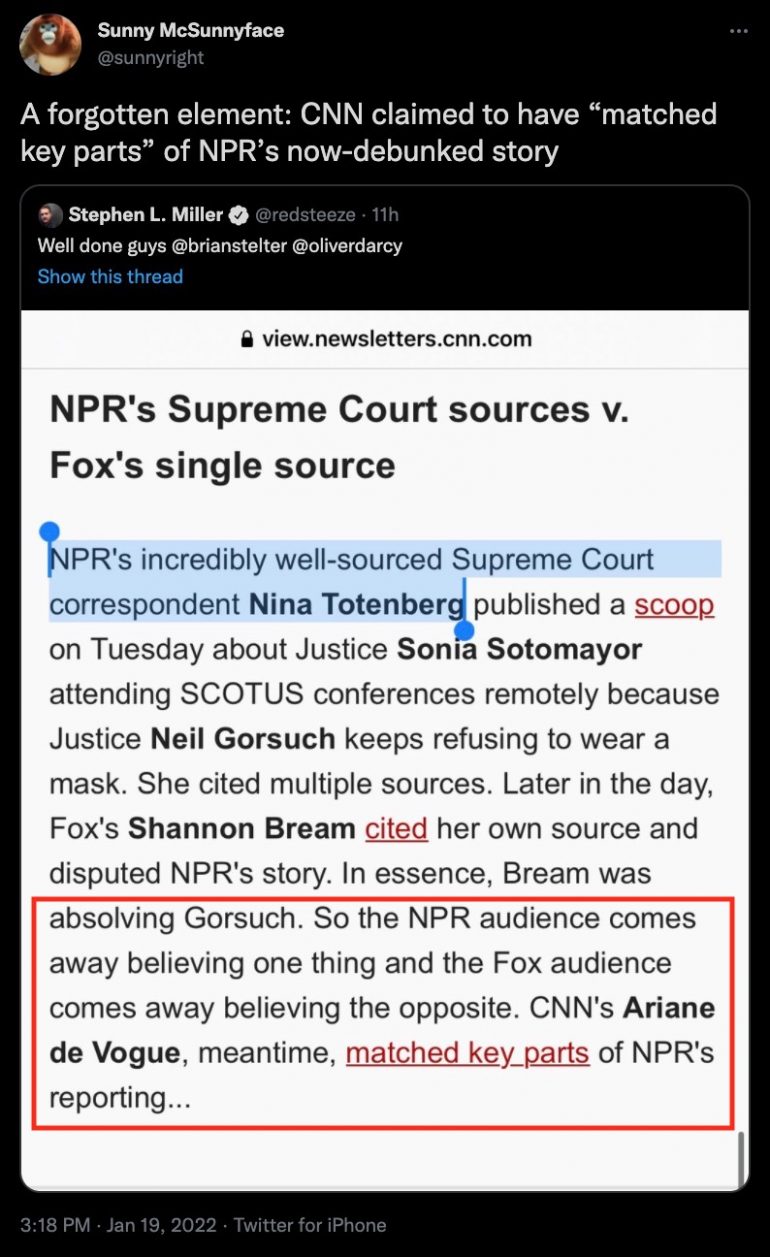 Drew Holden gave us a fantastic tweet thread bringing the receipts. (Click here to see the whole thing.) Here are some highlights.

He begins with the manufactured ‘conflict’. 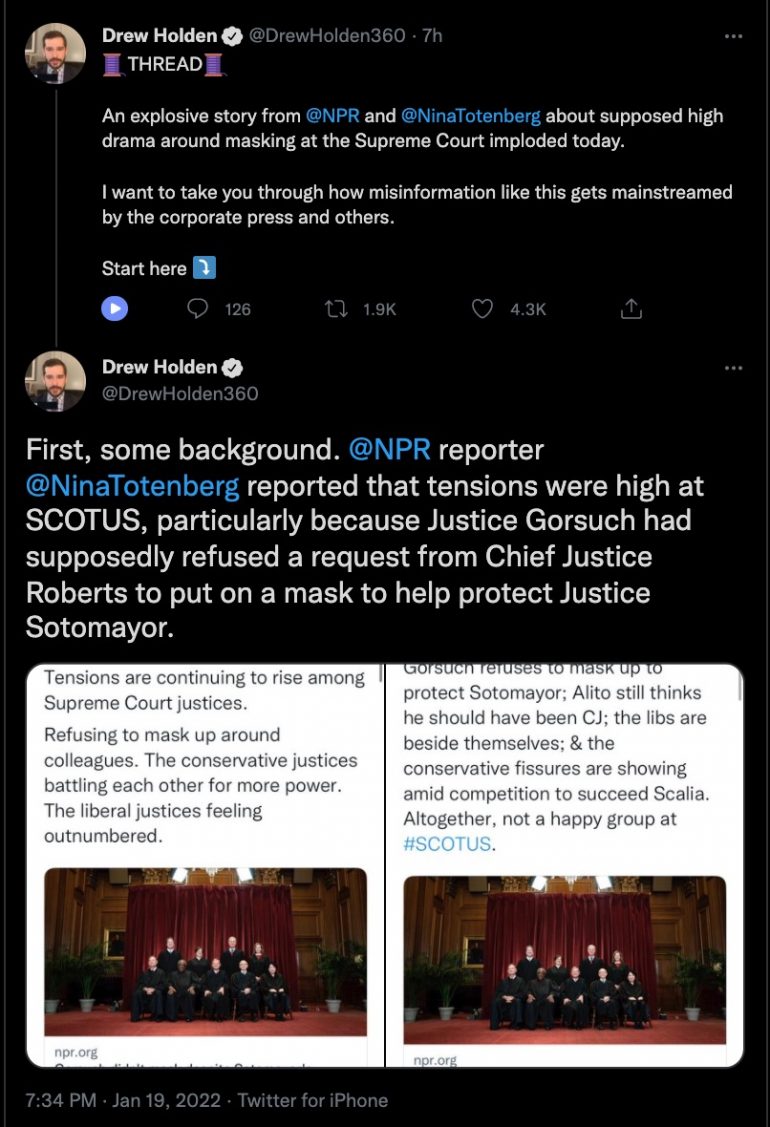 He mentions the story being discredited by Gorsuch, Sotomayor, and Roberts. But the media has already decided this is a story worth pushing.

I’ll bet they all used their ‘serious’ voices when telling these stories too.

Send in the clowns… 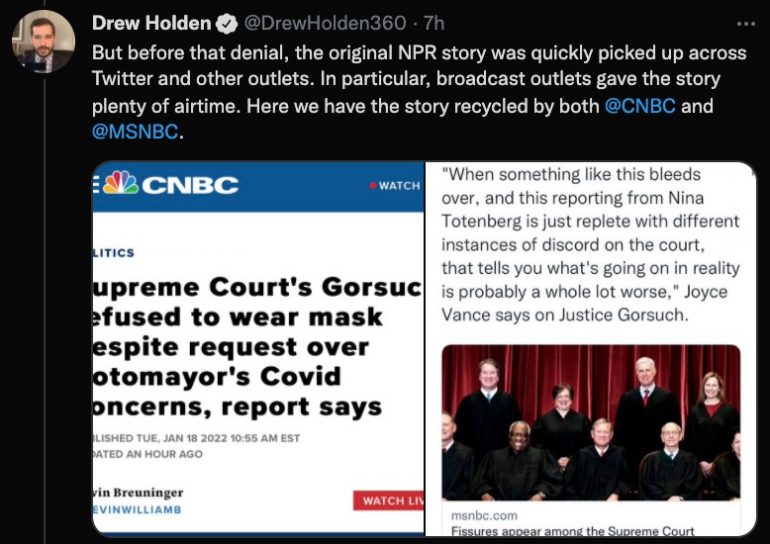 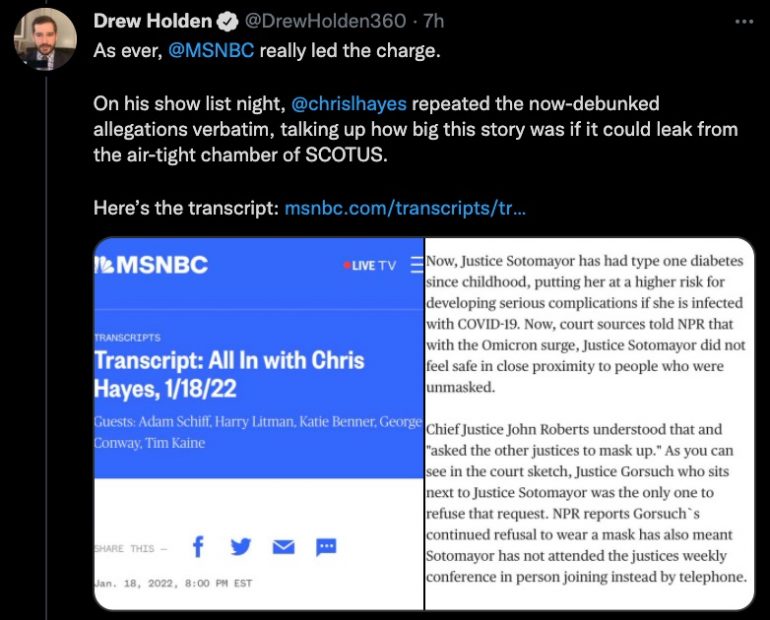 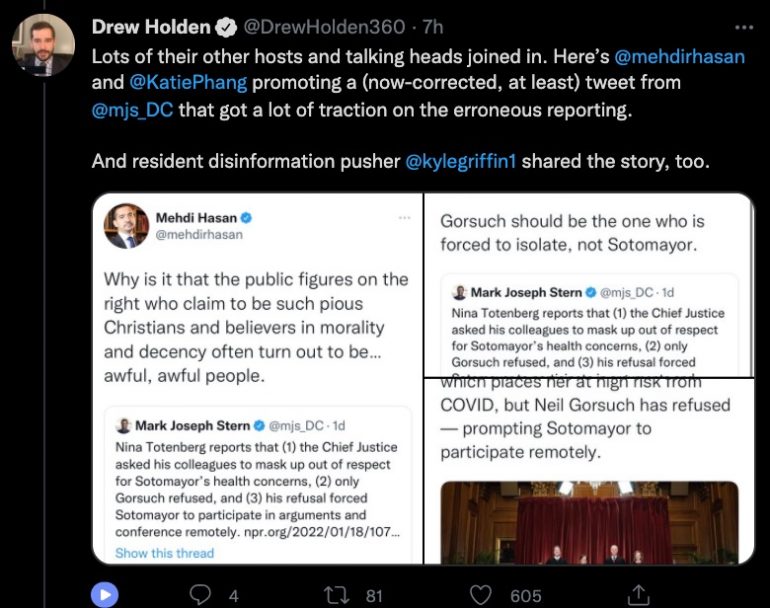 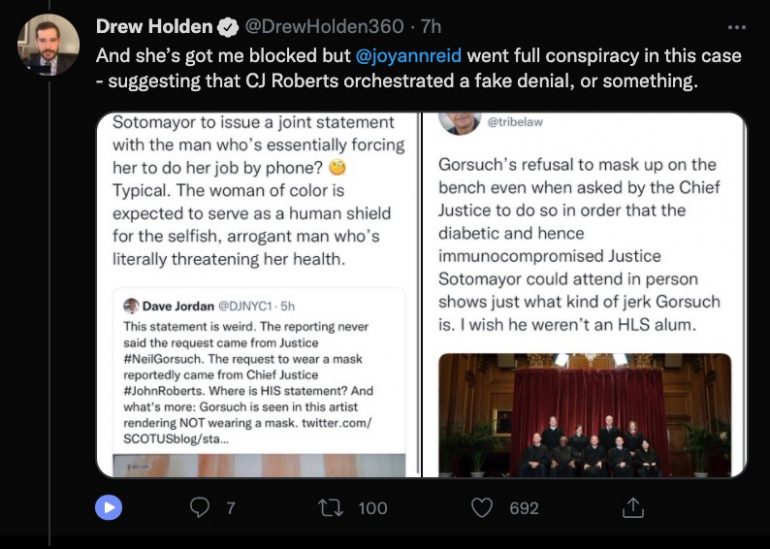 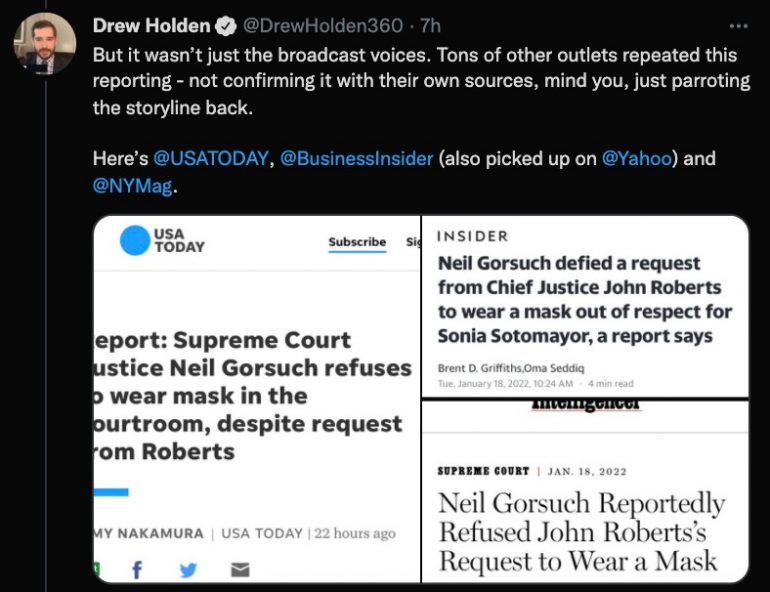 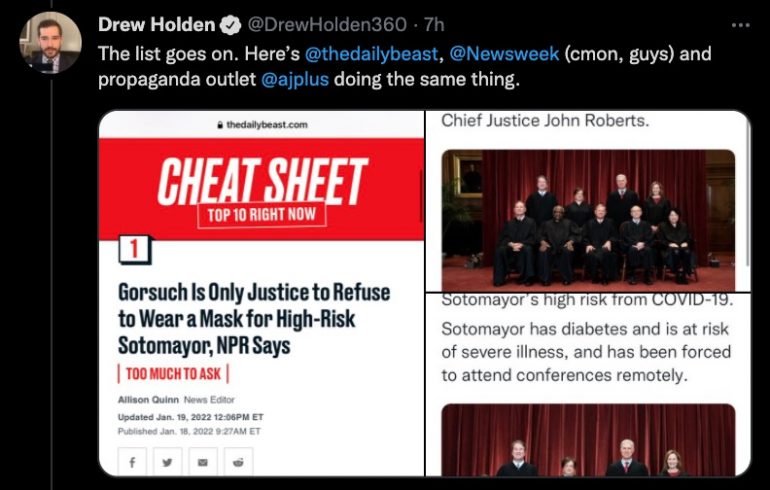 He then goes on to name a whole rogue’s gallery of scoundrels flunkies and half-wits from media and social media who pounced on the story.

Predictably they took this opportunity to dunk on a hated Trump appointee as ‘the enemy’. I guess they never read what their hero RBG said about ‘disagreeing without being disagreeable’.

We’ll include this clown because he so richly deserves the contempt. I bet he thought that photo was really clever, too. Have you wondered lately who this supposedly ‘principled conservative’ was bankrolled by? 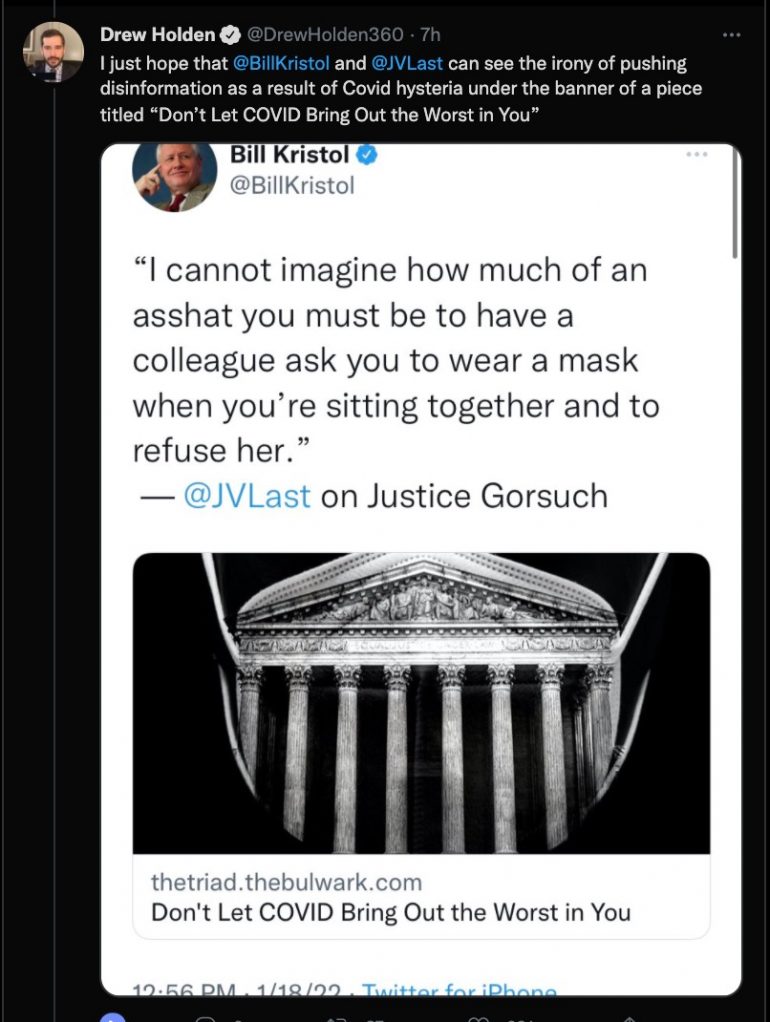 Drew ended his thread with some excellent observations and criticisms. 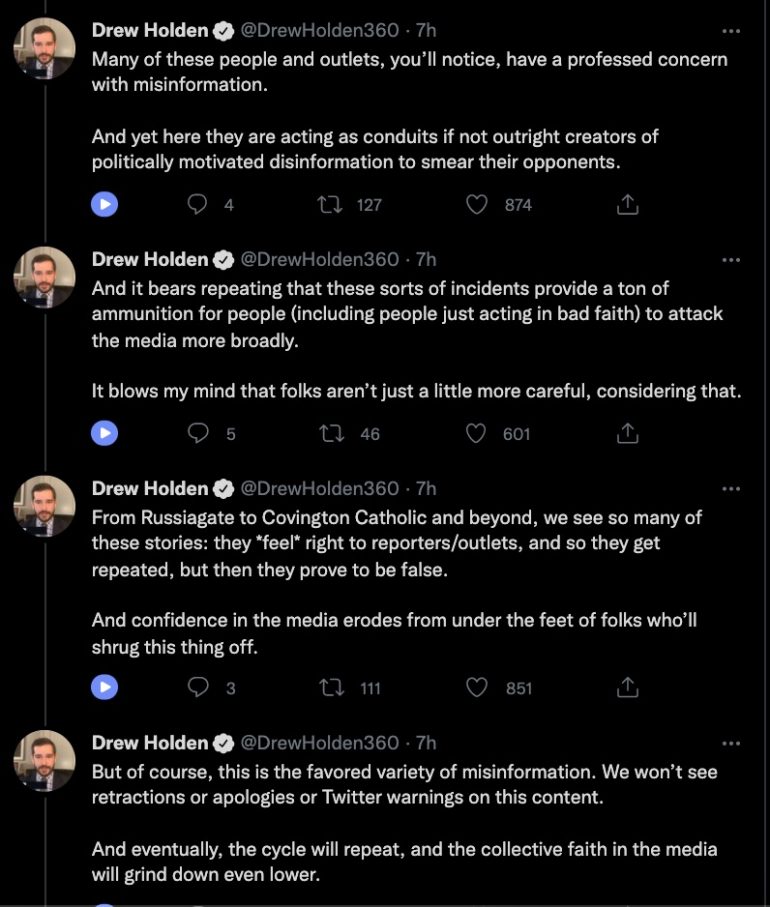 If the media’s bar gets any lower, a snail could slide over it.

Anyone in the media wanting to be able to look themselves in the mirror should tattoo this parting advice backward across their forehead so they see it in the mirror every morning.

Is there any wonder these clods are so desperate to shut down dissenting voices like ClashDaily’s?