One big difference between a Constitutional Republic and a totalitarian state can be seen in whose interests law enforcement serves.

A free people can reasonably expect that law enforcement, if they haven’t become corrupt, will investigate instances of criminal behavior that harm, in some way, the public at large.

As we have seen in places like East Germany, the Soviet Union, or modern China, a police state has very different uses for its police forces. They exist to protect the interests of the state — in other words, the ruling party.

Unauthorized non-conformity will be punished swiftly and severely… as we saw in Tiananmen Square, or more recently, in the retroactive criminalizing of Hong Kong’s student protesters.

Surely we would never see such a thing in America, right? We would never weaponize our legal system to destroy our political enemies HERE, right?

Well, when Pfizer itself mentioned a conversation they had with the feds, Fitton’s watchdog group ‘Judicial Watch’ got curious, and wanted to know more about it. So they FOIAed some papers.

Obviously, there is, on the face of it, no legitimate just cause that a corporation should be sicking any federal agencies on a journalist — especially when they had just exposed some embarrassing, and more importantly narrative-disrupting, information about them. And yet, this is Joe Biden’s America, and he learned at the feet of Obama, who obviously didn’t mind trampling journalists’ rights when he felt it was expedient to do so.

What ‘disinformation’ could Pfizer have been upset about? Probably this story from October: PFIZER WHISTLEBLOWER: Internal Emails On Vaccine Didn’t Want Info On Fetal Cells ‘Floating Out There’

The fetal cells argument gives additional weight to someone making a religious objection to ‘getting the jab’. And that could potentially hurt both Pfizer’s bottom line, but it also made the Biden’s vax mandate that much more difficult to roll out.

The answer they got back from the FOIA request was shocking. They ‘cannot release’ the requested FOIA documents because it is connected to pending legal action. 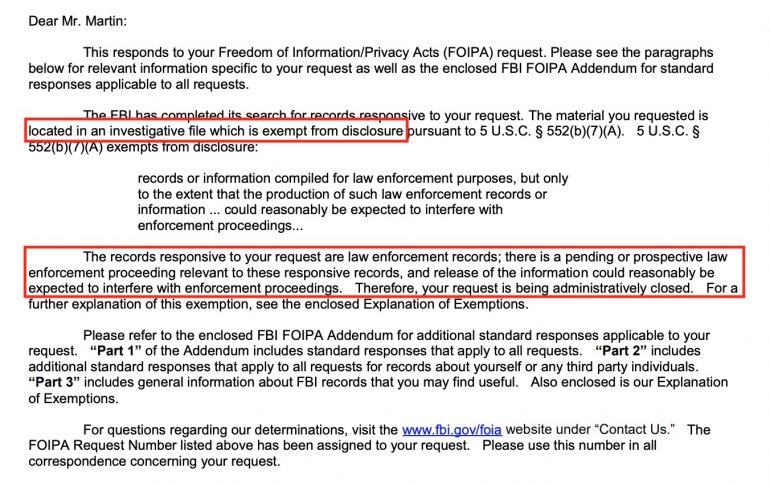 Is the same legal body that got slapped down by a judge for passing a journalist’s privileged phone information to the New York Times — against whom it had a pending legal case — building a criminal case against Project Veritas?

Is this retribution for their repeatedly publishing information that was embarrassing to the current administration’s primary political goals, especially concerning COVID 19?

Project Veritas has been a thorn in the side to the COVIDicatators from the beginning.

They exposed internal military documents about the nature of the virus and DARPA turning down Eco Health Alliance for precisely the kind of gain-of-function research that could have played a role in the current crisis. BOMBSHELL: Secret Military Docs In Project Veritas Exposé Raise Questions About EVERYTHING Relating To COVID (VIDEO)

At the beginning of the outbreak, they challenged the objectivity of the official COVID fatality numbers citing people who had died of other factors but were called COVID statistics. PROJECT VERITAS: Here’s Why NY Funeral Homes Are Calling BS On COVID Stats (Video)

Or a nurse with a hidden camera talking with co-workers about vaccine injuries and heart problems before that had cut through the narrative. WHISTLEBLOWER: Project Veritas Hidden Video Exposes Adverse Effects Of ‘THE JAB’

Or a J&J employee speaking a little TOO candidly about his product. J&J EXPOSED: What Employees Say When They Think Nobody’s Looking (Project Veritas Video)

If you believe that, you must have starry-eyed naivety and have no knowledge of the phrase ‘Crossfire Hurricane’, or the related railroading of a certain General Flynn. And where would we even begin with the January 6 Inquisition?

Remember just a few short years ago when Hollywood joined in lockstep denunciation of Donald Trump for being a ‘threat’ to journalism? Have you heard any of them raise their voices in protest at all when the Feds are being used to harass journalists who don’t sing from the left’s own songsheet? Of course not. They don’t care about rights, they care about scoring points against the ‘enemy’.