That’s right, Hunter’s laptop is the gift that keeps on giving. Another of the photos of the Bidens hobnobbing with foreign nationals and business partners just bit Joe in the keester at a really awkward moment.

Corruption still runs rampant in the old Soviet block nations that were once locked behind the Iron Curtain, and the difference between good guys and bad guys is hard to tell.

But one thing is sure, having an old buddy facing charges of treason just a few days after LARPing as the great defender of democracy is the worst kind of timing. The fact that the investigation began on the 6th is just an irony cherry on top.

“On January 6 of this year, the National Security Committee launched a pre-trial investigation into the fact of high treason, under Article 175 of Part 1 of the Criminal Code of the Republic of Kazakhstan. On the same day, on suspicion of committing this crime, former Chairman of the KNB K.K. Massimov was detained and placed in a temporary detention center. and other persons, ”the KNB said.

…They talked about the probable “treason” on the air of the state-owned “Khabar 24” – allegedly some people in power and in law enforcement agencies wove a conspiracy against President Kasym-Zhomart Tokayev. — TheCentralAsia

Radio Free Europe’s description of the situation makes interesting use of the word ‘authoritarian’.

The January 8 announcement of the arrest on suspicion of treason of the former head of the Committee for National Security (KNB), Karim Masimov, was the clearest indication yet that while security forces continue their “anti-terrorist” operations around the country, another battle is being waged between Kazakhstan’s most powerful officials.

…Toqaev’s action after the outbreak of the mass protests to remove Nazarbaev from his role as chairman of the Kazakhstan’s Security Council on January 5 and the subsequent arrest of Masimov were the first signs that he was cleaning house.

Masimov has been a very powerful man in the government for more than 20 years, serving two stints as prime minister under the authoritarian Nazarbaev. Before that he was transport and communications minister, economy and budget planning minister, state secretary, and head of Nazarbaev’s presidential administration before becoming KNB chief in 2016. —RFE

Not only are he and Hunter featured in a photo with the man now accused of treason, but the photo, taken during his term as Veep, reinforces previous allegations of a Biden family Pay-for-play scheme, and throws cold water on Joe’s claim that he had no knowledge of Hunter’s business dealings. 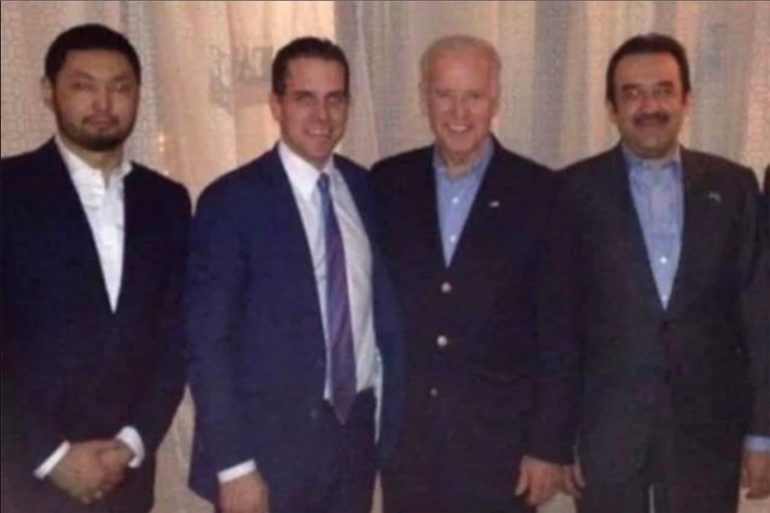 Hunter Biden worked with Rakishev — who has family ties to the regime of former Kazakhstan President Nursultan Nazarbayev — to find US investments for his $300 million-plus fortune between 2012 and 2014, the Daily Mail has reported.

…The unverified image of the Bidens, Rakishev and Massimov was posted online in 2019, according to a website timestamp, by the Kazakhstani Initiative on Asset Recovery, which didn’t say where or when the photo was shot.

But on Wednesday, The Post exclusively revealed that Joe Biden met with Ukrainian, Russian and Kazakhstani business associates in Cafe Milano’s “Garden Room” on April 16, 2015, while he was vice president under President Barack Obama.

The guest list for the event included “3 seats for our KZ [Kazakhstan] friends,” according to an email Hunter Biden sent to his then-business partner Devon Archer three weeks earlier.

Those invitees weren’t identified further, but Archer was invited to a “small private breakfast” in Massimov’s suite at the Willard Hotel the morning of the gathering, another email shows. —NYPost

Because the Hunter corruption story is such a rich vein of information, we’ve covered this guy before. Here’s what we said then: