It seems that everyone is headed to the Sunshine State — even Democrat politicians that have been openly critical of Governor Ron DeSantis’s handling of the pandemic.

Congresswoman Alexandria Ocasio-Cortez (D-NY) was spotted sipping cocktails outdoors and smooching an HIV-positive celebrity in Miami as her home state was recording record high COVID cases — which is awkward after mocking Senator Ted Cruz (R-TX) for taking his family to Mexico after a freak winter storm hit Texas in February 2021. AOC has been a big fan of lockdowns, masks, and vaccine mandates as well as openly criticized the way that red states have handled the pandemic.

And now, her colleague from another lockdown state that has been heavy-handed throughout the pandemic was spotted there as well.

Rep. Eric Swalwell (D-CA) was photographed maskless in the free state of Florida just a few days after he blamed Republicans for prolonging the pandemic.

[AUTHOR’S NOTE: To be very clear to Congressman Swalwell — before he pulls the AOC move that criticism is because right-wingers find him hot *retching* or something — you being spotted maskless in South Beach is a news story because you think you’re above the rules, not because I want to date you. I just want to make that perfectly clear right off the bat. *shudder*]

On December 30, Swalwell tweeted, “As we end 2021, mired in a deadly pandemic, you should know who has prolonged it. THESE GUYS. Republican liars. Your vacation cancelled. your kids back to virtual learning. And back to masks everywhere. For blame look no farther than #TheseGuys.” He linked to a screenshot of the House Judiciary GOP tweet that questioned the booster shots with the spread of the Omicron variant. 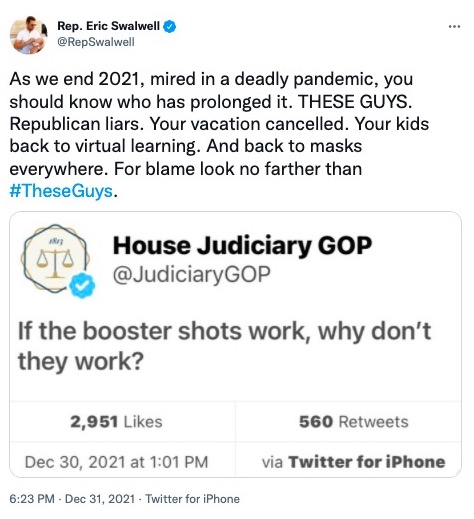 But it seems that Swalwell was able to continue his vacation plans — he was spotted at the swanky Loews Miami Beach Hotel.

The 41-year-old was seen in exclusive DailyMail.com photos Tuesday chatting with a female friend at the lobby of the four-star hotel while looking after his infant son.

Despite being out of his usual office attire, it wasn’t long before the congressman was recognized and approached by bystanders who took note of his unlikely visit to the Sunshine State.

‘When a guest saw [Swalwell] sitting there with his child and another person they sarcastically said: “Nice to see you in Miami”,’ one eyewitness told DailyMail.com. ‘He said: “Thank you.”‘

But when the hotel guest went on to ask about his lack of face covering and if he was vaccinated, Swalwell was left ‘speechless,’ according to the source.

Swalwell, like many fellow Democrats, has been a huge proponent of mask and vaccine mandates throughout the pandemic and has openly criticized his Republican counterparts for failing to enforce such measures.
Source: Daily Mail

This isn’t the first time that Swalwell has been embarrassed in public. The worst was his pathetic attempt to become the Presidential nominee for the Democrats in 2020, and then there was the infamous “Fartgate” incident of 2019.

#FartGate: Someone Let A Massive One Rip On Live TV — Was It Eric Swalwell Or Chris Matthews?

Let’s not forget that the awkward Congressman with the likeability of pre-chewed gum who sits on the House Intelligence Committee, as well as the House Homeland Security Committee, and the Subcommittee on Intelligence and Counterterrorism, was rather tight-lipped on the nature of his relationship with a Chinese spy named Fang Fang.

If getting duped by a Chinese honeypot wasn’t embarrassing enough, the Congressman has a Twitter account that he either handles himself or has compassionately hired someone with a traumatic brain injury to manage. Actually, someone with a brain injury would handle the account better. It’s clearly just Swalwell tweeting.

Just days into the “15 Days To Slow The Spread” he took to Twitter-dot-com to rage at Florida’s Governor Ron DeSantis over the spread of an airborne respiratory virus before we knew much about it and how it spread. 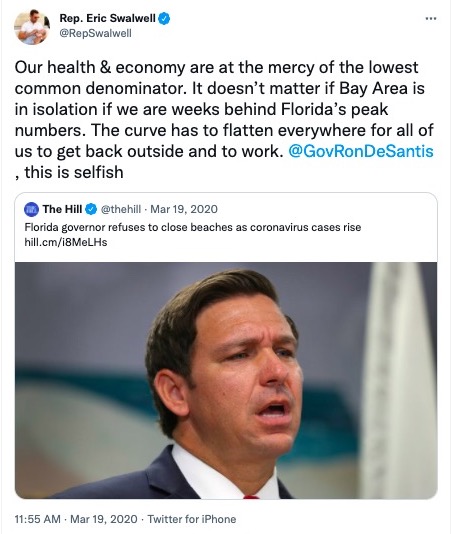 Since then, he’s been very busy ranting about the way that Republicans and the unvaccinated are ruining the lives of Americans who did what they were told by the Corporate Media and followed all of the government mandates.

He also fearmongers that children will die because of the actions of the unvaccinated and members of the GOP. 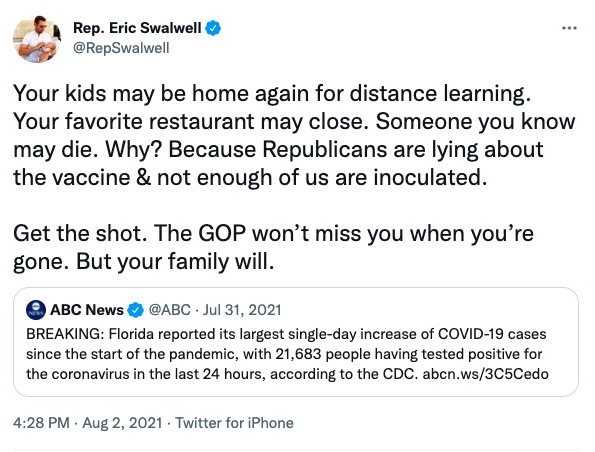 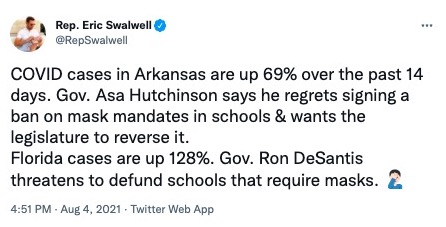 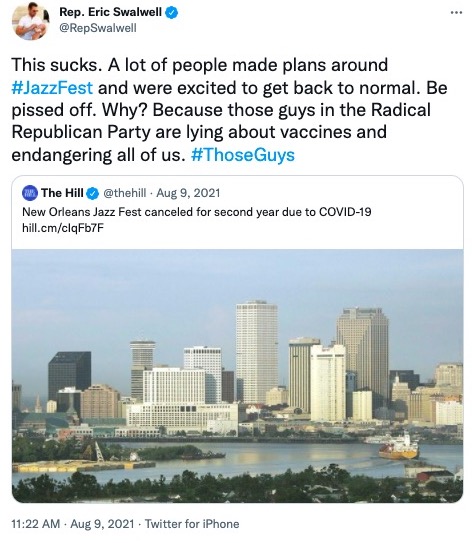 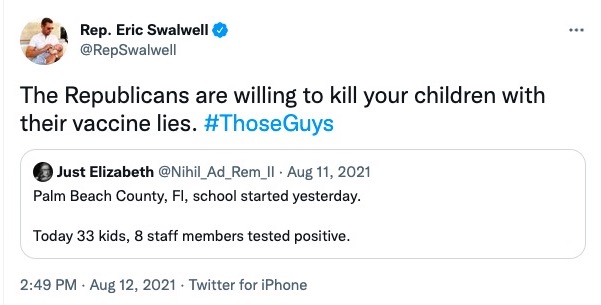 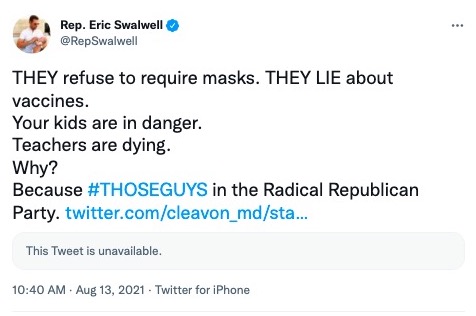 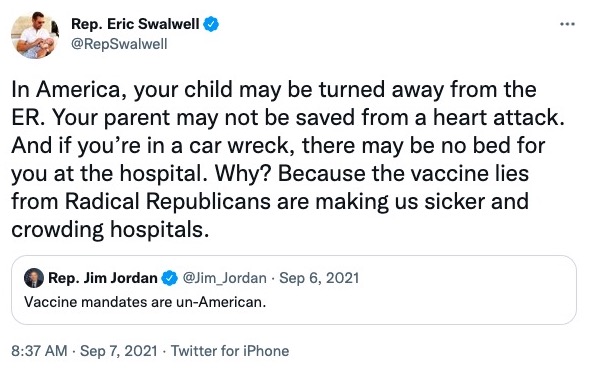 In December he said that it’s “batty” that the unvaccinated are “allowed to fly.”

This wanna-be authoritarian is clearly not playing with a full deck.

But while he’s ranting about the Republicans and the filthy, virus-spreading unvaccinated that are making the vaccines not work and want to kill the children of the triple-jabbed, he took some time to take a photo sans mask with a couple of those Texas Democrats who fled from their state to avoid doing their job and brought the Delta Variant to D.C. on their mini-vacation. 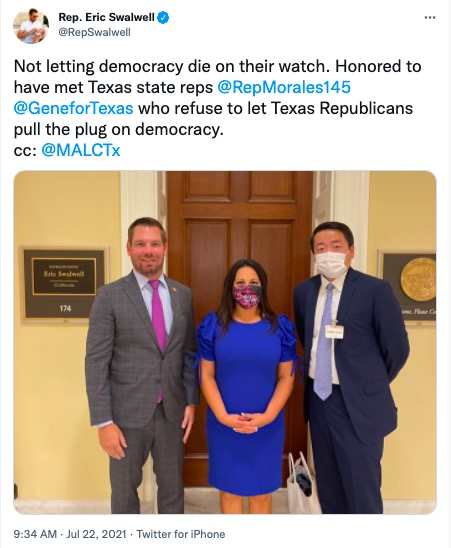 Swalwell responded to the Daily Mail photos by defending himself saying that he was drinking coffee at the time.

Funny they didn’t use this picture in their headline, taking a cup of coffee to my mouth. And thanks @DailyMail for not blurring out Hank’s face. He’s too damn cute! pic.twitter.com/y617ATH2u8

That excuse sort of falls flat when you remember that the Governor of Swalwell’s home state had said in late 2020 to eat Thanksgiving dinner outside and mask up between bites.

Christina Pushaw, spokesperson for Governor Ron DeSantis gave some perspective and addressed criticisms from the “BlueAnons” suggesting that Swalwell was outdoors like AOC was.

Sorry BlueAnons, maskless Eric Swalwell, his maskless friend, and his maskless infant are NOT sitting outdoors. They are pictured in the lobby of Loews Hotel near Bar Collins. Indoors. Here is a photo from another angle. Check out the chairs. Very recognizable if you’ve been. pic.twitter.com/fgX946ThMY

Let’s be clear — this isn’t about whether or not Swalwell should go on vacation or wear a mask when he’s sitting down at a table whether it’s indoors or out.

This is about the Democrat politicians who have consistently shown throughout the pandemic that they’ll impose rules on you that they won’t follow. We have seen it over and over again.

But the second that an opportunity arises for them to travel for vacation — they’re choosing the free state of Florida.

It’s the “rules for thee, but not for me” that is so appalling here.

You’d think that since “DeathSantis” is killing people in his state the Democrats who have been so vocal criticizing him would stay away… or maybe these Dem hypocrites are only criticizing the Florida governor because he has an “R” after his name and dunking him for rising cases in the fourth-largest state is a convenient political move.