Last June, Abbott looked like a juggernaut. He’s got so much money behind him such an entrenched machine built up, what could possibly stop him? The short answer is — accountability to his own base.

He’s had plenty of opportunities to step up and demonstrate his leadership skills and throw his support behind GOP priorities.

But when it really mattered, those leadership skills were nowhere to be found.

The True Texas Project laid out the case for why his failures to back Republican priorities are reason to replace him with a Republican nominee who makes them a priority.

They wrote a fairly lengthy ‘anybody but Abbot’ article enumerating many of his failures to execute and deliver both as Governor, and before that as AG.

Simply put, his priorities and the priorities of his base don’t match up… and the base is demanding someone who will truly represent them.

Here’s a list from that article showing which of the 9 priorities he has actually delivered on to their satisfaction. 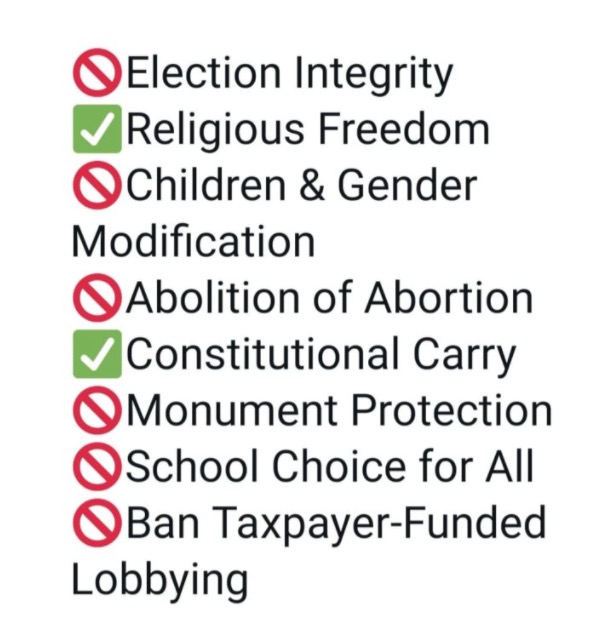 Two out of Nine is not a great grade. And the election integrity issue? We now have weaker penalties for election fraud than we started with.

They may be happy to force a runoff and pick ANY primary contender NOT named ‘Abbott’. That’s all well and good, but it’s one thing to identify a problem, and quite another to offer a solution.

What good is ousting one lousy candidate only to replace him with someone who isn’t much better?

Rather than potentially splitting your vote in the primaries and risk Abbott winning outright while better candidates jockey fo second place, wouldn’t picking the best candidate and rallying support around him make more sense?

Seems like it would be the smart play here, doesn’t it?

For our money? We like the proven leadership of Allen West, who you can find on his web page, West4Texas.