You probably won’t be shocked to learn that the account wasn’t permanently banned for posting the video.

It’s been two years since Quds Forces leader and fomenter of terrorism, Qasem Soleimani, was left as a chunky smear on the Baghdad tarmac, and it looks like the leadership in Iran are still in mourning.

Around the second anniversary of Soleimani going ka-boom, a Twitter account linked to Ayatollah Khamenei posted a CGI video called “Revenge Is Definite” which shows Trump and several men — including former Secretary of State Mike Pompeo — golfing at Mar-a-Lago and what the Iranians imagine a drone strike on Trump and Pompeo would look like.

Twitter permanently suspended an account linked to Iran’s supreme leader Ayatollah Ali Khamenei on Saturday after posting a video three days before depicting an animated drone strike against Donald Trump as revenge for the assassination of a highly-regarded general.

The Iranians seem to have acknowledged Pompeo’s pretty amazing weight loss, which was kind of a nice touch.

But the thing is, the video isn’t the primary reason that the permanent ban from Twitter was issued — it was because that account was an attempt at circumventing a previous ban that violated the platform’s rules.

…Twitter has since blocked the @KhameneiSite for safety and security purposes.

The social media giant says it has clear policies around abusive behavior and will take action when violations are identified.

‘Twitter says @Khamenei_Site was banned in 2021 for creating fake accounts, among other things,’ BBC journalist Kian Sharifi said on the platform on Saturday.

‘However, tweets by that account were frequently retweeted by Khamenei’s main accounts.

‘None of the Iranian Supreme Leader’s accounts are verified by Twitter.’
Source: Daily Mail

Of course. President Trump was permanently banned from Twitter because of the “horrific events” on January 6, 2021, that they attribute to the “interpretation” of two of his tweets on January 8. According to Twitter, the offensive tweets were, “The 75,000,000 great American Patriots who voted for me, AMERICA FIRST, and MAKE AMERICA GREAT AGAIN, will have a GIANT VOICE long into the future. They will not be disrespected or treated unfairly in any way, shape or form!!!” as well as “To all of those who have asked, I will not be going to the Inauguration on January 20th.” Taken together and with the “broader context of events”, says Twitter, the tweets violated the site’s “Glorification of Violence Policy.”

To sum up — @RealDonaldTrump was banned for two anodyne tweets that allegedly “glorified violence” but the @KhameiniSite was banned for creating fake accounts and not primarily for the CGI assassination video of a former President and his Secretary of State titled, “Revenge is Definite” posted by a hostile terrorist-exporting regime.

You just can’t make this up.

To be slightly fair to Twitter, (though they really don’t deserve it,) the video was removed before the account was suspended.

Let’s not forget what the Quds Force is — a branch of Iran’s Islamic Revolutionary Guard Corps that’s part spy agency (think CIA) and part military special ops (think JSOC) that specializes in “unconventional warfare.” The Quds Force was central to the creation of Hezbollah and they continue to work with other terror organizations. But its main goal is to “liberate Muslim land” from “occupiers.” Guess what land they’re referring to? Here’s a hint: “Quds” in Persian is translated as “Jerusalem” in English. Yes, they want to take over the land of Israel.  You can tell how important that is when in the short video, they made sure to include an image of the Dome of the Rock in Jerusalem as a photo on the console of the drone commander.

Honestly, there’s just so much going on with that video.

First and foremost — notice that they’re going after Trump and not the current President. That’s because they probably don’t see Joe as a threat at all — after the JCPOA and the pallets of cash from the Obama administration, why would they?

The rest is obvious — it’s not based in reality, it’s also pretty cheesy, and it looks like something a budding CGI artist would put up on YouTube.

BBC journo Kian Sharifi had some fun mocking it noting that the drone commander had a gaming website open while he was ordering the drone strike.

The website of Iran’s SL Khamenei has chosen this animation as the best entry in a competition to mark the second anniversary of Soleimani’s killing.

Published on https://t.co/UHGRnoPEAR, the video shows Trump being targeted by a robot and a drone while playing golf in Florida. pic.twitter.com/K6vb0WEKi1

So much going on here but my favourite part is that the operator in the control room guiding the robot has Steam open. Took a break from gaming to send a robot through shrubbery & grass on a golf course in Palm Beach. I can also see Audacity open there. What audio is he editing? pic.twitter.com/DxD2cEMPxu

The account was set up in June 2021 as an apparent replacement for @Khamenei_Site, which was banned in January 2021. At the time of its suspension, @KhameneiSite was followed by Khamenei’s main Persian and English accounts.https://t.co/4gw9XXmYVt

It’s pretty clear that Iran is still pretty riled up about the killing of Soleimani, but then, we could see that from their near-worship of the guy after he died. 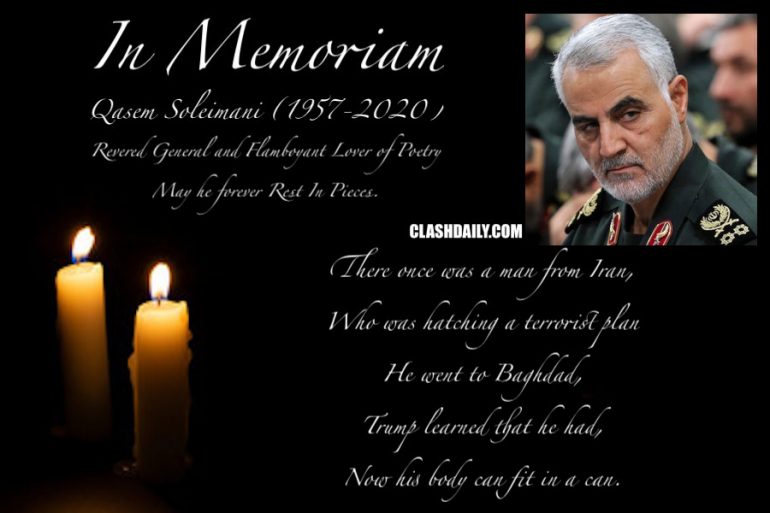 Since Soleimani’s death, Iranian leaders have commemorated the event with poorly-made fever-dream videos of revenge against former President Donald J. Trump, America in general, and their favorite target, Israel.

Just days after his death in 2020, the Islamic Revolutionary Guard Corps (IRGC) released a video showing how they’d go in and kill Trump in the White House and then destroy the Capitol Building. The short video was supposed to make the Leader of the Free World quake in fear, but it sort of fell flat. Perhaps it was the decision to make the video look like a 1980s home movie filmed by Uncle Joe after downing a 6-pack, but it’s hard to tell.

In 2021, perhaps because of the pandemic, it was more of a memorial with a jaunty little tune sung in Farsi, Hebrew, and Arabic sung by Solemeini look-alikes. It was called “The Promise of the Hero” and included the lyrics “Death to America” and “Death to Israel” along with vows of vengeance and promises to “blow up the den of Satan.”

Also in 2021, Hezbollah put up statues and posters as memorials to Soleimani in Lebanon — including a really bizarre one in Arabsalim, Lebanon, that depicts the moment that the U.S. MQ-9 Reaper drone hit Soleimani’s vehicle. 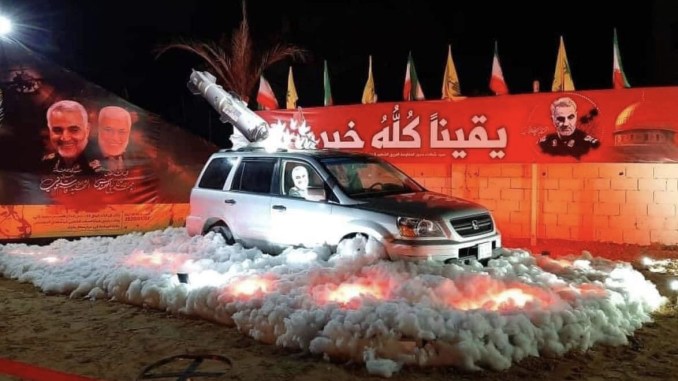 These are truly charming individuals and not members of some deranged death cult.

Remember, the Biden-Harris administration is currently in negotiations to resurrect the awful Iran Nuclear Deal — only worse. In a deal that’s being described as “less for more”, Tehran will give up few nuclear concessions but keep most of its important nuclear advancements that they gained through violating the old deal as they continue on their merry way to becoming a nuclear power.

All while the leadership openly posts videos wishing the death of former prominent U.S. officials.