We’ve gone from taking prayer out of public schools to allowing the Satanic Temple to host clubs for elementary school students in public school buildings.

To some people, this is considered “progress” and “equality” not blatantly promoting Satanism.

Tell me again how we’re not living in some sort of dystopian nightmare.

Some parents at Jane Addams Elementary School in Moline, Illinois were stunned when they saw a flyer with a permission slip for an “After School Satan Club” targeted at First through Fifth Graders.

The flyer has a cartoon image of a smiling Satan and addresses students in large, friendly letters: “Hey Kids, let’s have fun at After School Satan Club!”

It also has a message for parents telling them that children will learn, “Benevolence & empathy”, “Critical thinking”, “Creative expression”, and “Personal sovereignty.”

The flyer also attempts to reassure students that the Satanic Temple “views Satan as a mythical figure representing individual freedom” and that the club “will not attempt to convert children to any religious ideology.”

The club runs once a month from January through May. 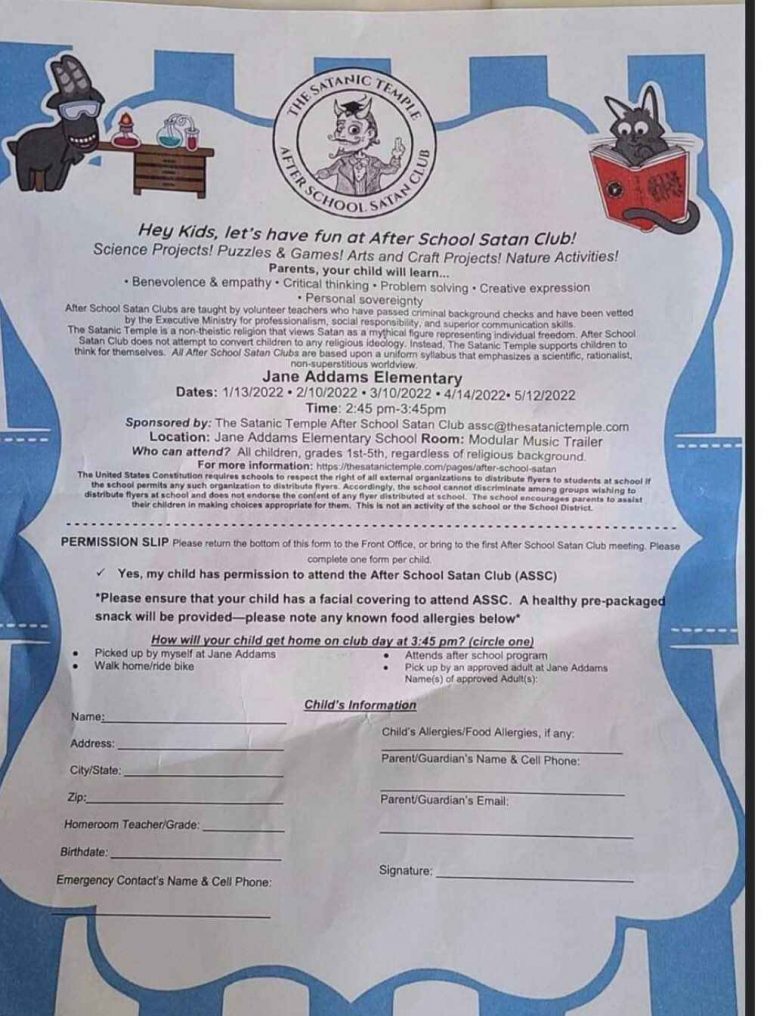 According to a statement issued by the Moline-Coal Valley School District, the reason that they allowed the After School Satan Club is because they have allowed other religious groups to rent facilities outside school hours and the district “does not discriminate against any groups who wish to rent our facilities” citing Christian groups that do just that.

KWQC posted the full statement which seems to have been removed from the district’s website.

The Moline-Coal Valley School District understands that there is concern and confusion over an upcoming after-school club at Jane Addams elementary.

The District would like to provide information on the situation. The Moline-Coal Valley School District and Board of Education have policies and administrative procedures in place which allow for community use of its publicly funded facilities outside the school day.

The district has, in the past, approved these types of groups, one example being the Good News Club, which is an after-school child evangelism fellowship group. Flyers and promotional materials for these types of groups are approved for lobby posting or display only, and not for mass distribution.

Students or parents are then able to pick up the flyer from the lobby, if they so choose, which is aligned to District policy. Please note that the district must provide equal access to all groups and that students need parental permission to attend any after-school event. Our focus remains on student safety and student achievement.
Source: KWQC

This argument that Satanic Temple worshippers don’t actually worship Satan is an interesting tactic. What exactly makes them a religion, then? It seems to be a group of anti-Christian leftist zealots that want to undermine religious liberty by making a mockery of it. But we knew that already.

At least the members of the Satanic Temple are being honest that they view the sacrifice of unborn children on the altar of self as a religious practice in a way that other pro-abortion leftists don’t.

The question of what makes the Satanic Temple a “church” if the group is “nontheistic” and argues that “religion can be ‘divorced’ from superstition.” Perhaps that’s a question for the IRS to answer since they were the federal agency that designated the Satanic Temple as a church and granted it tax-exempt status. (That reminder was just in case you didn’t hate the IRS enough.)

The Satanic Temple insists that it’s all about getting kids to “think for themselves.”

What does allowing children to “think for themselves” from a group that views all religious beliefs as simply “superstition”?

Probably overt defiance and rejection of God which would be consistent with the rebellion of the “mythical figure” that they have cartoonified on the flyer.

And the Moline-Coal School District is fine with that because they’re paying for use of the space.

If you think that this is just in Illinois, you’re mistaken.

KWQC conducted an investigation and found that this is something that is apparently happening all over the country.

The Satanic Temple deliberately looks for places that have religious after school programs and offers theirs as an alternative.

TV6 Investigates spoke with its organizers and found it is a nationwide club, founded by members of the Satanic Temple, who offer it to schools that have after school clubs offered by religious organizations such as the Child Evangelism Fellowship.

The After School Satan Club is intended to act as an alternative offer to religious after school programs, especially to kids who may not be able to go home straight after school.

“If you’re going to open the public forum up to one religion, you open it up to all of them,” said Lucien Greaves, Co-Founder of the Satanic Temple.

Do you really need any more reasons to get your kids out of public schools?

It’s time to bring out the big guns when we’re praying for our kids and our public schools.

Here’s something that can really help.