Remember those simpler times when the big story to capture our imagination was a billionaire’s prison suicide and not a global pandemic? Well, they’re ba-ack!

Just one week after Prince Andrew settled with his accuser over creepy Jeffrey Epstein sex allegations, we have another guy from that inner circle dying in a prison suicide under mysterious circumstances very similiar to the suicide (?) of Jeffrey Epstein.

If you believe official accounts, Jean-Luc Brunel is now the second man in this photo to have committed suicide in prison. 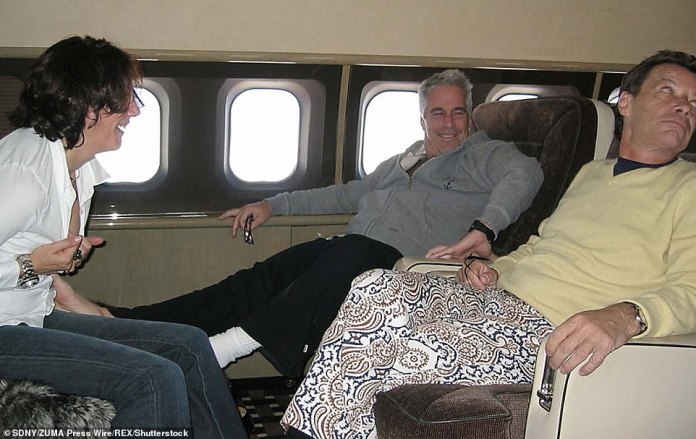 Who was Jean-Luc Brunel?

As the photo would suggest, he was a friend of Epstein’s. But he was more than that. He was the French modeling agent who, it is claimed, procured more than 1000 young female victims to feed Epstein’s monstrous sexual appetites.

He, too, was being held and facing charges of raping underage girls.

Why was he arrested now?

The same woman who accused Prince Andrew of rape and later settled with him brought allegations against Brunel as well, claiming to have been raped by him FEWER than 20 years earlier. This made her the first accuser to come forward WITHIN France’s 20-year statute of limitations.

Until then, police knew exactly what kind of person he was, but couldn’t lay a finger on him.

Giuffre brought forward considerable evidence against him, and French authorities caught him trying to take a one-way trip to a city in Africa.

The ‘multiple rapes’ of Giuffre – now a mother of three who was called Virginia Roberts before her marriage – were said to have mainly taken place at Epstein’s home on the private island of Little Saint James, in the U.S. Virgin Islands.

Giuffre had produced sworn testimonies saying that both Brunel and Prince Andrew attacked her there.

According to French law, a French citizen such as Brunel can be tried in France for offences committed abroad.

Both Prince Andrew and Brunel vehemently denied these claims, with the Prince considered a key witness who both the Americans and the French wanted to interview in person. — DailyMail

What were the circumstances of his death?

This is where things get sketchy.

His death in an alleged hanging will fuel conspiracy theories around the Epstein affair after he also died in prison while awaiting trial in what authorities say was a hanging.

However video cameras were not running at the time he died in the cell he shared with another inmate.

Prosecutors in Paris confirmed Brunel was found hanging in his cell in La Santé, in the south of the capital city, in the early hours of Saturday morning. It is not known whether Brunel was sharing a cell or whether there was any CCTV footage inside.

‘A night patrol found his lifeless body at about 1am,’ said an investigating source. ‘A judicial enquiry has been launched, and early evidence points to suicide.’ — DailyMail

Those are some interesting parallels to Epstein’s circumstances. There are too many complexities in the Epstein story to enumerate them all, but if you want to refresh your memory, you can peruse some of ClashDaily’s earlier reporting on the topic here.

A lifeless body found hanged in his prison cell? Cameras turned off?

In this case, the dead man had a cellmate who … did nothing to stop it?

We know from bitter experience that there was never anything more than a slap on the wrist given after the investigations into Epstein’s mysterious ‘suicide’… not even on the guards who were, we are told, asleep at their posts and who falsified the hourly wellness checks.

Did this man actually commit suicide rather than face the public humiliation of having his past exposed? It’s one possible explanation. Could powerful figures with a lot to lose be tying up loose ends? That’s another one.

We couldn’t help but notice that even in the Maxwell case, we didn’t see the publication of any lists of the wealthy and privileged men who had attended these parties or assaulted these young women.

We see ‘news media’ outing people for throwing $20 into the pot for the legal defense of Kyle Rittenhouse or the Canadian Freedom Convoy… but strangely, these names remain hidden.

Is there an innocent explanation? Perhaps.

But then, what explains the news media spiking stories they had about Epstein or Harvey Weinstein until well after their power and influence had waned, or they had been otherwise ‘outed’?

The thing powerful people tend to forget is that fortunes can be reversed in a helluva hurry.