If you tune into Ottawa’s local media, you would think Trudeau is putting on a master class of how to successfully bring an end to a dangerous and illegal occupation.

Of course they would, these same news outlets happen to be recipients of federal government largesse and are unlikely to bite the hand that feeds them.

Here’s Trudeau bragging about how well he is ‘respecting’ the Charter Rights of Canadians, even as he breaks them. Keep in mind that today (Friday) was supposed to be the day that the Canadian parliament debated the validity of the Emergency Order on which this crackdown was predicated. But because of the police action going down as a direct result of this Emergency Order, today’s session did not sit… meaning Trudeau’s crackdown — the one that suspended Canadian’s Charter Rights based on tenuous legal claims — was able to proceed unchecked. 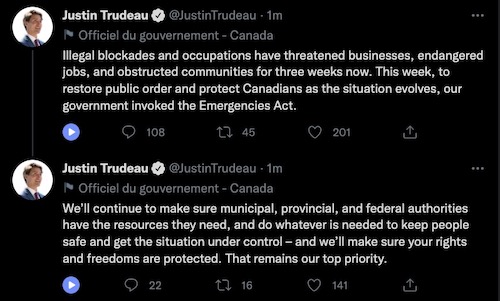 How characteristically authoritarian of him.

Meanwhile, in the real world, what did the watching world see unfolding in the shadow of Canada’s Peace Tower?

For one thing, there were snipers on rooftops.

There are snipers on the roof of the Senate and one of the Rideau Centre buildings in Ottawa right now at the Freedom Convoy protest. pic.twitter.com/Ly5QqkLDWU

And cops armed with rifles — not something Canadian civilians are used to seeing in the hands of local law enforcement.

Guns and snipers for a peaceful protest?

There were conflicting reports about what, exactly was happening in the crackdown, whether or not they were going to be deploying sonic weapons or tear gas.

In the several blocks where the protesters had gathered, we saw a very different atmosphere directly in front of the parliament buildings than we did where the conflict occurred just East of the War Memorial. By the Hill, the crowd was still jovial with a tailgater atmosphere. A couple of blocks East was a different story.

The police started moving their line forward… and then they started using horses. That was a bad idea. Here is a woman being trampled by horses.

She may not have been the only one.

As for the elderly woman, we are still trying to confirm her well-being. Reports range from really ominous… 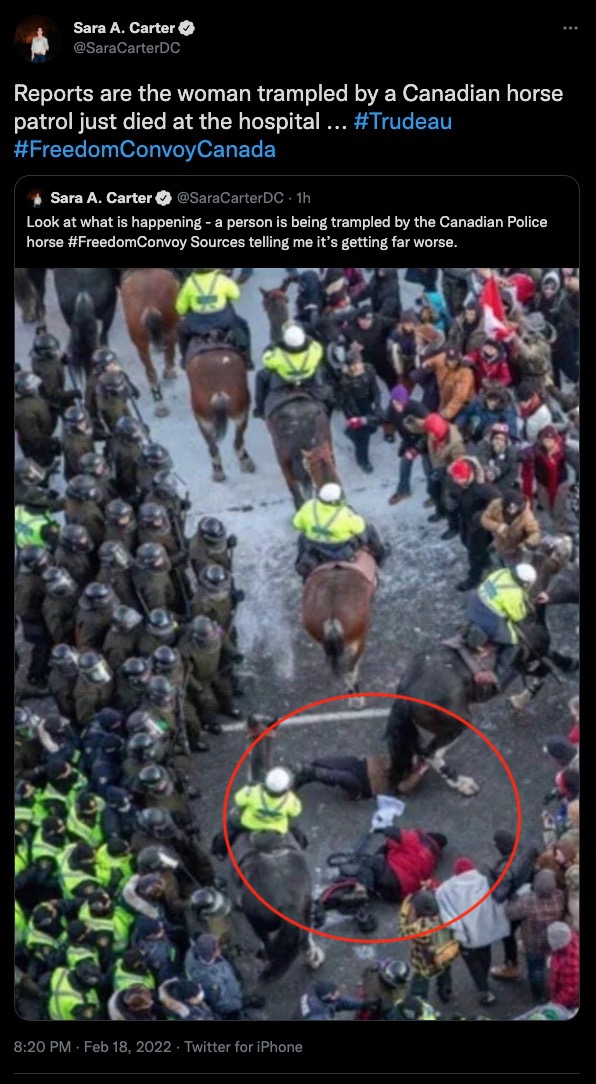 I've been making calls trying to confirm a report circulating that the woman trampled by a police horse had died. Someone sent this to me. I'm still working to independently verify this, but I hope and pray that this accurate and the woman is okay. pic.twitter.com/B3qaT7YQKD

If an elderly native lady got hurt in police action, that will be really hard for Woke Trudeau to talk his way out of the hole he’s dug himself.

As you might expect from what we’ve seen so far, batons were brought out against Canadians as they sing the national anthem.

Police in Ottawa break out the batons after freedom protestors sing O Canada.

And what could be worse than any of this? Well, if there is any truth to the claim that this guy had a heart attack…

Someone appears to have suffered a heart attack just moments ago in Ottawa. Watch @lincolnmjay livestream for on the ground live reporting. https://t.co/G8F2AHFyRq pic.twitter.com/YZZEP8ImX7

And they used the occasion of his falling to move the line forward, that would certainly count as worse.