There has been a lot of big chest-thumping about the super-tough sanctions that Biden was threatening Putin with. If they’re so tough and effective, why haven’t they been, well, effective?

We can’t help but notice that Russia is the #3 supplier of American energy… a problem we would not have had if Biden hadn’t taken a scorched earth approach to the American energy sector.

It’s tough to threaten the hand that feeds you, and Putin knows that radical environmental activists have been very successful in pushing first Europe and now America into a position of supine dependence on foreign energy suppliers.

Trump saw it coming and spoke up about it.

I know CNN & MSNBC never aired this, so I figured I would. Spot on, don't you think? pic.twitter.com/6V1vRKxP8p

This is a national security risk that Biden did not take at all seriously.

So when sanctions against Russia do not include any reference to Russian energy, questions are raised about how serious the sanctions themselves are, too.

The Biden administration confirmed one asset which will not be targeted in the president's new sanctions – Russian oil. @Logan_Ratick reports. https://t.co/TxCU0AW3aD pic.twitter.com/6LVYNToSpY

That means Putin’s war machine will keep being funded… by European and American energy consumption.

But that’s not all. China has chosen sides and is more than willing to support Putin’s war effort.

When Biden turned to China looking for Chinese influence to help avert war in Ukraine and shared Russian troop movement details with them, China turned around and passed that information to Putin.

Biden’s being played for a fool.

And China has their back financially, too. 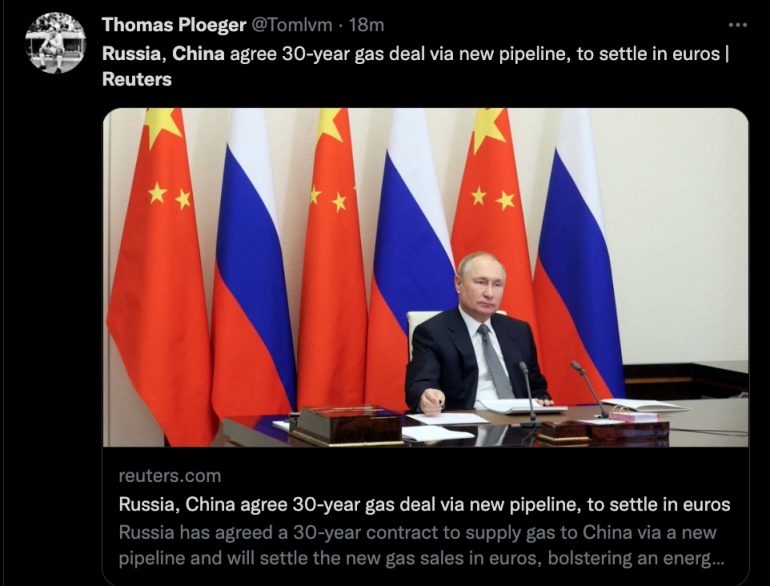 Imports had been restricted in recent months over concern over Russia’s measures to prevent plant diseases, particularly in agricultural crops.

The move to keep the market open was reportedly part of a deal between Moscow and Beijing concluded earlier this month and is the latest sign of growing ties between the two states.

Russia, the world’s largest exporter of wheat, exported more than 30 million tonnes of the product from January through November last year.

The same year, Moscow sent 9.8 per cent of its total agricultural exports, including cereals, fishery products, meat and dairy to China.

It comes after experts predicted yesterday that China could buy more Russian energy and lend Moscow cash to help Putin weather sanctions imposed over his invasion of Ukraine. —DailyMail

There is exactly one card in his hand that Biden can play that will make a difference. Not that he’ll ever willingly play it.

Unleash the titanic energy production of America, drive down the price of energy and slash Putin’s profits.

Better yet, give European energy consumers an ethical energy source to choose from. But Biden will probably be more interested in Kerry.