They also don’t seem to be a “small fringe” and… not very white. 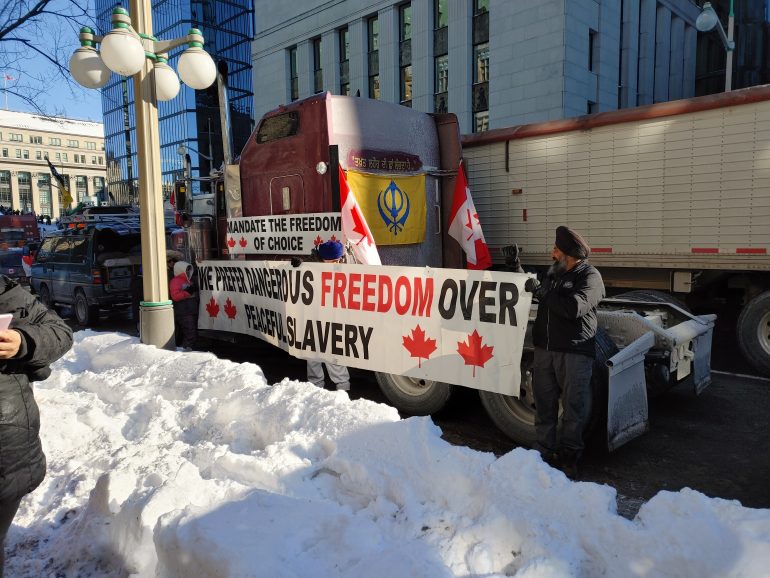 “We are your white fringe minority!” say two Indian freedom protestors in a message to Justin Trudeau! pic.twitter.com/BLv58gkxAw

They come from all over the country — even the province of Quebec that has a strong faction that wants to separate from Canada — but they wave the Maple Leaf just the same.

This was just too much for the sleepy town of Ottawa, so on Friday, it was announced that they’d hired a crisis management firm to help deal end the protest.

It’s important to note that no politicians at the federal, provincial, or city levels have met with the organizers. A few Conservative and People’s Party of Canada politicians met with the protesters, but they don’t wield the power in Ottawa.

Instead of speaking with the leaders of the convoy, the city has decided to use the police to end the protest.

On Saturday, during a meeting of the Police Services Board, Ottawa Police Chief Peter Sloly said that the GoFundMe campaign funding the Freedom Convy was taken down at the behest of the Mayor and other Ottawa politicians. He said that they were going to cut off supplies to the truckers.

On Sunday, Ottawa’s Mayor Jim Watson declared a state of emergency over the peaceful protest.

Today, February 6, Mayor Jim Watson has declared a state of emergency for the City of Ottawa due to the ongoing demonstrations.
For more information, visit: https://t.co/1ga2tHegDd pic.twitter.com/UO3hdSnQeq

And the crackdown has begun. Police are everywhere. Fuel has been confiscated from the truckers’ staging area, and people are being prevented from bringing in more fuel to them.

I just called the Ottawa police media relations and they said they aren't aware of this tweet and would not provide me with a law that could lead to an arrest on these grounds.

The police personnel then hung up the phone. https://t.co/QQs6RVOwDt

Take a good look at these cops paid from your money, in riot gear doing a round in a place where there is no riot. They liked the atmosphere in Ottawa so they decided to join the party. Too bad they are giving hundreds of tickets. What do you think we should do about this? pic.twitter.com/27EybLTLns

Section 8 of the Charter of Rights reads “Everyone has the right to be secure against unreasonable search or seizure.” Without a search warrant, this is just theft. Governments are used to violating our privacy now, aren’t they? And the media love it. pic.twitter.com/UOYAK6OoF8

The Prime Minister of Canada and the heavily-government subsidized media are desperately trying to make the truckers and anyone that supports them into the villains.

As a reminder, over the past two years, the Canadian government under Trudeau has:

But according to Trudeau, the truckers are the fascists infringing on Canadians’ rights.

Meanwhile, according to Ottawa Police data, crime has gone down since the convoy arrived — no riots, injuries, or deaths have been reported in connection to the protest.

“We are here out of love for our families, our communities and our nation,” blockade organizer Tamara Lich of Calgary told reporters. Lich said protests opposed to vaccine mandates were “average, peace-loving and law-abiding citizens from all walks of life” and disputed claims the blockade was lawless.

“No one from the federal, provincial or municipal government has spoken directly with us,” said Lich. “Instead they are using you, the media, to portray us as racists, misogynists and even terrorists.”

As we noted in this post, there have only been 3 arrests in over a week of protest. At least two of those were locals and it’s unclear if the third was also from the region. One man was arrested for mischief, another for carrying a weapon, and the third for uttering threats. Very Canadian charges.

So, if they’re not beheading statues, smashing Starbucks windows, and beating people in the head with bike locks, what the heck are these truckers doing?

Settling in for a long protest until all COVID mandates are lifted.

To the consternation of the federal government and local law enforcement, this is a protest of people who have what we’ll call “marketable skills” — they know how to do things.

Update from the shack. Folks down here say authorities told them they can’t have a permanent structure.

Lots of cookies, chips (sour cream and onion, no name) and a good amount of coffee, tea and hot chocolate.

Protest fuel of a different kind attached to a shelf in the food hold. pic.twitter.com/PEdF5xuzVs

They’re also having a whole lot of fun out there after two years of lockdowns, rules, and mandates.

Supporters of the Freedom Convoy hold hands and sing “We Are the World” outside Parliament Hill in Ottawa.

A little kid gave a Freedom Convoy trucker a picture he coloured and was then invited to honk the truck’s horn.

They’re playing street hockey right in front of the Supreme Court building and they begin with the anthem, of course:

Supporters of the Freedom Convoy, including a disabled vet, talk about why they were shoveling snow off the National War Memorial.

Is it even a protest without a conga line? #cdnpoli #antivaxxers #Ottawa pic.twitter.com/VOakhPOjzt

On Friday night, they were setting up bouncy castles for the kids.

Protestors are in the process of setting up multiple bouncy castles at the corner of Bank and Wellington #cdnpoli #ottnews #TruckersConvoy2022 pic.twitter.com/6dsiQL3kqJ

It was a party atmosphere.

Trucks honk along as people dance to YMCA at the Freedom Convoy dance party, which continues to grow.

Nightmare on Rideau. Rave raging. Where y’all at? Turn up yo. #Ottawa pic.twitter.com/jJPYP7zYXO

It’s time for the Macarena as the Freedom Convoy dance party grows.

On Saturday, pancakes and sausages were being cooked.

Pancake batter and sausage links, cooked out in the open.

Here are the kids having fun on the bouncy castles…

This proves how out of touch the mainstream media and @JustinTrudeau is. Kids playing on bouncy castles. Bring in the military. #TruckersConvoy2022 https://t.co/8hpC710hZK pic.twitter.com/LiQWKRAgqb

…and bales of hay.

Family friendly events and bouncey castles being set up in Ottawa for the kids as the Freedom Convoy enters the second week pic.twitter.com/1sscz5Kysp

Saturday was an even bigger party…

Morning prayer in Ottawa at trucker convoy. Best church service I’ve been to in many many years pic.twitter.com/4DIaIu8O6e

And fed the homeless:

Truckers giving food to the homeless in Ottawa pic.twitter.com/cvctJiLvqV

.@JustinTrudeau stated the other day that the truckers protesting in Ottawa were stealing food from the homeless. All I have seen from being here, is the exact opposite. Here are truckers giving away free pizzas to anyone who is hungry. #FreedomConvoy2022 https://t.co/VfgKKYKzKr pic.twitter.com/zoexlgtpAY

They’ve inspired others to do the same.

Two students are giving out food and supplies to anyone who needs it at the Trucker Convoy in Ottawa.

They’re even giving out socks and clothes to keep people warm.

Update from Ottawa and the trucker convoy. It is freezing cold here but people are still here, keeping warm by dancing, playing hockey and warming up by the fire. Lot’s of food, snacks, and warm drinks for anyone to take and enjoy. #truckersforfreedom #freedomconvoy2022 pic.twitter.com/zrRU1NC9yB