It looks like a whole lot of people over at CNN just can’t seem to keep it in their pants.

Now, it appears, CNN’s President, Jeff Zucker, has been getting busy with a work colleague. Zucker didn’t name his paramour, but says that she’s his “closest colleague” and he’s known her for more than 20 years. He added that the relationship “evolved” in recent years and he didn’t disclose the relationship when he should have.

Zucker announced on Wednesday that he was resigning effective immediately.

In the CNN article, Zucker’s lover was outed as Allison Gollust, a publicist that worked with him back when he was at NBC, and then followed him to CNN.

Zucker said in a memo, “As part of the investigation into Chris Cuomo’s tenure at CNN, I was asked about a consensual relationship with my closest colleague, someone I have worked with for more than 20 years. I acknowledged the relationship evolved in recent years. I was required to disclose it when it began but I didn’t. I was wrong. As a result, I am resigning today.”

Zucker did not name his colleague in the memo, but the relationship is with Allison Gollust, the chief marketing officer for CNN. Gollust is remaining at CNN.

In a memo of her own, Gollust said, “Jeff and I have been close friends and professional partners for over 20 years. Recently, our relationship changed during COVID. I regret that we didn’t disclose it at the right time. I’m incredibly proud of my time at CNN and look forward to continuing the great work we do everyday.”
Source: CNN

Stelter, CNN’s “Media Watchdog” tweeted out the news he called “stunning” on Wednesday along with a screenshot of part of a company-wide email that Zucker had sent. 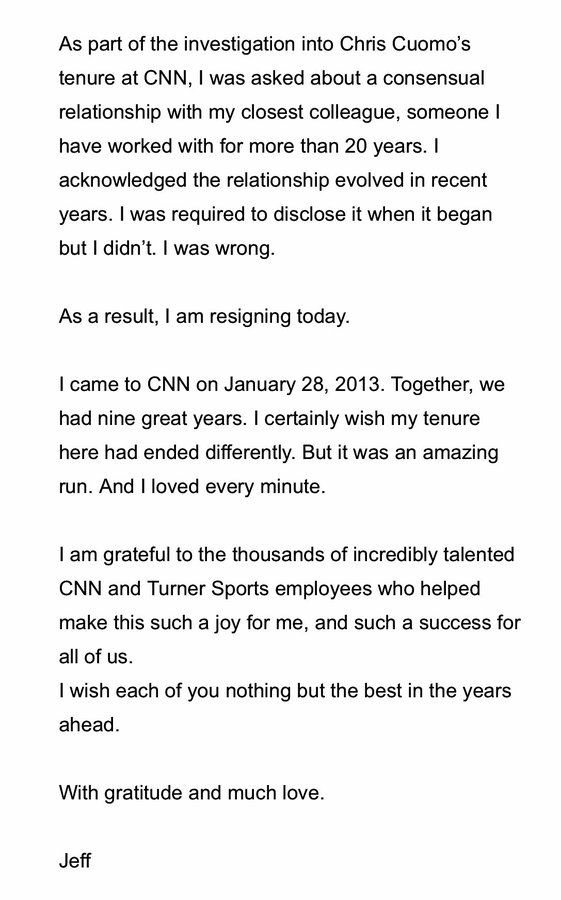 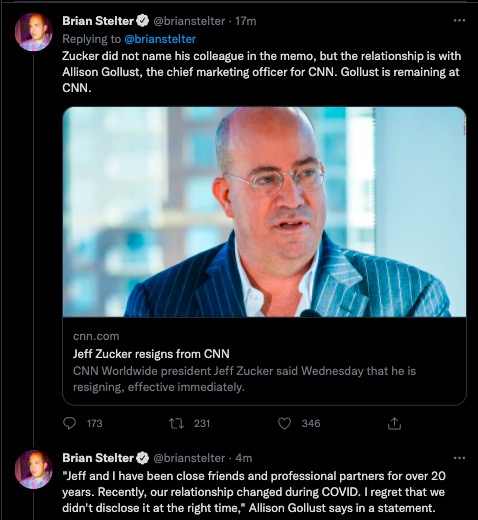 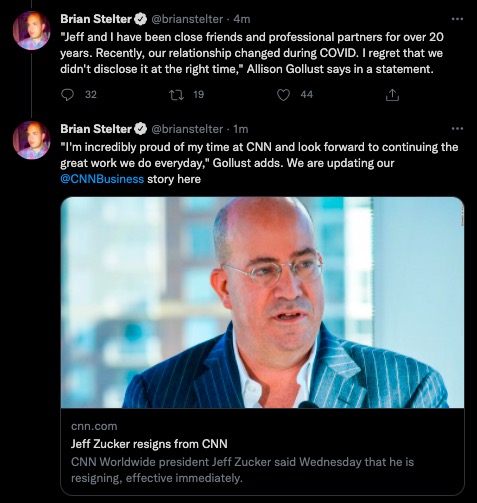 Stelter’s colleague in the ongoing pearl-clutching over the coverage at Fox News was also expressing his shock.

Staffers inside CNN are in absolute shock right now. Employees at the company learned of Zucker’s sudden departure all at once via a company-wide email that went out just after 11am. https://t.co/yv8nH0r2Qj

This shouldn’t be stunning. It’s probably just an easy out for a guy who was already on thin ice. Zucker took over leadership of the network in 2013, and although h managed to navigate some rough waters, the network has been losing viewership and his attempt at promoting CNN’s morning show has fallen flat.

Fox News reported in December that Zucker was the “captain of a sinking ship” as the embarrassing headlines about the network’s staff continued to mount.

Of course, conservatives “pounced” on the news.

So how is it that Jeff Zucker can leverage his position and power to protect sex predators and engage in wildly inappropriate conduct for years, and CNN is allowed to air while Joe Rogan has one doctor on and the left wants him cancelled?

Zucker’s sexual misconduct explains why Chris Cuomo was able to hang on as long as he did, Jeffrey Toobin was allowed to come back, and why they had not 1 but 2 pedophiles (that we know of) on the payroll.

But it turns out that Allison Gollust wasn’t just any old co-worker, this was a former communications director for the disgraced Andrew Cuomo.

But it wasn't just any co-worker: It was Andrew Cuomo's former comms director!

Weird how everything seems connected, isn’t it?

Even more bizarre, this relationship was apparently an open secret for years.
Back in 2017, Page Six reported that Zucker and Gollust were spotted at a swanky media mixer arguing. One exec that saw them laughed, “It looked like she was reprimanding her husband or something.”

These excerpts on Jeff Zucker and his mistress from Katie Couric's book last year ???? pic.twitter.com/6wntd52IIA

In Katie Couric’s memoir, “Going There”, which was released last year, she wrote about the “strange” relationship between Zucker and Gollust who were “joined at the hip.”

She noted that Zucker and Gollust not only worked together but their families lived a floor away from each other in the same apartment building while they were both married to their spouses.

Things got even weirder for Couric as she grew closer to Zucker’s then-wife, Caryn.

“She and her husband and kids had moved into the apartment right above Jeff and Caryn’s — everyone who heard about their cozy arrangement thought it was super strange,” Couric wrote. “By that point, Caryn had become a close friend and it made me really uncomfortable.”
Source: New York Post

That is some weirdly messed-up stuff.

Couric added that Zucker was pressuring her to bring on Gollust as a publicist for the “Today Show” even though the position was already filled.

“At a certain point, Jeff made a huge push to bring on Allison Gollust (at the ‘Today Show’),” wrote Couric. “I had to wonder why Jeff was angling so hard to bring Allison on board.”

Later, Couric says that Zucker asked her to make a call to the head of Time Warner and put in a good word for him at CNN, and promised that there’d be a spot for her there if she wanted it.

Couric made the call but suspects that refusing to bring on Gollust cost her a job at CNN after Zucker was named the President of CNN Worldwide.

“His first hire? Allison Gollust,” Couric said in her memoir. “Oh, and I never did hear from him about that job.”

Still, something is very fishy about this sudden resignation over a relationship that everyone apparently knew about.

New York Magazine has some thoughts…

So how could WarnerMedia, CNN’s parent company, not have known? A source close to Jason Kilar, the outgoing boss at WarnerMedia who accepted Zucker’s resignation, claims he didn’t know the rumors to be true until the Cuomo investigation surfaced them. The source says Kilar had first heard about the relationship when Radar Online put up an item last December, but thought it was just rumor-mongering. (This is why you shouldn’t hire a Silicon Valley person to run a New York media company — they don’t even know the good gossip.) The honchos did not get along: Zucker was infuriated by Kilar scrambling the company’s org chart so that Gollust and other senior CNN staffers would report directly to WarnerMedia. “It’s like Allison and Jeff were on some sort of codependent power trip,” says someone who has known the pair since their NBC days.

Zucker hadn’t been on the network’s morning editorial calls this week, where he closely guided coverage, but that wasn’t necessarily seen as odd — some assumed he was merely preparing for a bigger job to come. Indeed, Zucker was about to be in the catbird seat: Discovery, run by his pal David Zaslav, is in the final stages of merging with WarnerMedia, and Zucker’s continued reign seemed all but assured. “Everyone thinks this is Kilar taking his succession swipe back at Jeff,” says one CNN staffer, adding, “I feel like people didn’t think that this didn’t need to be this way; Jeff said he would stay till the merger, and that’s just around the corner.”
Source: Intelligencer