Seeing how CIA Chief Brennan lied about hacking the Senate Intelligence Committee computers so Obama could know about their investigation into CIA interrogation, this is very on-brand for Dems.

A serious allegation of corruption is being leveled at the Capitol Police (who report to Nancy Pelosi) by Rep. Troy Nehls of Texas. He is claiming that his office has been unlawfully subjected to entry and search.

The beginning of the reasons why he would make such claim can be traced back to the so-called Jan 6 commission. He was one of the members picked by McCarthy to serve on the committee, who was since blocked by Pelosi, making the entire process patently illegitimate under the rules of the House.

Last November, he publicly raised concerns about security failures on January 6, 2021, including the actions or lack of actions in preparing increased security for the Capitol building. The Speaker of the House happens to be largely in charge of such preparations… so why is Pelosi not answering any hard questions? And why is she blocking subpoenas of critical information by the relevant oversight committee?

Now, the capitol police have been entering the offices of elected officials, photographing privileged documents, and basing an investigation on what they found written in those privileged documents. The ‘suspicious’ term was apparently a reference to body armor. 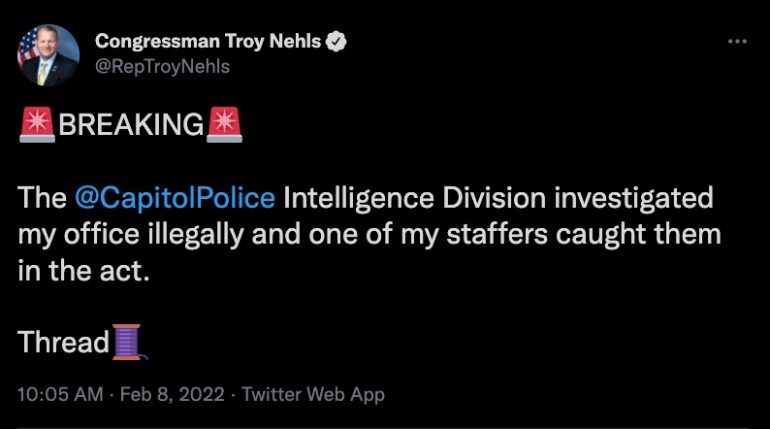 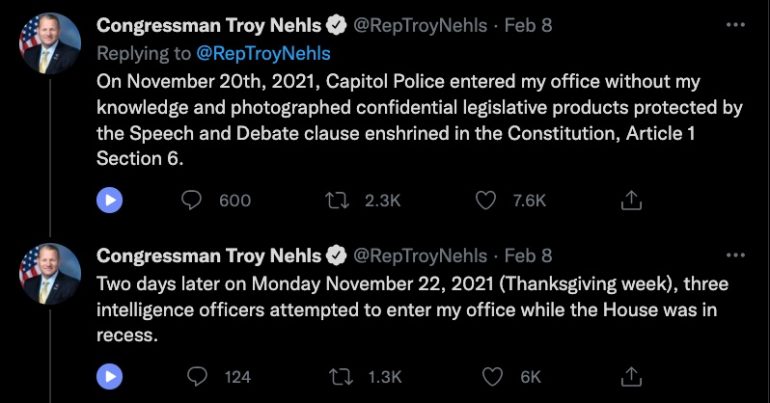 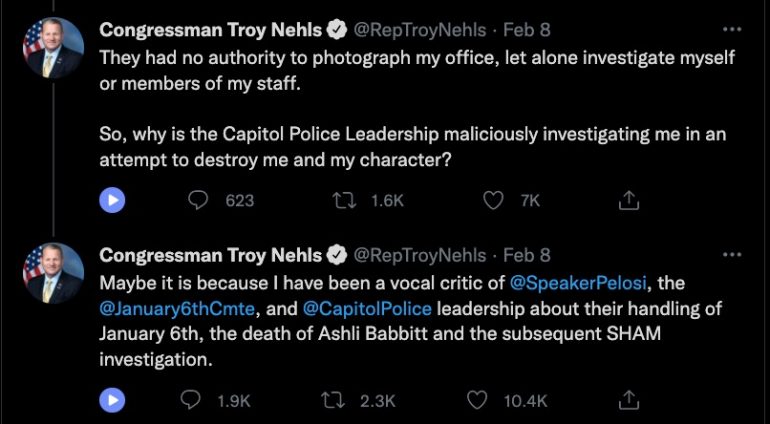 A formal investigation into the matter was opened by the USCP inspector general, he announced.

‘Capitol Police leadership have put a target on my back, but my work in exposing the security failures on January 6th, the death of Ms. Babbitt, and the sham investigation into the events of January 6 will not be deterred,’ he told reporters in a statement.

…Banks told DailyMail.com he was ‘grateful’ the USCP inspector general was stepping up to look into the Nehls incident.

‘Speaker Pelosi is weaponizing the Capitol Police. I’m grateful that the USCP Inspector General is standing up for his officers and reviewing her anti-democratic plot,’ the Indiana congressman said.

‘Capitol Police officers deserve our thanks — they don’t deserve to be used as political pawns.’ — DailyMail

There has been some pushback, including this open letter to Pelosi.

Rep. Andy Biggs, R-Ariz., led the letter exclusively obtained by Fox News Digital with 33 of his GOP colleagues to Pelosi and Lofgren regarding reports that Capitol Police have dug into the backgrounds of people who meet with lawmakers.

“If these reports are true, that the Capitol Police force is actively looking for and reviewing private information, then this is a gross violation of American civil liberties and an abuse of power,” he continued. “I’m calling on Speaker Pelosi and Chairwoman Lofgren to do what is best for the American people and look into this troubling report.”

Democrats have weaponized the FBI, paralyzed ICE, proselytized with CDC, and used law enforcement arms to terrorize anyone who won’t march lockstep with their agenda, right down to parents who dare to raise objections to schoolboards.

If citizens don’t take a stand against corrupt government overreach now, it may be too late.