Someone should ask Carl Bernstein if this is “worse than Watergate.”

Bernstein had said that every media-manufactured scandal when Trump was President was “worse than Watergate.”

But what happened here appears to actually be “worse than Watergate.”

Filings from the ongoing John Durham investigation state that Hillary Clinton — who had been on the legal team to Impeachment President Nixon after the Watergate scandal — had contracted a tech company to spy on Trump Tower, “a particular healthcare provider”, Trump’s Central Park West apartment building, and the Executive Office of the President of the United States to gather dirt on Trump and tie him to Russia.

We know that Hillary’s campaign had created the Russian Collusion Hoax in order to distract from her email scandal.

BOMBSHELL REPORT: Trump-Russia Collusion Was A STRATEGY By Hillary To Distract From Email Scandal

Meanwhile, Hillary is launching merch showing that she has no remorse in the illegal deletion of her emails. 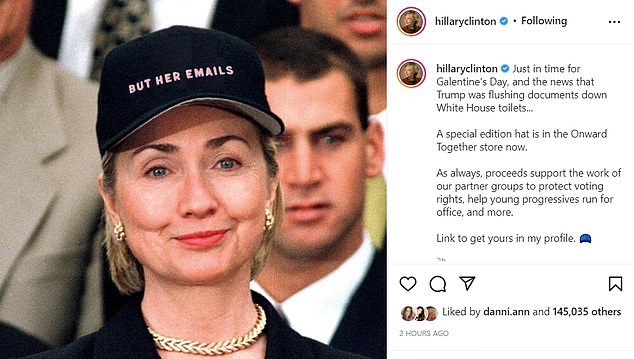 Sussman has been charged with lying to an FBI agent when he provided “evidence” to the agency in the form of data and “white papers” that allegedly showed that the Trump Organization had been in contact with a Russian-based bank. At the time, Sussman said that he wasn’t bringing the information to them on behalf of any client, but in fact, Sussman did have a client that he was billing for his work on the Russian Bank allegations — the Hillary Clinton Presidential campaign.

Fox News reports on the latest development with Durham:

Lawyers for the Clinton campaign paid a technology company to “infiltrate” servers belonging to Trump Tower, and later the White House, in order to establish an “inference” and “narrative” to bring to government agencies linking Donald Trump to Russia, a filing from Special Counsel John Durham says…

…The indictment against Sussman says he told then-FBI General Counsel James Baker in September 2016, less than two months before the 2016 presidential election, that he was not doing work “for any client” when he requested and held a meeting in which he presented “purported data and ‘white papers’ that allegedly demonstrated a covert communications channel” between the Trump Organization and Alfa Bank, which has ties to the Kremlin.

But Durham’s filing on Feb. 11, in a section titled “Factual Background,” reveals that Sussman “had assembled and conveyed the allegations to the FBI on behalf of at least two specific clients, including a technology executive (Tech Executive 1) at a U.S.-based internet company (Internet Company 1) and the Clinton campaign.”

Durham’s filing said Sussman’s “billing records reflect” that he “repeatedly billed the Clinton Campaign for his work on the Russian Bank-1 allegations.”

TechnoFog who has been on this Durham investigation from the get-go tweeted out some of the unreal details of the filing, including that the spying was on a “healthcare provider”, Trump Tower, another Trump building, and the Office of the President of the United States.

This wasn’t limited to the Office of the President of the U.S.

They also exploited data from Trump Tower, another Trump building, and a “healthcare provider.”

More on the conflict of interest re: Joffe lawyers and Sussmann lawyers. ht @HansMahncke pic.twitter.com/n9SGbrC4J9

Durham’s filing reveals that Sussman and the Tech Executive had met and communicated with another law partner — believed to be Marc Elias of Perkins Coie, who was serving as General Counsel to the Clinton campaign.

The filing states, “In connection with these efforts, Tech Executive-1 exploited his access to non-public and/or proprietary Internet data. Tech Executive-1 also enlisted the assistance of researchers at a U.S.-based university who were receiving and analyzing large amounts of Internet data in connection with a pending federal government cybersecurity research contract.”

“Tech Executive-1 tasked these researchers to mine Internet data to establish ‘an inference’ and ‘narrative’ tying then-candidate Trump to Russia,” states Durham. “In doing so, Tech Executive-1 indicated that he was seeking to please certain ‘VIPs,’ referring to individuals at Law Firm-1 and the Clinton campaign.” (Emphasis Added)

Durham also writes that during Sussman’s trial, the government will establish that among the Internet data Tech Executive-1 and his associates exploited was domain name system (DNS) internet traffic pertaining to “(i) a particular healthcare provider, (ii) Trump Tower, (iii) Donald Trump’s Central Park West apartment building, and (iv) the Executive Office of the President of the United States (EOP).”

Durham states that the internet company that Tech Executive-1 worked for “had come to access and maintain dedicated servers” for the Executive Office of the President as “part of a sensitive arrangement whereby it provided DNS resolution services to the EOP.”

“Tech Executive-1 and his associates exploited this arrangement by mining the EOP’s DNS traffic and other data for the purpose of gathering derogatory information about Donald Trump,” Durham states.

The filing also reveals that Sussman provided “an updated set of allegations” including the Russian bank data, and additional allegations relating to Trump “to a second agency of the U.S. government” in 2017.

Durham says the allegations “relied, in part, on the purported DNS traffic” that Tech Executive-1 and others “had assembled pertaining to Trump Tower, Donald Trump’s New York City apartment building, the EOP, and the aforementioned healthcare provider.”
Source: Fox News

When Sussman went to the second agency to peddle the Trump-Russia hoax, the Durham filing states that he “provided data which he claimed reflected purportedly suspicious DNS lookups by these entities of internet protocol (IP) addresses affiliated with a Russian mobile phone provider,” and claimed that the DNS lookups “demonstrated Trump and/or his associates were using supposedly rare, Russian-made wireless phones in the vicinity of the White House and other locations.”

Durham states, “The Special Counsel’s Office has identified no support for these allegations,” adding that lookups were “far from rare” in the United States.

Kash Patel, the former chief investigator of the Trump-Russia probe for the House Intelligence Committee that was led by then-Rep. Devin Nunes (R-CA) said that the new Durham filing “definitively shows that the Hillary Clinton campaign directly funded and ordered its lawyers at Perkins Coie to orchestrate a criminal enterprise to fabricate a connection between President Trump and Russia.”

Patel told Fox News, “Per Durham, this arrangement was put in motion in July of 2016, meaning the Hillary Clinton campaign and her lawyers masterminded the most intricate and coordinated conspiracy against Trump when he was both a candidate and later President of the United States while simultaneously perpetuating the bogus Steele Dossier hoax.” He added that the lawyers worked to “infiltrate” Trump Tower and White House servers.

Trump himself responded to the filing saying that the filing “provides indisputable evidence that my campaign and presidency were spied on by operatives paid by the Hillary Clinton Campaign in an effort to develop a completely fabricated connection to Russia.”

“This is a scandal far greater in scope and magnitude than Watergate and those who were involved in and knew about this spying operation should be subject to criminal prosecution,” Trump said. “In a stronger period of time in our country, this crime would have been punishable by death.”

Can someone head over to CNN and ask Carl Bernstein if the Clinton campaign using lawyers and tech companies to spy on her opponent during the campaign and continue to spy on him as he was the sitting President is “worse than Watergate”?

It would be interesting to see how he responds…

*NEW* BOMBSHELL News Out Of The UNITED NATIONS- This Is HUGE!
America's Freedom Fighters

America Mourns The Slaughter Of Twenty-One Innocents, While Inconsiderate Make It Political
The Lid