With the anti-trucker rhetoric ramped up to eleven, we knew it was just a matter of time before the Canadian government went all-in on applying aggressive ‘strike breaking’ measures.

Despite mountains of evidence that the blue-collar workers involved in the strike were disruptive only in the sense that they clogged streets with people waiting to be heard.

What people are not saying is that many of these same streets would have been thronging with people anyway if it weren’t for COVID… because this protest descended on Ottawa at the same time the city has its annual 3-week winter festival… ‘Winterlude’.

Winterlude is a ‘disruption’ that nobody seems to mind… but Wintelude doesn’t expose the polticians as petty control freaks who don’t give a rat’s backside about the rights of the ‘little people’.

The strike could be ended with the simple stroke of a pen. End the lawless suspension of Charter rights of the very blue-collar ‘essential workers’ who kept the country running while white-collar workers hid at home, worked over Zoom, and had wage-slave working stiffs hand-deliver food to their doors. Declare an end to the shutdowns and restrictions.

Now those same vocal critics (including the corporate press) ignore their own white-collar privilege while they demand that the government ‘do something’ about these people who were bravely walking the streets, getting sick and (mostly) getting better long before anyone had come up with a Covid vaccine.

Several crossing points between Canada and the US had been shut down or choked to a standstill. This was really effective in getting the point across because copycat protests have sprung up around the world. But rather than resolve the issue by fully restoring the rights of the citizens that had been unlawfully trammeled by government employees with (to borrow a phrase) ‘a pen and a phone’, they cracked down on the protesters over the weekend. Now, the federal and provincial ‘leaders’ are considering ratcheting it up further.

Trudeau wants power, but not responsibility. So he hid behind the skirts of Doug Ford, Premier of the province of Ontario. You might know him as the less-competent brother of the late crack-smoking former mayor of Toronto. Rob did a surprisingly good job as mayor despite his … unorthodox … choice of recreational activities.

Doug invoked all the same demonizing vocabulary thrown at the blue-collar protesters by the corporate media. It’s the Canadian version of the Jan 6 narrative, and invokes the same strategy: Demonize, discredit, dismiss.

If you can dismiss them as criminal or unreasonable, you don’t have to respond to the voices of the people the way one might have to in, say, a democratic process.

From the federally-owned and run Canadian Broadcast Corporation.

Ontario Premier Doug Ford is calling for an end to ongoing protests against pandemic mandates that have blocked and prevented the free flow of traffic on the Ambassador Bridge, a key commercial link between Windsor and Michigan.

In a statement Wednesday, Ford said the “illegal occupation and blockade happening in Ontario must stop.”

…”The Ambassador Bridge is one of the most vital trade corridors in our country,” Ford said. “The damage this is causing to our economy, to people’s jobs and their livelihoods is totally unacceptable. We cannot let this continue.”

…”I remain confident that our police forces in Ontario, along with Royal Canadian Mounted Police and Canada Border Services Agency, will take the appropriate steps to address the evolving situations in our cities and bring them to an end,” Ford said. —CBC

They declared a state of Emergency in Ontario.

Police have cleared the entire Windsor protest zone and are pushing back anyone remaining who may be blocking the road leading to the Ambassador Bridge pic.twitter.com/MKx3o9C4gt 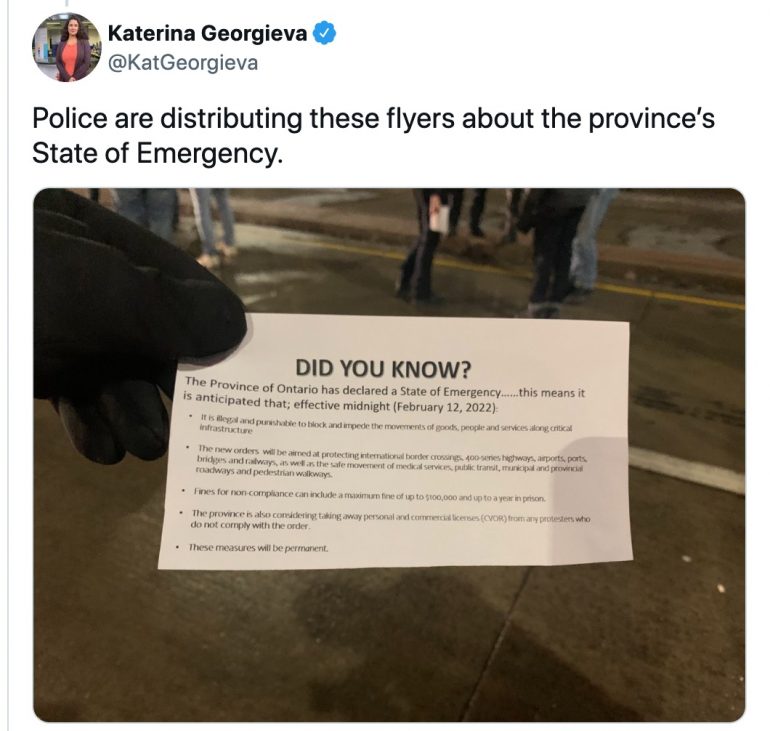 Unreal scenes in Canada as heavily armed forces move in to make arrests and tow all vehicles from ambassador bridge. pic.twitter.com/zwI6Oa2ufR

The bridge was cleared, vehicles were ‘seized’. Politicians have announced that licenses will be revoked.

Meanwhile, a few hours’ drive down the highway, here’s what Canada’s capital looked like.

Now Trudeau is looking to do the same thing in Ottawa and elsewhere in Canada.

Prime Minister Justin Trudeau has begun consulting the provincial and territorial premiers this morning about invoking the Emergencies Act to give the federal government extraordinary powers to deal with protests that have shut some border crossings with the United States and paralyzed parts of Canada’s capital.

Citing unnamed sources, CBC said Trudeau planned to invoke the Emergencies Act, a rarely used provision that allows the federal government to override the provinces and authorize special temporary measures to ensure security during national emergencies anywhere in the country.

It has only been used once in peacetime – by Trudeau’s father, Pierre Trudeau – during the so-called “October Crisis” in 1970. It was invoked twice during the two world wars, when it was known as the War Measures Act. —NationalPost

Considering the ad that his party tried to use to destroy Conservative Steven Harper back in ’06, this approach is deeply ironic.

They made a baseless accusation that the ‘evil’ Stephen Harper would have ‘soldiers on the streets with guns… we’re not making this up’. Of course, they were making it up. But now that blue-collar voices from Canada’s flyover country are making themselves heard… what is Trudeau’s knee-jerk response?

Declaring martial law to shut them down.

Quite a far cry from how he reacted to BLM marches during Covid.

He took a knee.

Of course, he did. BLM was founded by ‘trained Marxists’.

Don’t let your ‘leaders’ gaslight you… whichever country you happen to call home.