The GOP has figured out that the Democrats aren’t interested in playing nice.

There is no interest in governing ‘from the middle’ with even the slightest pretense of bipartisanship. And with one of their Senators recovering from a serious health setback, the 50-vote lockstep they had maintained to have Kamala break every tie, and push their agenda and personnel through with single-party support has derailed.

The GOP senate sees an opportunity to use leverage against Biden for a change, and some of them intend to use it.

You will remember that Democrats never got their budget passed last year. But the government didn’t close down, either. Instead, they kicked the can down the road with a bridge funding plan.

The clock is ticking on their bridge funding plan, which creates an opportunity.

A group of Republican senators is threatening to withhold support for funding the government by a Friday shutdown deadline unless they get a vote on defunding remaining federal vaccine mandates — renewing a stand they took ahead of the last deadline in December.

In an open “Dear Colleague” letter on Monday, Sens. Mike Lee of Utah, Roger Marshall of Kansas, Cynthia Lummis of Wyoming, Mike Braun of Indiana, Rand Paul of Kentucky, and Ted Cruz of Texas stated their intention to oppose a stopgap government funding measure unless their demands are met.

“We will continue to stand against these mandates until they are discontinued in ambition, design, and practice,” the senators wrote. “For that reason, we are writing to let you know that we will not consent to a time agreement that eases passage of the Continuing Resolution (‘CR’) now before the Senate absent an agreement to allow for a roll call vote on an amendment that defunds the enforcement of these vaccine mandates for the spending period covered by the CR.”

The House last week passed a continuing resolution to fund the government at current levels through March 11, and the Senate must pass it before the end of the day on Friday to avoid a government shutdown. Republican and Democratic budget negotiators hope to reach an agreement on a Fiscal Year 2022 omnibus spending bill before the new March 11 deadline, setting the first new spending levels under the Biden administration.

The last attempt to defund the mandates was in December, and it narrowly failed (50-48) along partisan lines.

The full content of the Senators’ Dear Colleague letter is here: 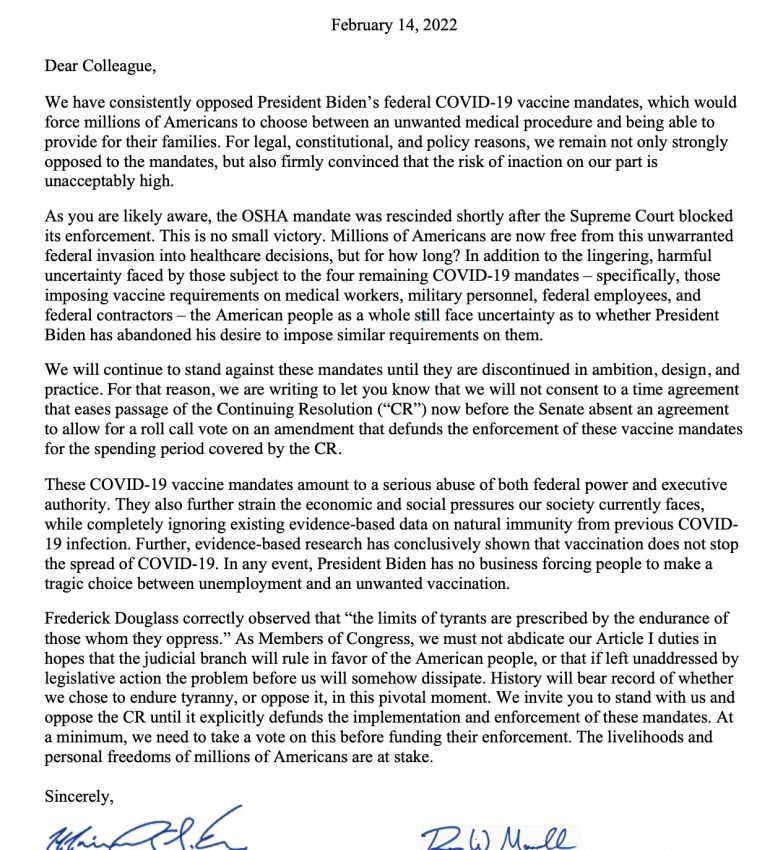 Chuck Schumer shut down the government because he wanted to run out the clock on the bill that would have paid for Trump’s wall in 2018. We can see just in this past year what a massive impact that tactic has had on the country in the long run.

Dems aren’t afraid to play for keeps. They know what they want and they will fight like hell to get it. It’s time for our side to figure out which lines in the sand we are willing to draw — and actually defend.

This is a good start.