You may never look at a Little Caesar’s menu the same way ever again.

Parents and students in Enfield, Connecticut were shocked when a recent assignment about pizza toppings made its way into a health class at John F. Kennedy Middle School.

The hand-out used pizza toppings as a metaphor to “explore your preferences” when it comes to sexual acts.

Both students and parents were stunned. Some students had no idea what some of the terms meant.

One parent whose 13-year-old son was in the offending health class in December told DailyMail.com she was mortified when she asked her boy how his day went and he explained the hidden meanings of pepperoni and olives.

‘When he told me about it, I was absolutely shocked,’ the mother, who asked not to be identified, said. ‘He’s 13 years old! What gives teachers the right to have that conversation with our children?’

Her son told DailyMail.com that he didn’t even know the meaning of the word ‘oral’ before that class.

‘I didn’t know what it meant so I looked it up on my school iPad,’ the boy said, sheepishly. ‘I just sort of laughed. I was surprised.’ 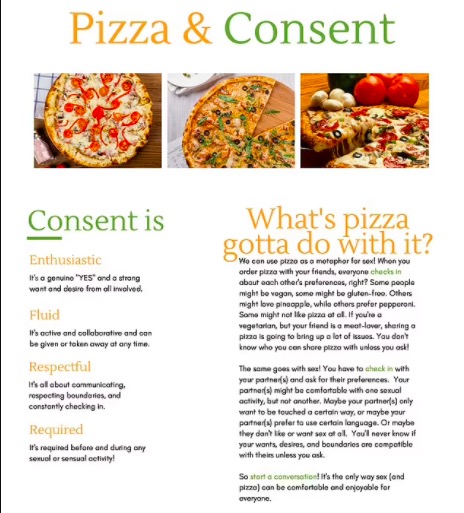 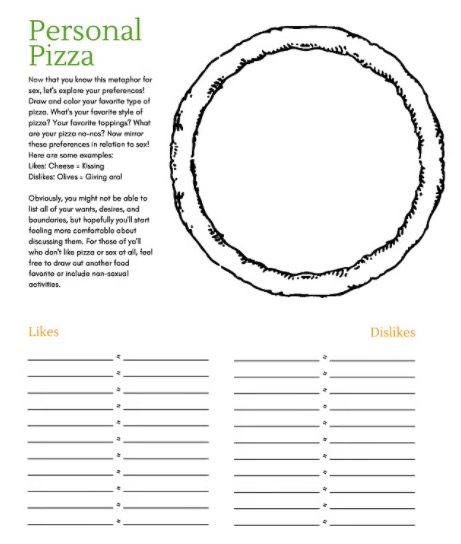 When a group of parents contacted the district’s Health and Physical Education Coordinator, Brie Quartin, she responded in an email that the assignment was posted in “error.”

‘The incorrect version, as opposed to the revised version of this assignment was mistakenly posted on our grade 8 curriculum page, and was inadvertently used for instruction to grade 8 Health classes,’ Quartin wrote in the email, which was posted on the parent group’s website. ‘I caught the error after our curriculum revision in June but failed to post the intended version.

‘The correct version of the assignment is for students to work in small groups to craft a pizza with toppings (no behaviors associated with said toppings) that would make everyone happy/comfortable using non-verbal communication only,’ Quartin added.

‘Students are then asked to reflect and discuss how thoughts or feelings can be confusing or miscontrued [sic], if we rely on non-verbal cues/communication alone. The parallel to be taught here is that when discussing pizza topping it is important that your preferences are clearly communicated to avoid any misunderstanding. This discussion then leads into how students can identify when consent is either present or not.’

Some parents are skeptical that it was a mistake.

Giselle Moore, a member of the group that had contacted Quartin isn’t buying it. She told the Daily Mail, “This went all the way down the chain of command.” She added, “I find this all very disturbing. This is stuff that would normally be discussed in a safe place in the home. This is not the school’s job to talk to children about explicit sexual behavior. The school is just normalizing this behavior, hypersexualizing children.”

Another mother, Sophia Arel, whose child is in the 8th grade at JFK Middle School, has pulled her daughter out of health class this semester. She’s concerned about what else is in there that hasn’t yet been exposed. Arel says that there is a place in public schools for learning about sex and consent, but this goes way too far.

‘They removed that part of the assignment, but I don’t know what else is going to slip through the cracks,’ she told DailyMail.com. ‘It’s vulgar and it’s just inappropriate. First of all, you’re 13, and you don’t even know your sex preferences yet. And when these kids answer these questions, where does that information get shared? Who’s interested?’

‘I don’t think there’s anything wrong with learning about sex and consent at all,’ Arel added.

‘When I was young, we learned about the basics like contraception and things like that. But we weren’t being asked what our preferences were and do we dislike giving oral. It’s just so weird. My husband, when he learned about this, he was like ”I wish there was the pizza assignment when we were kids.” He was joking, but was actually really pissed.’
Source: Daily Mail

Christopher Drezek, Enfield Public Schools Superintendent, insisted on Tuesday at a school board meeting that it was an honest mistake.

“The simple truth was it was a mistake. And I know that there are some who may not believe that. I know there are some who don’t necessarily maybe want that answer,” said Drezek. “In this particular case, I didn’t even get a chance to because the person who made the mistake jumped ahead of it before I was even notified that it had happened.”

I don’t know about you, but I still have questions…

How did the teacher not notice that this hand-out was vastly different from the one intended?

Do they not check what’s written on the sheet before giving it to students? Isn’t that part of their lesson prep?

It’s quite possible that the hand-out was a more explicit version of the one intended, but… it’s clearly been created for a fairly young group of students in mind. Are high school kids going to be coloring in a pizza? It seems unlikely.

Why would minors be asked to fill out what their sexual preferences are for a school assignment?

What kind of groomer comes up with these sorts of “health” lessons?

That is the real issue here.

There is a concerted effort in public schools to shape behavior in a way that is antithetical to conservative values and Christian beliefs.

Raise your kids right, and get them the hell out of public schools.