The protesters in Canada holding the line for freedom are a creative bunch.

The city, provincial, and federal governments have no idea how to handle the extremely peaceful protest that is happening in Ottawa.

There’s a lot of blameshifting and finger-pointing about whose jurisdiction this protest is really in and how to make it stop.

The Powers That Be at various levels of government can’t seem to agree on who should take control, and so it’s fallen on the City of Ottawa to handle it. Despite being the capital of a G7 nation, Ottawa seems to be completely ill-equipped to handle a protest like this one.

The unbelievable propaganda in the Canadian media insists that this protest is “dangerous” and a “powder keg” — it’s truly been a peaceful protest. Loud, sure, but peaceful.

YouTubers like Viva Frei, Ottawalks, and many others are posting hours of video of what is happening in real-time during the protest and it looks like a big, street party with Canadians of all races, colors, and faiths. It’s the kind of thing that the leftists in Canada that laud “multiculturalism” would normally be cheering on. Weirdly, that’s not happening.

Canada has been one of the most authoritarian places in the world during the pandemic with military testing propaganda techniques on citizens, public health tracking cell phones without consent, quarantine hotels, multiple tests, restrictions on travel, vaccine passports, no acknowledgment of natural immunity, and masks are everywhere — indoors, outdoors, alone in cars — everywhere. There is no off-ramp.

After two years, a bunch of truckers said “enough is enough” to the mandates, lockdowns, and restrictions after the government suddenly imposed a vaccine mandate for people who do one of the most solitary jobs in modern society.

Tamara Lich, one of the Freedom Convoy organizers, has said that no official from any level of government has met with any of the leaders of the protest.

Prime Minister Trudeau has stated that he has no intention of meeting with them.

The authoritarians want to crack down on this because the sight of the blue-collar truckers is upsetting the left-leaning, pajama-clad laptop class who dropped a pretty penny on their high-rise condos in the shadow of the Parliament buildings.

But the tools that they normally use to quell protests — Riot police with pepper balls, tear gas, and batons — wouldn’t work against a bunch of people who are setting up bouncy castles for their kids who are embedded in the protest.

Ottawa police say almost 25 per cent of the 418 trucks still involved in the ongoing demonstration downtown have children in them, which has hampered the force’s response and led to concerns about the children’s safety.
Source: CBC News

The city of Ottawa wants to escalate things, but they can’t.

So, they’re trying to find ways around it.

They didn’t seem too concerned about the kids when they took firewood that truckers have been burning to keep themselves warm in the below-zero weather.

They took down the kitchen that the truckers had built to provide food for themselves, other protesters, and the homeless.

Next, they announced that Ottawa P.D. and Bylaw Enforcement officers were going to go on a ticketing spree.

A few days ago, the Ottawa Police raided some of the staging areas and confiscated the fuel used by the truckers, and made an announcement that people assisting the truckers with “material supports” could be arrested.

IMPORTANT: Anyone attempting to bring material supports (gas, etc.) to the demonstrators could be subject to arrest. Enforcement is underway. #ottawa #ottnews pic.twitter.com/tp4e5d2xe1

They also went to court to stop the honking which some downtown residents are calling “torture.”

An Ottawa judge has granted an interim injunction seeking to silence the honking horns that have plagued residents of downtown Ottawa for the past 11 days.

“Tooting a horn is not an expression of any great thought I’m aware of,” said Justice Hugh McLean during a court hearing in Ottawa Monday.

The temporary injunction order is effective immediately and is meant to silence the horns at all hours for the next 10 days. It covers the zone north of the Queensway, the city’s main east-west artery.
Source: CBC News

The truckers, however, have insisted that they need to be able to draw attention to their cause and the horns do a mighty fine job of that.

The response to those actions by Ottawa Police?

People in Ottawa supporting the protest are now doing this…

In case anyone missed it, the Ottawa police stated that bringing jerry cans of fuel to the truckers was now illegal so the protesters decided to all walk around with jerry cans of air or water so that the police couldn’t know who was bringing gasoline in. Brilliant! pic.twitter.com/clUZUDwDh3

People in Ottawa are carrying around empty jerry cans in protest of police stopping individuals and seizing fuel from them.

There have also been multiple arrests of people for possessing fuel. pic.twitter.com/UcwG8axYDW

So, did it work to stop the noise?

Here’s what the protesters with the empty jerry cans and the truckers are doing now to make their voices heard.

“Let’s make honking illegal. That will stop the noise for sure…”??? pic.twitter.com/GSWUSyyoCT

Since there have been talks by Ottawa police to ticket for parking violations, some truckers are taking their protest on the road in a very slow roll circling Ottawa’s international airport. Oh, and that honking ban? It’s only in effect in the protest area in front of the Parliament buildings, so they’re honking as they go.

easy way to make the news and mess up local politics… ottawa airport now jammed with freedom fighters and slow-rolling truckers… we are the new foo fighters… pic.twitter.com/8WP4t3Eu4J 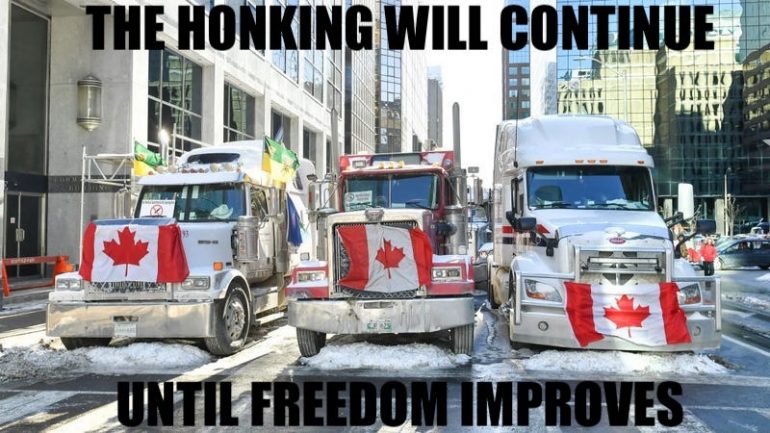