The Austin school board Superintendent remains defiant, but the Texas AG is pushing right back.

The Austin Independent School District (AISD) was proudly posting that they were going to celebrate a “Pride Week” this week.

The week-long celebration of everything LGBTQIA+ (as they abbreviate it) will culminate in a “Party in the Park” on Saturday, March 26.

Thank you to @AustinEdFund for supporting the @AustinISD Pride Week & Party in the Park! Your commitment to creating an inclusive space in our classrooms is crucial. Visit https://t.co/mJ9nbV9J2g to learn more about becoming a sponsor this year. #InspiretheFuture#AISDPride pic.twitter.com/IqaO9R0q5h

While the tweets above refer to what’s happening at a high school, the District didn’t exactly advertise that there would be a special “Pride Week” curriculum for all students from as young as Pre-K.

According to Libs of Tik Tok, the schools have instructed young students to keep the “celebration” a secret.

This pride parade was in the same school that is set to start “Pride Week” today which they made students promise to not tell anyone about. https://t.co/WRtOMaj2BQ

The people pushing this don’t seem to understand how parents could take exception to the introduction of topics of sex and gender to 3- to 7-year olds. That’s why they told small children to keep it a secret from their parents. 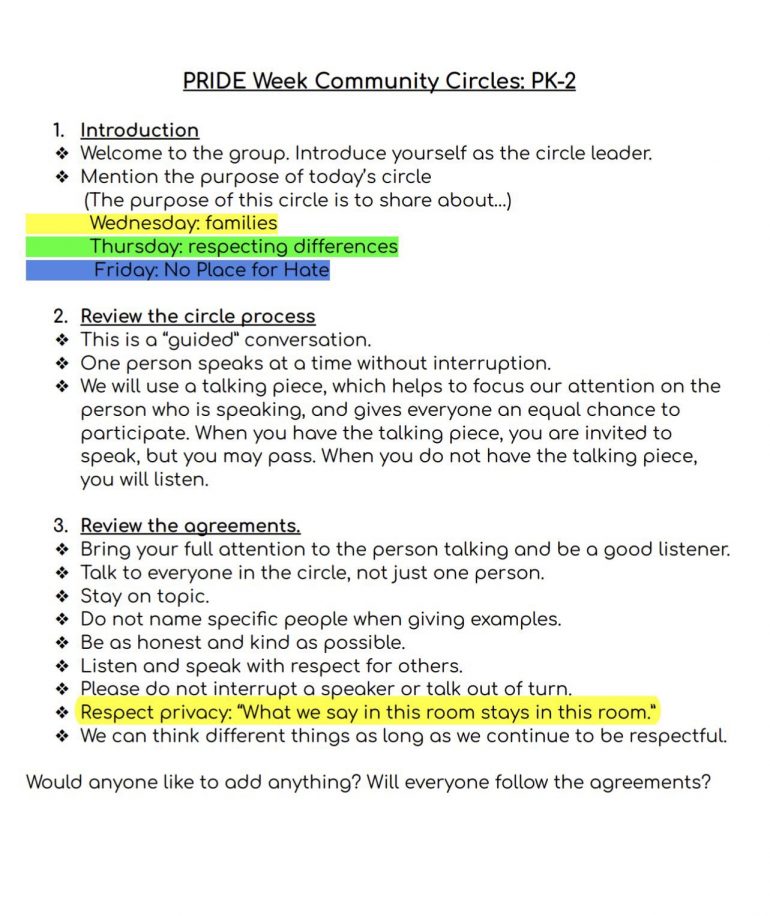 Interestingly, keeping secrets from parents is precisely what pedophiles do when grooming children for abuse. This is not to say that the teachers and leaders in the AISD are pedophiles, but that they’re using the same behavior because they know that some parents would be upset. Keeping what is discussed secret from parents also prevents parents from countering the overt indoctrination in fringe gender theory that confuses and frightens very young children.

It also puts children at risk from abuse by someone else if a trusted authority figure like a teacher assures them that discussions on topics like body parts can be kept secret from parents.

This is precisely why the term “groomer” is an appropriate label for teachers that want to introduce these topics early — they’re doing the work of groomers even if it’s unintentional. 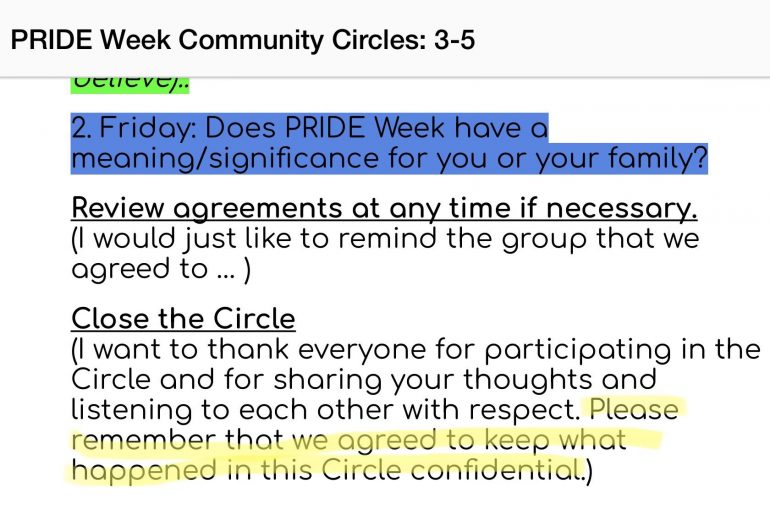 I knew she would delete it so I saved it. The assistant principal posted this video of a pride parade in school to her Twitter account. pic.twitter.com/GrUdr9V4MS

This is the assistant principal… of course… ??‍♀️ pic.twitter.com/pHjPwHEy9n

Elementary. The entire @AustinISD is celebrating “pride week” this week. Parents be on the lookout. DMs are open. pic.twitter.com/Hi7PVvVcC1

After Doss Elementary was exposed online by the intrepid Libs of Tik Tok account, they changed some of the wording of the event so that parents could be told about what was said in the “community circle” — but they were shamed into it.

Doss Elementary updated their pride week activity instructions after parent and social media backlash. It now states that students can share information with their parents. pic.twitter.com/JUc3n2BsNl

Doss Elementary is set to have another pride parade tomorrow morning. The principal moved it to indoors and told parents they can no longer attend after this video went viral yesterday. Looking for a staff member who wants to help fight back. You will be 100% anonymous. Dm me https://t.co/TsTV1AW5KN

Today, I sent a letter to @AustinISD for their curriculum and lesson plans that constitute “human sexuality instruction” governed by state law.

The Texas Legislature has made it clear that when it comes to sex education, parents—not school districts—are in charge. pic.twitter.com/pVZ4Sj8GMF 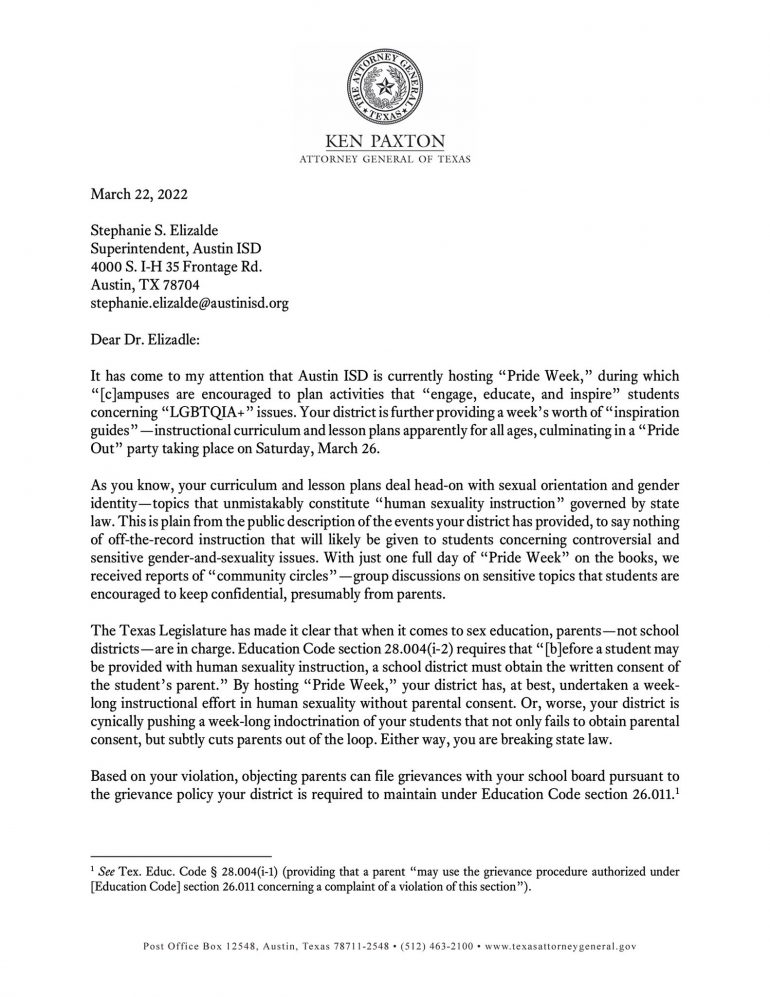 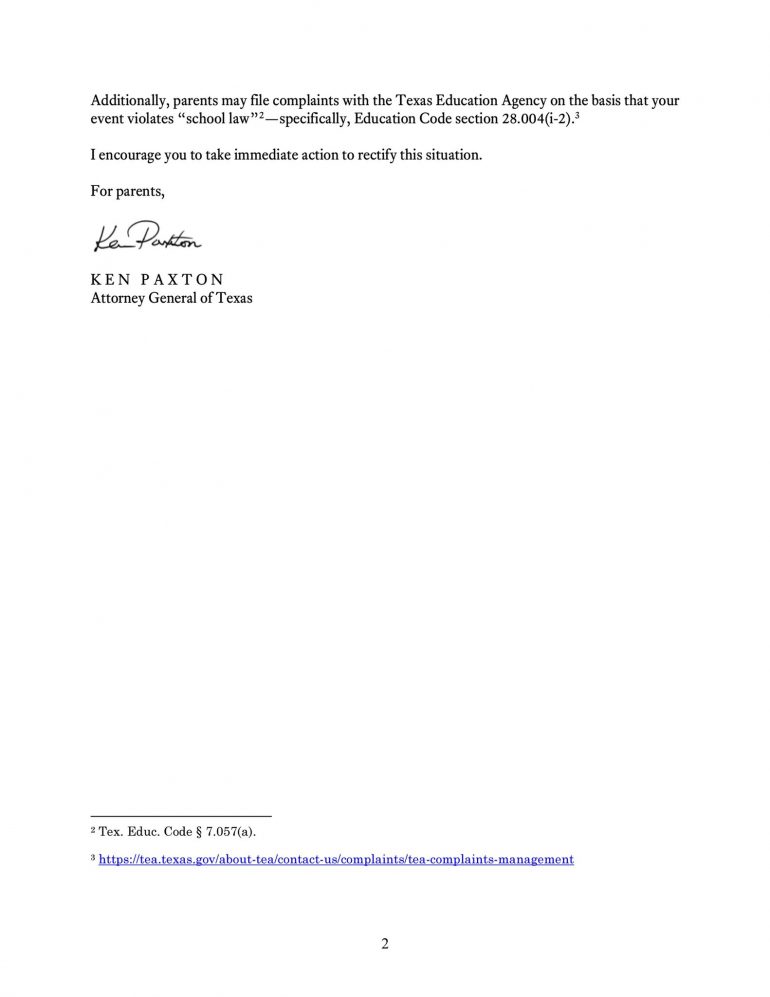 Paxton sent a letter to Austin ISD Superintendent Stephanie S. Elizalde informing her that she has violated Texas law because the State’s Education Code states that “before a student may be provided with human sexuality instruction, a school district must obtain the written consent of the student’s parent.”

“The Texas Legislature has made it clear that when it comes to sex education, parents – not school districts – are in charge,” Paxton wrote. “By hosting ‘Pride Week,’ your district has, at best, undertaken a week-long instructional effort in human sexuality without parental consent. Or, worse, your district is cynically pushing a week-long indoctrination of your students that not only fails to obtain parental consent, but subtly cuts parents out of the loop. Either way, you are breaking state law.”

Liberal school districts are aggressively pushing LGBTQ+ views on Texas Kids! All behind parents’ backs! This is immoral and illegal.

I will work with and for parents to hold deceptive sexual propagandists and predators accountable. See my letter to @AustinISD ⬇️ https://t.co/WswUrVw0XT

How it started How it’s going pic.twitter.com/XcFm2sPqfb

The Superintendent of the Austin Independent School District remains defiant.

I want all our LGBTQIA+ students to know that we are proud of them and that we will protect them against political attacks. https://t.co/fNGiaoNM3q

Yeah, well, we’ll see how that goes over at the next round of school board elections.

We saw how the new voting block of angry parents worked out well in Virginia. Do you think that the “Don’t Mess With Texas” parents are going to be any less upset about the political and social indoctrination of their children at the expense of their education?

Good luck at the next school board meeting, ASID trustees. You’re probably going to get an earful.

Homeschool your kids if you can, and if you can’t, be loud and make sure your voice is heard at the school board.