Is Cacklin’ Kamala completely clueless? It sure seems so.

She’s been doing such an awful job on the world stage lately.

Remember earlier this month when Vice President Harris appeared on a radio show aimed at a primarily Black audience and explained Russia’s invasion of Ukraine as though the audience was either developmentally delayed or a bunch of Kindergartners?

Then there was the weird cackling after making an awkward joke when asked about Ukrainian refugees.

Ohn Friday, VP Harris was at the Democrat retreat in Pennsylvania and gave a fairly lengthy speech. While she was talking about the need for the world to be united in support of Ukraine, she said that Ukraine was part of NATO.

Does Kamala Harris, our sitting Vice President, think Ukraine is a part of NATO?

If you’re feeling masochistic, you watch Kamala’s entire speech to the Democrats here:

Now, people can make mistakes, but this is a pretty huge one considering she was literally just visiting NATO member nations and discussing the NATO position on Ukraine for a week.

It shows a fundamental misunderstanding of the cause of the conflict itself. Part of the thing that set off Putin in the first place was the possibility that Ukraine might join NATO. He wasn’t so keen on having so many NATO nations right along the Russian border when there are lucrative fossil fuel deposits to confiscate.

But it also shows a misunderstanding of the NATO agreement. If Kamala thought that Ukraine was already a member of NATO, then Putin’s invasion would have triggered Article 5 of the treaty and that would mean that all member nations — including the United States — would be at war with Russia.

Kamala was mocked mercilessly online over the weekend for the embarrassing flub that she didn’t seem to realize that she had made.

By Monday, the official White House transcript added a three-letter word that makes Kamala not look like a complete idiot after her meetings with NATO leaders in Europe. The word “and” was added to make it appear that Kamala knew that Ukraine is not part of NATO.

Russia’s invasion threatens not just Ukraine’s democracy, it threatens democracy and security across Europe. And by extension, when democracy is threatened anywhere, it threatens us all. And the ocean that separates us will not leave us untouched by this aggression.

So I will say what I know we all say, and I will say over and over again: The United States stands firmly with the Ukrainian people [and] in defense of the NATO Alliance. (Applause.)
Source: WhiteHouse.gov (Emphasis Added)

Here’s the screenshot for posterity. 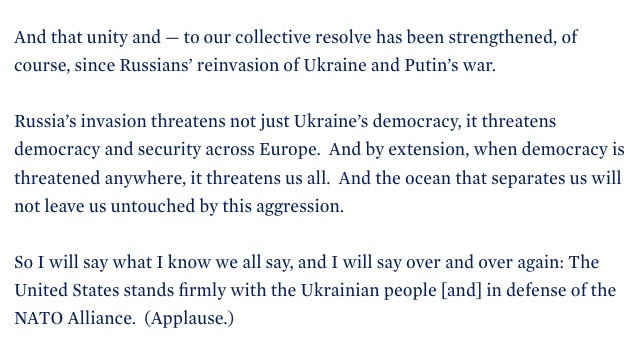 It completely changes the meaning and is an easy fix for the stupidity spouted by Clueless Kamala who appears to be making the sitcom “Veep” into a reality.

The only good decision that Joe Biden made was following Obama’s lead in picking a running mate — he chose Kamala Harris as his Veep because her incompetence makes him look good and nobody wants this woman to be President.

The guy that was Obama’s “assassination insurance” is now running the country and has a Vice President that is even more incompetent than he was in the role.