Not everyone is cut out to be a War Correspondent. It is, by definition, an intensely dangerous job.

But as long as there are people who want to know what’s going on in the world’s various hotspots, there will be people willing to take that risk.

Most of the time, they have a few harrowing stories they can tell their grandchildren, but they come home again. But not everyone is so fortunate.

There have already been a couple of American journalists whose names have been added to the casualty list.

A reasonable person might expect other American newsrooms to see the seriousness of the moment and lay aside their partisanship long enough to stand in professional solidarity with respect to other journalists, and their teams, who have paid the highest price to get the story.

Unfortunately, to think that would be to forget just how corruptly partisan our news media has become.

Here’s what you need to know about the casualties:

A Monday attack on a Fox News crew reporting near the Ukrainian capital of Kyiv left two of the network’s journalists dead and its correspondent severely injured, the channel said on Tuesday.

Killed in the attack were Pierre Zakrzewski, a 55-year-old longtime war photojournalist, and Oleksandra “Sasha” Kuvshynova, a 24-year-old Ukrainian journalist working as a consultant for the network. Fox News correspondent Benjamin Hall was seriously injured and remains hospitalized.

…Both deaths were announced by Fox News Media chief executive Suzanne Scott, who said the team’s vehicle came under fire as they were reporting. Anton Gerashchenko, an advisor to the Ukrainian interior minister, blamed artillery shelling by Russian forces.

A genuine professional of any stripe ought to know that rejoicing in the suffering of someone’s misfortune is a bad look. But we’ve long since learned not to expect professionalism from CNN.

Right on cue, CNN analyst Susan Glasser took this opportunity to dance on some graves. 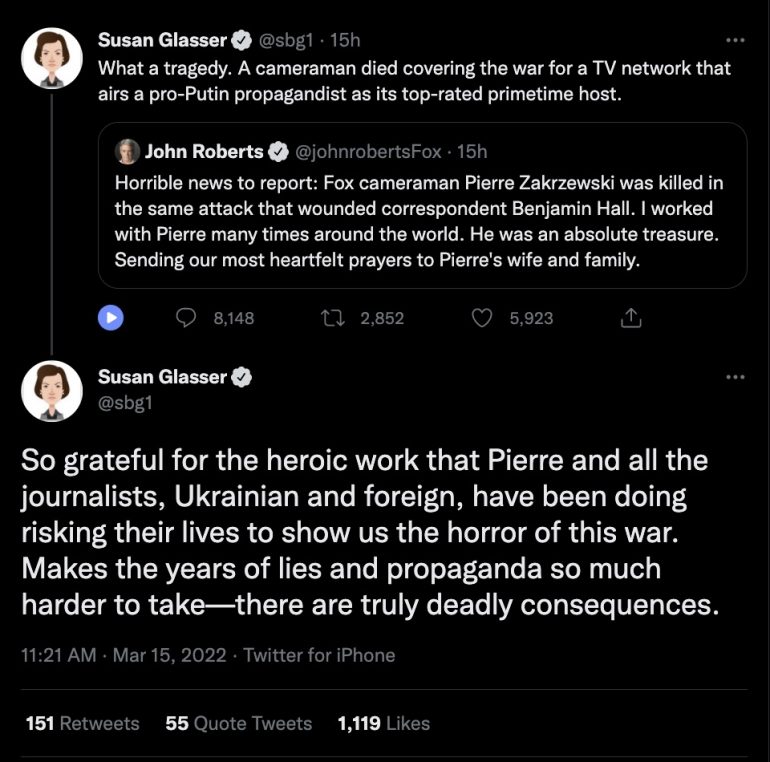 Hours later, she went on TV like nothing had happened.

Just hours after sending out her tweet, she appeared on CNN for more than eight minutes to discuss the chaos in Ukraine. During that time, she did not address her tweet and was not asked to do so by Newsroom hosts Victor Blackwell and Alisyn Camerota. — Mediaite

She likes to talk about lies and Propaganda, does she?

Does she mean lies and propaganda like Hillary’s campaign hiring a British Spy to funnel literal disinformation from a Russian spy in a (successful) effort to weaponize the FBI against a Presidential nominee, while claiming for years that Putin had rigged the election despite all evidence to the contrary?

THAT kind of ‘lies and propaganda’? Because that’s been CNN’s bread and butter for years.

Even their own employees have described CNN’s reporting as ‘propaganda’ when thought they were having a private conversation. WATCH: Project Veritas Busts CNN Admitting To Running Propaganda … Their Words, Not Ours

Between Glasser and her husband, they have got a lot of the usual suspects covered: CNN, New Yorker, NYTimes WH Correspondent, MSNBC Analyst. If there was a WaPo connection, that would complete the collection.

Naturally, none of those outfits has steered the American public wrong at all over the past 6 years or so. Not even once.

Not even that time a Pulitzer Prize was awarded for a bogus news story slandering the 45th President… a prize they have refused to return.

Ladies, you can do better than role models like this heartless harpy.

You can start here: