Was this another of Biden’s famous “gaffes” or was this an accidental slip of what this administration is planning?

Let’s all hope that this is just one more example of Joe Biden being a complete ignoramus speaking nonsense rather than a President and a bunch of West Wing LARPers itching to begin a hot war with a nuclear power.

During Biden’s trip to Europe, he addressed the U.S. troops in Poland. After sitting down for pizza with the 82nd Airborne, the Commander in Chief told the troops about the bravery of many ordinary Ukrainian people defending their homeland that has been evident for the past month. While waxing on about how a 30-year old woman faced off against a Russian tank with a gun, Biden told the troops that they’d witness that sort of thing themselves “when you’re there.”

This is in stark contrast to the administration’s repeated insistence that the United States would stay out of the conflict to avoid triggering “World War III.”

Biden made the remark while addressing members of the Army’s 82nd Airborne Division after lunching on pizza and posing for selfies with dozens of paratroopers at a mess hall in Rzeszow, southeastern Poland.

“You’re going to see when you’re there, and some of you have been there, you’re gonna see — you’re gonna see women, young people standing in the middle in front of a damned tank just saying, ‘I’m not leaving, I’m holding my ground’,” Biden said.

The White House did not immediately respond to The Post’s request for clarification.
Source: New York Post

“You’re going to see when you’re there,” he told 82nd Airborne Division in Poland.

You’re going to see women, young people standing in the middle, in the front of a damn tank saying I’m not leaving.” pic.twitter.com/utCoYAnczI

So, did he mean it, or was it just an “apparent gaffe” as the NY Post has labeled it?

Who the hell knows at this point? Biden is a known liar.

He’s lied about everything — from stealing a speech from a U.K. politician to lying that the tragic car accident that killed his first wife and daughter happened because the other driver was drunk.

He used the Charlottesville Hoax as the reason for running for President and lied during the debate that Hunter’s laptop was “Russian disinformation.”

Joe Biden tells so many lies that it’s amazing he doesn’t have a literal forked tongue to go with his figurative one.

And it’s not just him — to call his staff in the West Wing “incompetent” is an insult to people who are incompetent.

The Biden-Harris White House has been gaslighting Americans that every failure that can be directly connected to their policies — the border, Afghanistan, inflation, high gas prices, lower than expected employment numbers — isn’t actually the fault of the administration.

But they’ll also tell you to be grateful for that 16 cents you could save on your Fourth of July BBQ and you should be singing their praise for a couple-cent drop in gas prices right before a massive spike.

Here’s the White House transcript of what Biden said.

I spent a lot of time in Ukraine when I was a senator and Vice President. I’ve spoken to the Rada in the days when they, in fact, didn’t have what you’d call a democracy, and was there in the Maidan when the former leader had to take off and head into Russia.

And — so, you know, with the Ukrainian people — Ukrainian people have a lot of backbone. They have a lot of guts. And I’m sure you’re observing it. And I don’t mean just their military, which is — we’ve been training since back when they — Russia moved into the — in the southeast — southeast Ukraine — but also the average citizen. Look at how they’re stepping up. Look at how they’re stepping up. 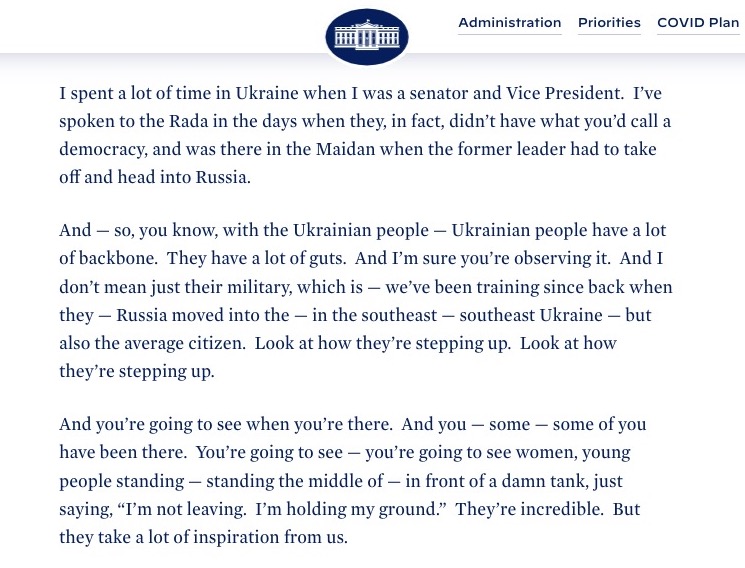 It’s not like we’re going to get the Regime Media to take a break from their cheerleading and butt-kissing to actually cover the administration with an ounce of criticism.

Here’s CNN’s Poppy Harlow gushing about Biden’s visit with the troops after Biden talks to the troops about his son, Beau, who he treats as though he died in combat when he actually died of an aggressive brain tumor.

‘What a Wonderful Uplifting Moment!’ CNN’s Poppy Harlow Gushes About Biden Visit with Troops in Poland https://t.co/AmZ7Xo5Nyy via @mediaite pic.twitter.com/Esv9cW3f7k

It’s this sort of thing that made “Let’s Go, Brandon” an effective cudgel against both the current administration and the Media Hacktivists that continue to uncritically report every Democrat talking point and breathlessly praise every photo-op.

Meanwhile, in this administration, the Biden gaffe machine is running almost as fast as the money printers are.

When Biden was in Brussels, he answered a question about what the U.S. or NATO would do if Russia began using chemical weapons in Ukraine.

While in Brussels meeting with world leaders about Russia’s invasion of Ukraine, a reporter asked President Biden if the U.S. or NATO would respond with military action if Vladimir Putin used chemical weapons. pic.twitter.com/bGdnQykA1d

He later “clarified” this answer by saying that there would be a response “in kind.”

This is a terrible answer by Biden about how America will respond if Russia uses chemical weapons in Ukraine — an extremely important question: pic.twitter.com/agrm7KS781

So, hypothetically, if Putin uses chemical weapons at a hospital in Ukraine, NATO is supposed to respond “in kind”? That seems war-crime-ish.

Does… does Joe know what “in kind” means? You’d think he would since Hunter’s “Quid Pro Joe” business has been keeping the family rolling in cash for the past few years.

This “in kind” flub was then walked back by National Security Advisor Jake Sullivan on Friday.

“The United States has no intention of using chemical weapons, period, under any circumstance,” Sullivan told reporters onboard Air Force One.

The administration is doing the same thing with what Biden said to the troops in Poland.

UPDATE: A @WhiteHouse spokesperson tells me: “The President has been clear we are not sending U.S. troops to Ukraine and there is no change in that position.”

He wasn’t clear. If he was, there wouldn’t be this sort of confusion.

But the Democrats chose as the President of the United States of America a man who was already known as a “gaffe machine” and now can’t articulate a coherent sentence because they didn’t like the other guy’s mean tweets and they keep having to do Clean Up on Aisle Biden.

Elections do indeed have consequences.

God help us all. We’re going to need it.