If you are wondering why Dems are working so hard to label dissent as misinformation, it’s because they want the same free ride here that Trudeau gets in Canada.

When safely at home, Trudeau can count on a mostly docile public conditioned to believe the government-supplied lies for decades. (But that all changes once he travels abroad.)

Not only does Canada have a deeply partisan State-controlled Pravda-like broadcaster in the form of the Canadian Broadcasting Corporation (CBC), but even other major news sources have the double incentive of government handouts at the corporate level when certain political parties are in power, and concerns about job security at the employees level. The reason so many ‘journalists’ are carefully staying ideologically ‘pure’ is so that they can always fall back on work in the massive CBC if they have to.

At home, Trudeau can be as big a jackass as he wants, and few are left with the will or the means to truly hold his feet to the fire. But step outside of Canada and things are different.

With Europe facing the specter of war, while grappling with the hundreds of spinoff concerns raised by the invasion of Ukraine, Trudeau hopped a plane to the EU to spout his typical self-congratulatory woke nonsense, using an international platform to demonize his critics.

Trudeau talks about “cynical populists” who “pretend to have easy solutions that prey upon people's fears".

Hasn’t he been cynically exploiting people’s fear of covid for electoral gains? Isn’t his useless travel ban an easy solution? No self-awareness. pic.twitter.com/J4oaHafXJs

That did not go well for him. Many of the leaders showed their contempt by walking out for his speech.

Oh, sure the cheerleader media in Canada had his back, shamelessly defending the indefensible…

…but then someone else took the floor, and Trudeau was forced to sit and watch as he was publicly humiliated in front of a global audience.

Here’s a thumbnail so we know a little about the man who stood up to address what Trudeau had said:

Mislav Kolakušić (born 15 September 1969) is a Croatian lawyer and politician who has been a Member of the European Parliament for Croatia since 2 July 2019, having been elected to the position at the 2019 election. Previously, he served as a judge at the Zagreb Commercial Court.

Kolakušić let Trudeau have it with both barrels.

PM Trudeau, in recent months, under your quasi-liberal boot, Canada ?? has become a symbol of civil rights violations. The methods we have witnessed may be liberal to you, but to many citizens around the?it seemed like a dictatorship of the worst kind. pic.twitter.com/FZuc6aDZ1I

‘…unfortunately, there are those among us who would trample on these fundamental values… Canada, once a symbol of the Modern world [turns, looks directly at Trudeau] has become a symbol of human rights violations under your quasi-Liberal boot in recent months. We watched how you trample women with horses, how you block the bank accounts of single parents so that they can’t even pay their children’s education and medicine, that they can’t pay utilities, mortgages for their homes. To you these may be liberal methods, for many citizens of the world, it is a dictatorship of the worst kind. Rest assured that the citizens of the world united can stop any regime that wants to destroy the freedom of citizens either by bombs, or harmful pharmaceutical products. Thank you.’

He wasn’t the only one. A member from (the formerly Communist state) Romania gave a written statement denouncing Trudeau because he had no intention of dignifying Trudeau at all.

In the statement, Terheș blasts Trudeau for having horses trample protestors during the Freedom Convoy crackdown

I've translated it and will tweet relevant parts below

The highlights singled out by that same account are a level of honest critique of Trudeau that is nothing less than savage. They speak for themselves. 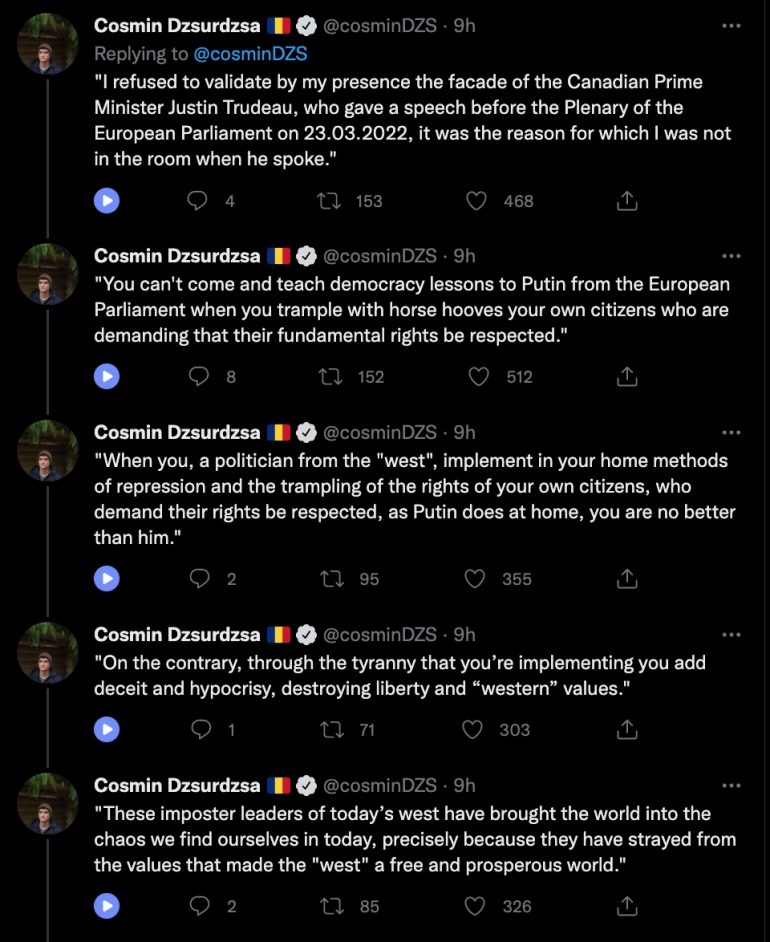 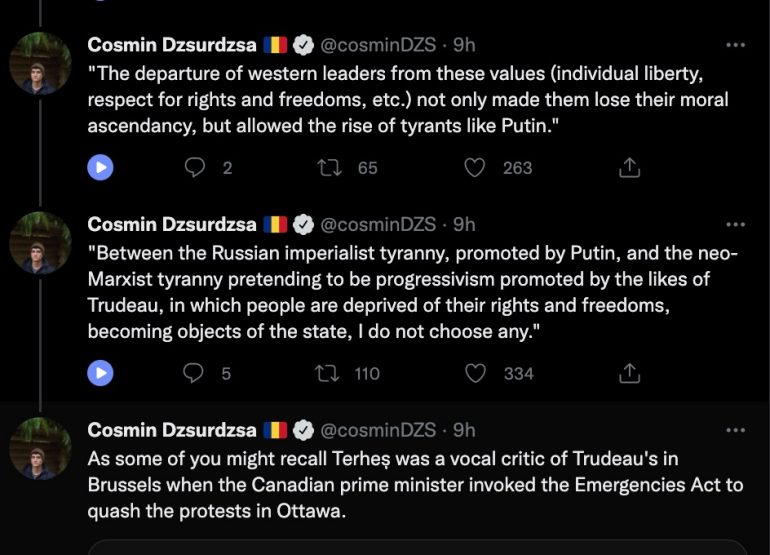 “you are no better than him [Putin].”

“Between Russian imperialist tyranny…promoted by Putin … and the new-Marxist tyranny … by the likes of Trudeau … I do not chose any.”

Congratulations, Blackface Hitler! You don’t just admire Cuban dictators, you are now seen by the ‘international community’ you’ve spent your life adoring as no better than one of them.