Imagine your baby has a health issue and while you’re trying to figure out what is wrong, the authorities blame you for it and take away your child. According to one family, that’s what happened to them.

Marissa and Levi Anderson, parents of 10-month old Cyrus, said that their son was “medically kidnapped” after Marissa canceled a medical appointment for him on Friday. He has been kept at St. Luke’s Pediatric Center where his parents were told that no patient by the name “Cyrus Anderson” was registered.

The parents are now saying that Cyrus didn’t get proper treatment at St. Luke’s and Cyrus is in worse condition than when he went in. Cyrus is vomiting and constipated. He hasn’t had a bowel movement in two days and is now rejecting food.

The kicker is that the reason that he was taken from his family in the first place is because of concerns of “malnourishment.”

According to Marissa’s father, Diego Rodriguez, Cyrus became ill in early March with vomiting and was taken by his parents to St. Luke’s Pediatric Center. He spent about a week there and was released “after undergoing every exam, test, and review imaginable.”

Cyrus apparently has a medical issue where his body cannot fully digest proteins yet, so he is still on breastmilk because he is not quite ready for solid food. According to the Mayo Clinic, most babies are ready for solid foods between 4-6 months of age, but medical situations like Cyrus’s and specific food allergies can alter that general guidance.

Unsurprisingly, the inability to have solid food plus vomiting meant that Cyrus’s weight was lower than the average baby of the same age. He was scheduled to have weigh-ins and have his health assessed regularly.

After being discharged from the hospital, Cyrus’s parents brought him in regularly to Dr. Aaron Dykstra of Functional Medicine of Idaho for additional review and weigh-ins.

On Friday, March 11, Marissa woke up feeling under the weather and called to cancel the weigh-in for that day. Then all hell broke loose. Dr. Dykstra called Child Protective Services (CPS) and reported “child endangerment,” for missing an appointment. CPS then contacted Marissa via text message.

Here is what happened according to Cyrus’s grandfather.

Shortly thereafter, two police officers came to their address, asking for Baby Cyrus—but Marissa, Levi, and Cyrus were not there. So they put out a BOLO “Be on the Lookout” for Levi’s truck. And last night, Levi, Marissa, and Cyrus, along with the rest of my family, were over at a friend’s house enjoying dinner. We all left together in 2 separate cars and were followed by a Garden City police officer to a nearby gas station.

The police officer detained them and then called for backup. Within minutes, multiple officers arrived. The Meridian detectives then arrived along with well over a dozen officers and squad cars. They acted like they were arresting Al Capone. The officers violated multiple rights, did not follow the constitution or other laws and statutes and arrested both of my daughters, handcuffed Levi, and then forcefully stripped Baby Cyrus away from his crying mother (my daughter), for alleged “child endangerment” because they canceled a pediatric appointment and the doctor called CPS claiming that Cyrus was “underweight.” Marissa was smart enough to Facebook Livestream the whole ordeal because they took her into the Ambulance to rip Cyrus out of her arms so it was out of public view.

That’s it. That’s the sum total of the ENTIRE STORY. An appointment was canceled. My grandson is “underweight.” And that was enough for an overzealous Pediatrician, a control-freak social worker, and scores of tyrannical police officers to violently rip my grandson away from his loving parents under the guise of a “medical emergency.”

A whole host of officers confronted this young family at a gas station because they didn’t take him for a check-up.

North Idaho Exposed published a video on the situation.

Here is how the local media is reporting it.

The Meridian Police Dept. said in a news release issued later Saturday morning that police on Friday received an Idaho Health and Welfare referral about a ten-month-old child who had been admitted to the hospital on March 1 “after medical personnel determined the child was suffering from severe malnourishment.”

The child was discharged into the care of its parents on March 4, after the child was able to gain enough weight. However, during a follow-up appointment, Meridian Police said, it was determined that the child had again lost a significant amount of weight, but the parents canceled the next follow-up appointment and could not be located. Meridian Police had been advised that the child’s condition could lead to severe injury or even death if left untreated.

Meridian Police received a warrant to enter the home, but discovered the parents and the child had left before officers could check on the child. Garden City Police located a vehicle driven by the father of the child and conducted a traffic stop on Chinden Boulevard. That’s when Meridian Police took the child into custody, then took the child to St. Luke’s Meridian.
Source: KTVB News

The family disputes this claim. Here is what Rodriguez wrote on his website, Freedom Man.

Local fake news station KTVB published an article about Baby Cyrus’s kidnapping, highlighting the fact that Ammon Bundy was arrested for protesting at the hospital last night. The article was full of misinformation. Here are the facts:

The Meridian Police Dept. said in a news release issued later Saturday morning that police on Friday received an Idaho Health and Welfare referral about a ten-month-old child who had been admitted to the hospital on March 1 “after medical personnel determined the child was suffering from severe malnourishment.” This is just a total mischaracterization of the facts. Baby Cyrus had begun vomiting a month or so ago when Marissa started to introduce solid foods to him. Her and Levi spent countless hours researching every possible cause—going to doctors, naturopaths, specialists, and more—and all at great out-of-pocket expense. Cyrus would get better and then relapse. This happened a few times. As part of their continued research and care for Cyrus, they decided (reluctantly) to take Cyrus to St. Luke’s so he could get an IV to help re-hydrate him after vomiting so much. The plan/idea was for him to be well so they could try different foods, formulas, or whatever—to see what Cyrus could take and what he could not.

To claim that “medical personel determined the child was suffering from severe malnourishment” is an outright lie, and is obviously designed to make it look as if Levi and Marissa were not taking care of Cyrus.

Meridian Police said Health and Welfare was able to contact the child’s father, who agreed to bring the child in for an examination, but then failed to show up. This is also a gross mischaracterization of the facts. Levi did contact Nice Loufoua, the social worker who had texted Marissa, and asked her what was going on? She refused to give any answers to him. He asked what they thought was wrong with Baby Cyrus since they were given a clean bill of health and discharged from the hospital. Nice refused to give Levi, Cyrus’s father, any information and just demanded that he go immediately to a clinic because it is a “medical emergency.” But she refused to tell him what the “medical emergency” was. She then texted him the address for “Faces of Hope Victim Center.”

Would you take your child to a place called the Faces of Hope Victim Center after being verbally harassed by a social worker? Upon looking up this place, you can see that this is a victim center for child abuse. Levi and Marissa wisely recognized this as a setup.

Marissa livestreamed the ordeal on Facebook. This video shows the police confronting the family at a gas station. Here is where she is told that she has to hand over Cyrus or go to jail.

He also posted photos of the people who are responsible for Cyrus’s removal from the custody of his parents. 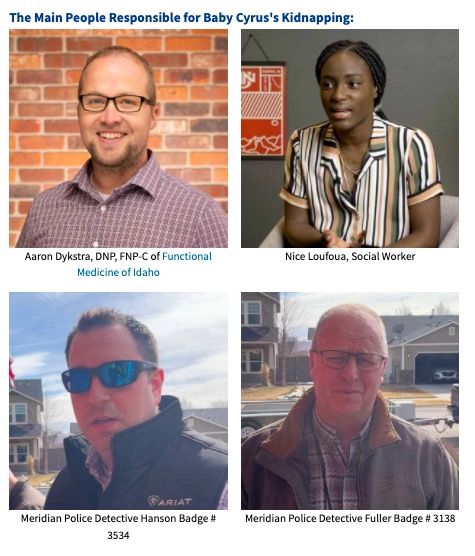 A protest was organized outside of St. Luke’s on Sunday. Diego Rodriguez spoke about what was happening with his grandson.

Here is Fred Birnbaum of “Idaho Freedom Foundation” speaking about the unbelievable situation.

Here is the full protest that happened on Sunday outside of St. Luke’s Hospital.

The whole situation is being now being politicized because Ammon Bundy, an independent gubernatorial candidate and leader of the “People’s Rights” movement has come out against the forcible removal of Baby Cyrus from his parents.

This situation is just unbelievable. The child was sick not well, his parents took him for treatment, and the authorities decided to take action because they felt that he was not being cared for properly. Meanwhile, after a two-day stay in the hospital, he’s apparently worse than he was before he went in. Do the parents get to hold the hospital accountable for that? Probably not.

We’ve seen that the authorities — whether it’s the government, law enforcement, or medical experts — have all been very comfortable pushing against and outright overstepping the limits of their authority for the past two years.

If you don’t think that happens, then you haven’t been paying attention since March 2020.

Rick Green from Wallbuilders and Patriot Academy set up a GiveSendGo campaign for Baby Cyrus, Marissa, and Levi. Here is what he wrote on the GiveSendGo fundraising page:

Imagine your 10-month old baby being ripped from your arms and you’re told by the tactical-dressed police to “be on your merry way.”

Imagine this happening to YOUR baby grandson & YOUR sweet daughter who is a caring & loving mother to that little one.

That JUST happened to my dear friends a few hours ago & they need our help to get Baby Cyrus back from an irrational, unscientific, power-hungry social worker and out of control police force in Meridian, Idaho.

The entire story is below & at www.freedomman.org/cyrus w/specific action requests from the family, but I’m personally asking you to donate to help with legal fees necessary to get Baby Cyrus back & make sure this does not happen to other good families. 100% of your donation goes to the family. My wife, Kara, and I will personally cover all fees to make sure.