The Left has been winning the marketing war in policy battles for years.

Kids in Cages was a very effective way to whip outrage — even though it was Obama who built the cages and Joe who built so many more in his first year.

Year after year, issue after issue the Left and their complicit buddies in Hollywood, the news media, and Big Tech coordinate their efforts to help promote Democrat policies and make Republicans look like the villains in each and every story.

Then they get the activists involved, who in turn pressure the Corporations to ‘boycott’ States who don’t toe the line. Atlanta had their All-Star game taken away… for a voting Bill? Meanwhile Coke, who helped lead the charge in boycotting Georgia has refused to discontinue doing business in Russia or China despite warmongering on Russia’s part and concentration camps with corporate slave labor in China.

Florida is pushing back against the woke agenda of teaching increasingly sexualized content to children at ever-younger ages. Predictably, the Left doesn’t like it.

They have decided to dub it the ‘Don’t Say Gay’ bill, even though the bill itself does not single out homosexuality.

Despite any denials to the contrary, their actions tell us that the activists WANT to push an agenda of sexualizing children at younger and younger ages.

De Santis’s own (competent) answer to Jen Psaki had something to say about that.

Pushaw is not accepting the ‘don’t say gay’ narrative. She’s flipped it by accusing those of unnecessarily promoting sexualization of children as either being ‘groomers’ or ‘pro-groomer’. 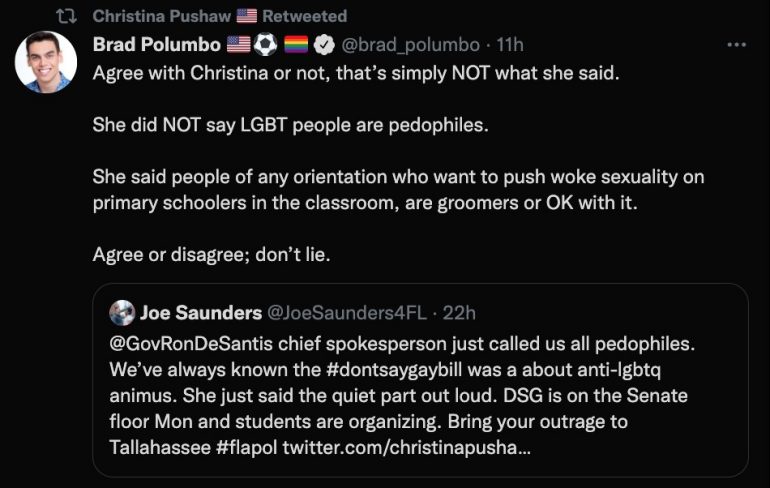