There’s one driver of immigration policy that is too often overlooked, and this story gives a perfect example of why it matters.

We need to make a correction to this story.
I made the mistake of treating the Miami Herald as a credible source.

This story is even worse than it seems. It looks like the entire leaked story was a lie driven by the immigration lawyer in an attempt to defame DeSantis.

The story that follows is still relevant, because it centers on the immigration lawyers who leaked the email, not on DeSantis himself. 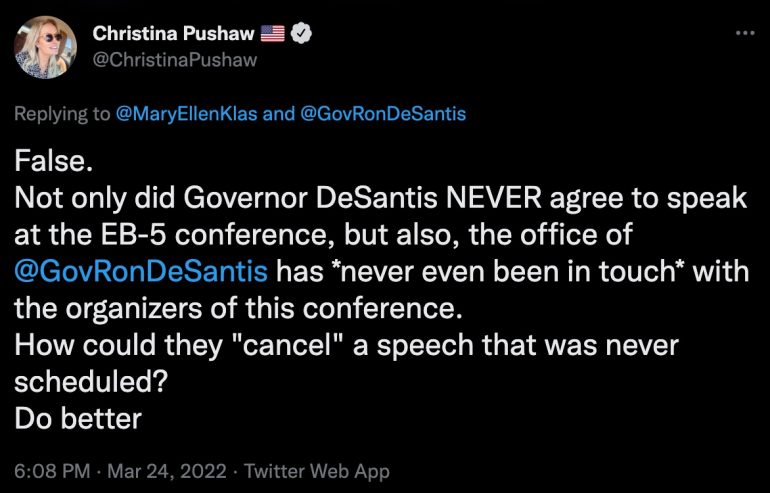 DeSantis had been invited to present a keynote speech to a roomful of professionals. That’s a pretty standard-issue activity for a Governor whatever political stripe he might wear.

What is far less common is to have the invite rescinded after the fact. Especially when it’s about a policy on which he has been totally consistent.

The invitation had been extended for DeSantis to address a conference of immigration attorneys and wealth management companies.

One prominent (and wealthy) immigration attorney, who was among the sponsors for this event objected, and organized a protest among the other speakers and sponsors which eventually resulted in Desantis being dis-invited.

“I was seriously considering your kind invitation until I was informed that you have decided to ask Ron DeSantis to be the keynote speaker at the conference,’‘ wrote Ira Kurzban, a prominent Miami immigration lawyer in an email to the conference hosts, EB-5 Investors magazine. Kurzban shared his email with the Miami Herald.

“Mr. DeSantis, also known as a mini-me for his Trump-like tactics, has engaged in the most virulent anti-immigrant conduct we have ever seen by a public official in this state,’’ he wrote.

Kurzban, the past national president of the American Immigration Lawyers Association, then detailed his objections to DeSantis: the governor’s support of lawsuits to reinstate the Trump administration immigration policy to return people caught at the border to detention centers in Mexico, his use of taxpayer money to send the Florida National Guard to the Texas border, his support of legislation blocking the transport of undocumented immigrants into the state, and his order directing state law enforcement to stop any undocumented persons who are released into Florida.

Kurzban, who is nationally recognized for his immigration work and whose “Immigration Law Sourcebook” is known as a resource in the legal community, was invited to be a panelist at the 2022 EB-5 & Global Immigration Expo, scheduled for April 7-8 in Miami. —MSN

They were pissed off because DeSantis was upholding the rule of law as currently written. Doing so, and trying to slow illegal entry into the country was somehow unethical and ‘Trumpy’.

The attendees at that conference were characterized as, ‘high net worth individuals, tax and immigration attorneys, migration agents, and project developers’.

An immigration lawyer was powerful enough to derail an invitation of ‘high net worth individuals’ from getting a shot at an interactive discussion about issues they cared about with a sitting Governor.

And he’s part of a ‘global immigration expo’.

And he’s demonstrably anti-border security of any kind.

Isn’t it time we start paying more attention to the profit motives behind immigration policy?

We’ve long since known the connection between teacher’s unions and Democrat donations, but have we considered the reality that a few million illegal immigrants create a government-funded gravy train for armies of immigration lawyers, and how THIS can be a discreet government-backed slush fund for the Democrat party?

Have we given thought to the motives of immigration lawyers who will not only make money hand over fist but will reward their Democrat benefactors for helping them do so?

Maybe we need to rethink their role in the culpability process.

It will take some creativity. Here’s one possibility to get the conversation started.

Would such an approach stand up? Maybe, maybe not. But at least now you’re thinking about this issue creatively.

How many can you come up with?

Pass them along to your elected officials, or to those who are challenging to knock a Democrat out of elected office.