We’ve got it all wrong, the Russian embassy is saying. Putin’s troops aren’t aggressors, they’re liberators.

Before you read what follows, think back to all of the reporting by CNN, MSNBC, WaPo and the Times that would rush to the defense of Antifa or BLM rioters and whip up all sorts of overheated allegations of fascism or white supremacy against the political right.

Keep all of that in mind as you read Russia’s justification for invading Ukraine.

A screenshot of the press release: 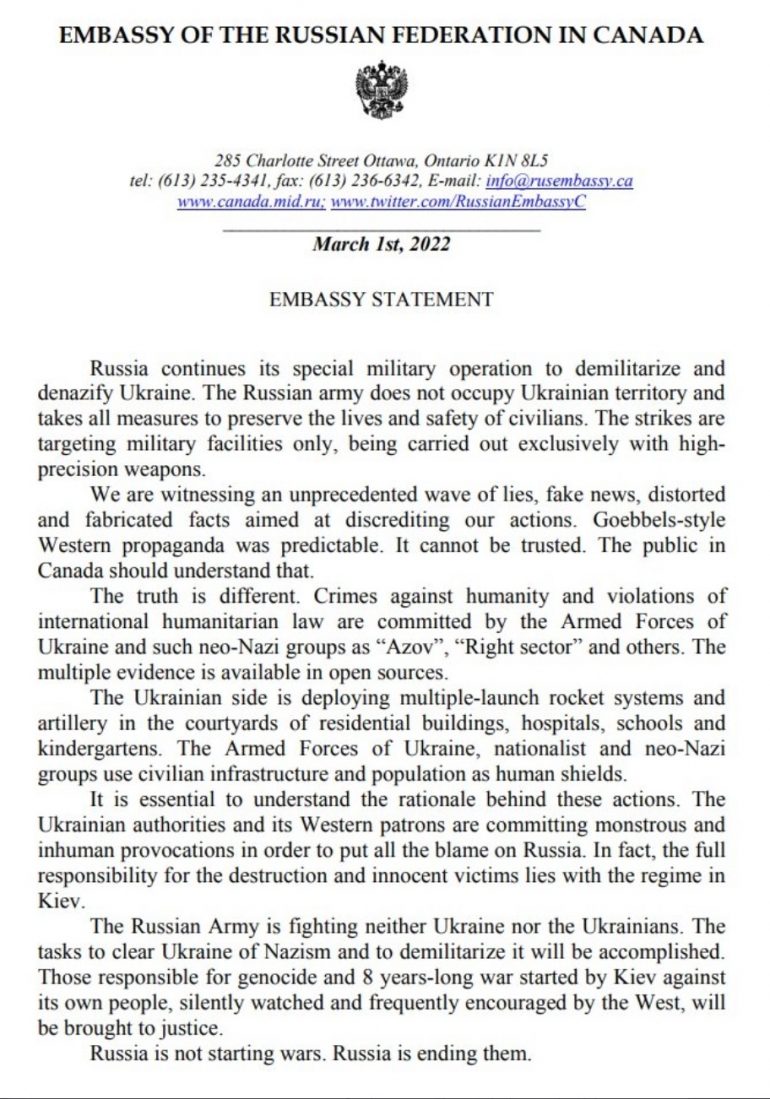 And our transcription, in case it’s hard to read on your device:

Russia continues its special military operation to demilitarize and denazify Ukraine. The Russian army does not occupy Ukrainian territory and takes all measures to preserve the lives and safety of civilians. The strikes are targeting military facilities only being carried out exclusively with high-precision weapons.

We are witnessing an unprecedented wave of lies, fake news, distorted and fabricated facts aimed at discrediting our actions. Goebbles-style Western propaganda was predictable. It cannot be trusted. The public in Canada should understand that.

The truth is different. Crimes against humanity and violations of international humanitarian law are committed by the Armed Forces of Ukraine and such neo-Nazi groups as “Azov”, “Right sector” and others. The mulitple evidence is available in open sources.

The Ukrainian side is deploying multiple-launch rocket systems and artillery in the courtyards of residential buildings, hospitals, schools and kindergartens. The Armed Forces of Ukraine, nationalist and neo-Nazi groups use civilian infrastructure and population as human shields.

It is essential to understand the rationale behind these actions. The Ukrainian authorities and its Western patrons are committing monstrous and inhuman provocations in order to put all the blame on Russia. In fact, the full responsibility for the destruction and innocent victims lies with the regime in Kiev.

The Russian Army is fighting neither Ukraine nor the Ukrainians. The tasks to clear Ukraine of Nazism and to demilitarize it will be accomplished. Those responsible for genocide and 8 years-long war started by Kiev against its own people, silently watched and frequently encouraged by the West, will be brought to justice.

Russia is not starting wars. Russia is ending them.

The only things missing from this propaganda piece were Joy Reid blaming White Supremacists, and Joe Biden blathering about Jim Crow 2.0 hurting the rights of minority voters.

Wherever could the Russians have learned to couch their arguments in such obviously propagandistic terms?