If the Russian invasion of Ukraine has taught us anything, it’s that more than one thing can be true at once.

We can show this by describing the aggressors, the defenders, and everyone else clamoring to be somehow a part of the story.

Putin’s invasion of, and indiscriminate attacks on civilian populations in Ukraine’s cities is indefensible. This should require no complex explanation.

Even Russian officials are (supposedly) confirming that Russia has deployed their ‘vacuum’ bombs in civilian contexts. We’ve seen photos and reporting of schools and hospitals flattened, or fleeing families gunned down in the street.

It doesn’t take a Ph.D. in ethics to call out such acts of aggression as evil.

Likewise, it is a straightforward and uncontroversial statement that anyone on the receiving end of military hostilities has a right to defend their homes, their families, their communities, and their country.

We have seen many amazing examples of Ukraine’s citizens doing exactly that. Their David-vs-Goliath fighting spirit has encouraged others from around the world to throw support behind the defenders… whether by providing conventional or military aid. Some have even gone so far as getting a plane ticket and joining in the defense, as one famous Canadian sniper has done.

He goes by the nickname he was given in Afghanistan, ‘Wali’. And the social media account recording his efforts there gives a glimpse of life being quite a bit different than how official sources might portray the unfolding events.

In some ways, he shows a situation that has been better than depicted on TV, and in other ways, it’s genuinely pretty bad, he invoked the phrase ‘dawn of famine’.

If Wali was looking to play the victim or that he was facing a hopeless situation he wouldn’t share stories like this one. 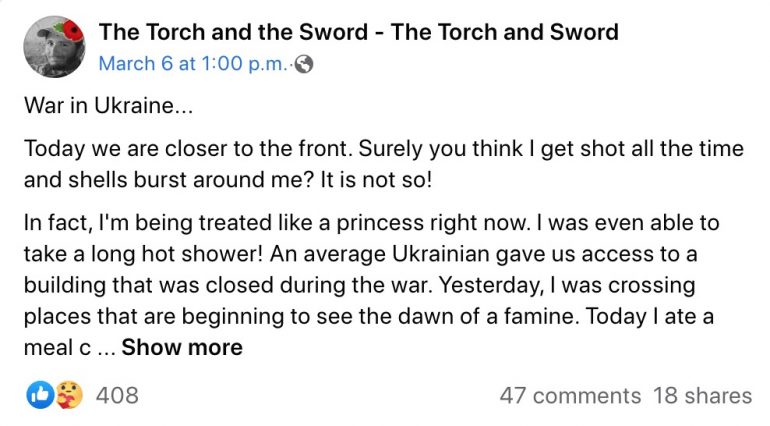 But he did note the predictable impact food delivery disruptions — plus the destruction itself of buildings including shopping centers – would have on a major city.

If he was looking to inflate the importance of his role as sniper, he wouldn’t post pictures like this one about the people against whom he had been fighting. 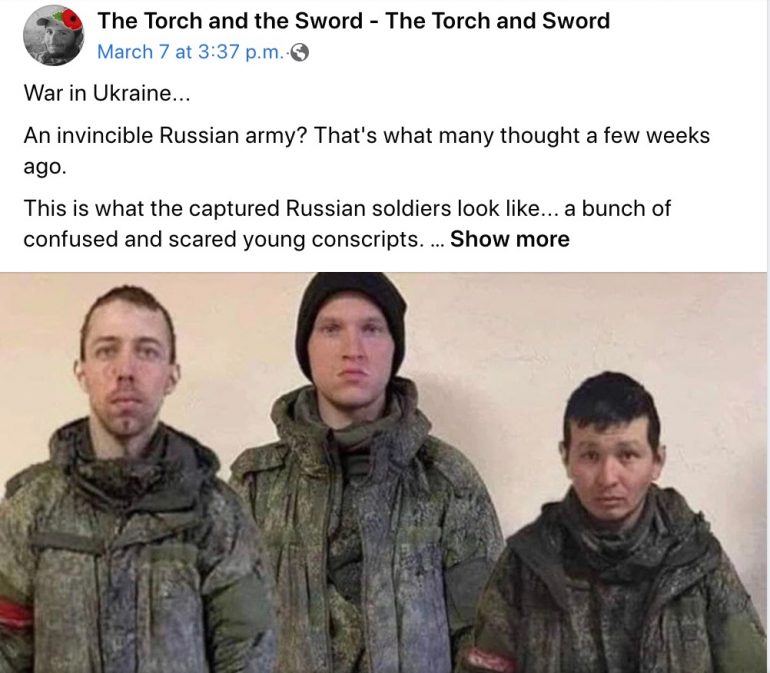 If he was mainly trying to tell an exciting story for internet drama, he probably wouldn’t bother telling us about the monotonous details like this one. 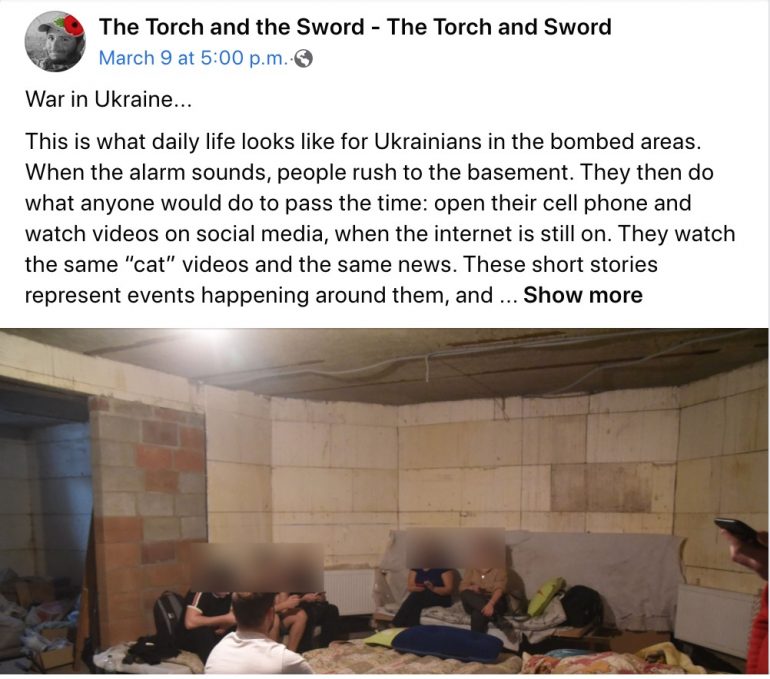 Even the creeping horrors of war, like food shortages, have an ordinary-ness in the way they are being described.

This is his post from 3 hours ago today: pic.twitter.com/9klvT8Ilhq

But the attackers and the defenders are not the only players in this drama. There are also…

Media and political players from around the world have lined up to take their pound of flesh from the global attention on this event.

We know that Russians have strategic reasons to push propaganda, and have done so.

We know that Ukrainians also have real strategic reasons to push propaganda, and have done so.

But onlookers don’t have the same wartime excuses of playing fast and loose with the truth. So, are the onlookers in media and politics reporting events as they are actually unfolding? Or are they busy crafting narratives?

Media line up for the obvious ratings bonanza that 24/7 coverage will provide. Politicians are tripping over each other to virtue-signal their position on the right side of the issue, often inflaming it in the process.

We have already acknowledged in our previous two sections that real hardship has descended on the citizens of Ukraine as Russia puts the pressure on.

But we have seen enough fake news over the years that we should be asking ourselves whether the images we are seeing at home from these ‘reputable sources’ are genuinely organic observations of events that are unfolding, or whether they have been massaged for greater narrative impact.

We need to weigh the official footage and reporting we have seen against any counter examples we might see and try to evaluate inputs from both sides, asking ourselves who has the best reason to give us an honest description of what’s been going on.

If we can’t determine who’s telling the truth, is there credible evidence from one narrative that can make you rethink claims of the others? If so, how does that new information make you rethink your assumptions?

A night club bouncer from the UK with a cynical understanding of what’s really happening over there decided he couldn’t take anyone else’s word for what’s unfolding there and wanted to see for himself.

He documented his trip (including specific evidence of his travel to Poland and then Ukraine), and took footage of the places he went. We can’t include the whole thing in this story, but his thread begins here.

Whether you agree with his belief that this is a movie-set experience, he does manage to expose some tricks the media used to put a Hollywood touch on a wartime crisis.

A well planned stage managed route ensures the Ukrainians arriving are bottled necked and compressed into the ticket hall so the media can create the illusion of ‘hell on Earth’. pic.twitter.com/qcOTyE9lez

The ‘Video Village’ of Przemysl.
Here we find the director and producer of the refugee movie.

Skipping ahead a few posts in his journey…

You larp as a photographer, il larp as a young man heading off to war. pic.twitter.com/WMSZ05aTXm

Still no visible signs of a war in the city.
Kyiv is the big cheese is this illusion, I have no interest in the hundreds of ex soviet empty and derelict villages.

The military has been using those villages for target practice and war games since the USSR fell. pic.twitter.com/lCgre1e99h

“The noose is tightening around the capital” -a reporter in Kyiv train station wearing a flak jacket whilst nobody else is.

It’s true, the station was mad busy a few days ago, but he has perfectly placed himself on the walk way, the lower levels are empty these days. pic.twitter.com/DO7shAmCqk

What is the moral of this story?

Simply this — we have been spoon-fed lies for years by powerful people, agencies and corporations with both means and motive to do so. Some have a political agenda to push, others see a pathway to power. Others still believe they will leverage some stories as a licence to print money.

Remember the ‘weapons of mass destruction’ narrative that kicked off the war in Iraq? Many of the same people who pushed that are still ‘credible experts’ in their respective fields… including journalists, politicians, and denizens of the various federal national security agencies.

Let’s be ready to admit the limits of our knowlege, keep a healthy skepticism — especially when everyone seems to be singing from the same songsheet — keep our own criticial thinking skills sharp, and draw our source information from a wide variety of information sources… evaluating it as we go.