You’d think that pulling out a gun in the middle of a sanctioned political event and shooting someone dead in broad daylight would be an open-and-shut case, right?

Not under Biden’s DOJ.

The Great Defender Of Democracy™ somehow doesn’t have enough to make any charges stick in this case.

Unconvicted trespassers on the Capitol Lawn have languished in jail for over a year, many of them still awaiting trial.

But for this guy? They’re dropping the case.

Our initial reporting on the events as they unfolded in October of 2020, can be found here: Denver Shooter That Murdered A Pro-Trump Protester NOT Security Guard — Here’s The 411

Let’s recap a few key details from that story before seeing why they dropped the case:

According to his social media, Dolloff (the shooter) was an anti-ICE activist, (so there is at least one potential motive at play here, considering how the media had been whipping up the children in cages story). He was also connected to other left-wing activist movements.

Pinkerton was asked about Dolloff’s credentials. He had none. Acting as security without a license is an offense which includes a heavy fine and the potential culpability of the company that hired him.

There’s one more notable detail before we move to the DOJ dropping this case — he wasn’t licensed to carry the gun that killed the Republican protester.

The protester who was killed happened to be a Navy Veteran. Here’s a photo of the events that they don’t think can be proven beyond a reasonable doubt. You will note the non-lethal bear mace on the ground beside his body. 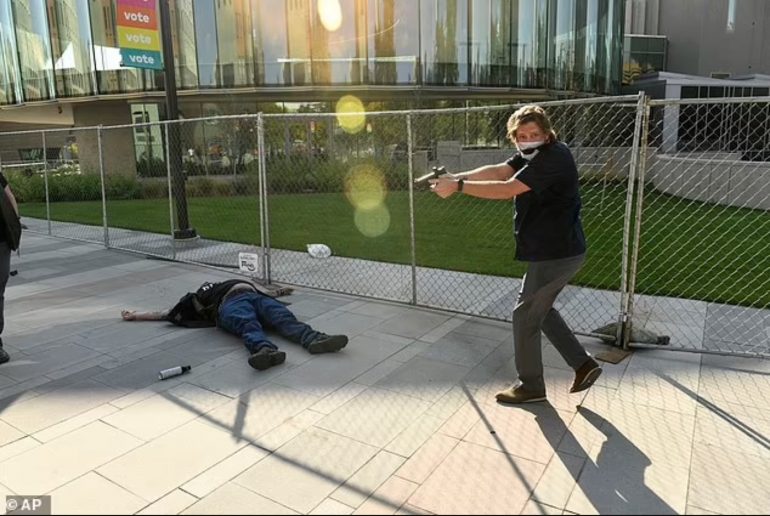 Matthew Dolloff’s attorney, Douglas Richards, said the office of Denver District Attorney Beth McCann informed him by phone Thursday that prosecutors would dismiss the charge at a pre-trial hearing March 21. Dolloff did not face any other charges in the case.

‘They just said they don’t believe they can prove the case beyond a reasonable doubt based upon the evidence,’ said Richards, who declined further comment.

Carolyn Tyler, a spokeswoman for the district attorney’s office, said prosecutors had informed the family of the 49-year-old victim, Lee Keltner, that the case would be dismissed.

‘In line with our ethical obligations, we cannot overcome the legal justifications of self-defense or defense of others,’ she said in an emailed statement.

Dolloff was hired by KUSA-TV to protect a producer covering the October 10, 2020, ‘Patriot Muster’ demonstration and ‘BLM-Antifa Soup Drive’ counterprotest.

Police say Keltner was arguing with a Black man as the rallies broke up before getting into an altercation with Dolloff.

…Keltner slapped Dolloff in the head, and Dolloff pulled a handgun and shot Keltner as Keltner fired pepper spray at him, according to an arrest affidavit. A cellphone video taken by KUSA´s producer suggests Keltner was upset that his initial dispute was being recorded. — DailyMail

Of course, the people who wanted to see Kyle Rittenhouse swinging from a yardarm for ‘murder’ will have nothing to say about this case.

What went wrong with this case?

The simplest answer is the ugliest one: ‘personnel is policy’. There are some people who decide even deaths aren’t important enough to prosecute if they cut against certain political narratives.

If true, that would of course mean we do not have equality under the law… which is a violation of that DA’s oath of office.

In case you’re wondering — yes, Beth McCann is a Democrat.