The Christian satire site remains defiant and refuses to cave to the Big Tech Overlords.

The Babylon Bee is getting attacked once again. It shouldn’t be a surprise — they’re funny, effective, and wildly popular. The left isn’t going to like that combination of traits.

First, it was the stellar examples of humanity over at Snopes “fact-checking” obviously satirical articles while trying to get the site shut down because they weren’t satirical enough. Then Facebook suppressed them because they were allegedly “fake news”. CNN tried to pick a fight with The Bee suggesting that they should have a disclaimer.

The New York Times has attacked the site several times over the years — in 2019, the “newspaper of record” called The Bee an “upstart Christian satirical site” pitting them against those well-established, influential, upstanding citizens who work as fact-checkers at Snopes. Just before the 2020 election, the Times decided to interview The Bee’s Editor in Chief, Kyle Mann, to see why they poke fun at the left. The interview is a must-read even though it’s in the New York Times. Just days later, the Times went on the attack again after Trump tweeted out an article by The Bee saying that the site “capitalizes on confusion”. Most recently, The Gray Lady implied that The Bee is a “far-right misinformation site” before backing down after threats of legal action by The Babylon Bee’s CEO, Seth Dillon. The attack just created more fodder for The Bee.

Now it’s Twitter is that is accusing The Babylon Bee of “hateful conduct”.

The Christian satire site The Babylon Bee is refusing to back down after Twitter locked its account over a tweet naming U.S. Assistant Secretary for Health Dr. Rachel Levine the satire site’s “Man of the Year” for 2022…

…In suspending the Bee’s account, Twitter cited its rules against “hateful conduct,” which state, “You may not promote violence against, threaten, or harass other people on the basis of race, ethnicity, national origin, sexual orientation, gender, gender identity, religious affiliation, age, disability, or serious disease.”
Source: Fox News

The tweet in question was sharing an article naming Biden’s Assistant Secretary for Health as The Bee’s “Man of the Year” — the problem was that this was Dr. Rachel Levine.

The Babylon Bee’s Man Of The Year Is Rachel Levine 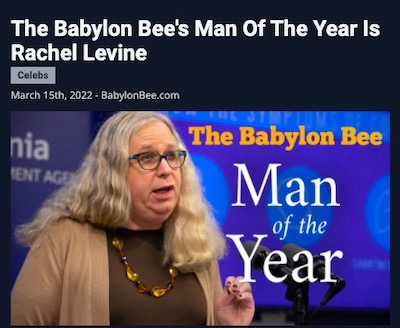 You may recall Dr. Levine for taking the unsurprising position that minors with gender dysphoria should be permitted to mutilate their bodies and make themselves sterile without parental permission.

Dr. Levine is not just a man who puts on women’s clothing and calls himself a woman, he also caused the deaths of thousands of elderly nursing home patients in Pennsylvania after forcing COVID-positive patients into the facilities. Levine clearly knew that this was dangerous since he removed his mother from a long-term care facility and put her into a hotel after the deaths started to skyrocket following the issue of an order similar to the one that Andrew Cuomo, the disgraced former Governor of New York, had signed.

The article posted by The Babylon Bee was published on the same day that USA Today included Levine as one of their “Women of the Year” — which sounded a whole lot like satire itself.

The USA Today article states, “Levine said she is concerned about the challenges women and girls face related to body image. She ran an eating disorder program at Penn State University and was struck by the pressures of social media related to appearance.”

So, the person who was born male and now wears a dress and calls himself a woman as though it’s nothing more than a costume to be worn is concerned about body image challenges faced by women and girls? That certainly sounds like satire.

Last year, Levine was sworn in as the first openly transgender four-star admiral.

Of course, that’s not how the Biden-Harris administration branded it — it was a win for women.

The Biden administration announces that Rachel Levine, a biological man, is now the “first-ever female four-star admiral” in the public health corps pic.twitter.com/1JIa5Eh0vZ

Are you going to tell me that this photo isn’t red meat for satire sites? 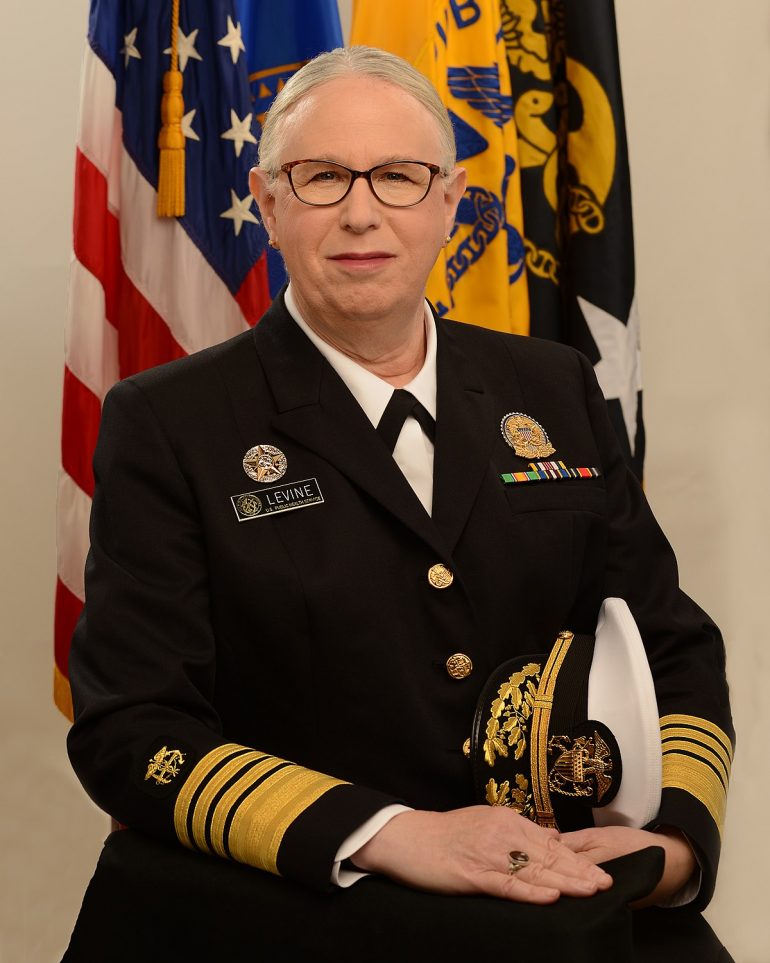 There is a concerted effort by Big Tech and the left-wing “woke” activists to suppress basic truths because it hurts some peoples’ feelings.

We are being cowed into silence about biological reality because a fraction of the population suffers from gender dysphoria.

Someone who is born with XY chromosomes is male and when that person becomes an adult, they are a man. Someone born with XX chromosomes is female and an adult female is called a woman. There is nothing that can be done surgically or with medication that will transform a man into a woman or vice versa. People are born male or female and will die male or female and it has nothing to do with how they “identify”. Biology doesn’t change because of someone’s earnest desire for it to change.

These are very basic truths that we are no longer allowed to say. But The Babylon Bee is saying it for us.

Seth Dillon, CEO of the Bee explained the situation with The Bee’s Twitter account in a short thread.

I’ve received some messages from people asking how they can help. I can think of a few ways:

1. Never censor yourself. Insist that 2 and 2 make 4 even if Twitter tries to compel you to say otherwise. Make them ban tens of millions of us.

2. Get on our email list so we have direct contact with you. It’s not a perfect solution — email service providers have censored us, too — but at least we own our email list and can take it with us.https://t.co/LJrgAvyjta

Dillon remains defiant. He says that they will be able to post again once they delete the tweet in question and The Bee is choosing not to do that. They’ve done nothing wrong and they refuse to bend the knee and imply that they have.

They could, of course, delete the tweet themselves. But they won’t. It’s not enough for them to just wipe it out. They want us to bend the knee and admit that we engaged in hateful conduct.

This whole situation is so unjust to women.

We’ve seen the question of transgender athletes in women’s sport coming to a head with UPenn’s Lia Thomas, who is handily breaking women’s swimming records.

We’ve also seen how male convicts who identify as women are transferred into women’s prisons and women are being abused. In the United Kingdom, they’re now refusing to call someone who identifies as transgender a rapist because rapists can only be male. Even pedos that call themselves trans are getting special treatment by woke DAs.

There are consequences for how we order society and sometimes those costs are borne by the most vulnerable. It would be dangerous to house men and women together in prison. There is a separate category for women in sport is because elite female athletes cannot compete at the same level as elite male athletes. That may not be a popular thing to say, but it’s true.

If we’re not going to acknowledge that Rachel Levine was a man… how can we acknowledge that Levine has an M.D.? That M.D. was awarded to Richard Levine. Does all history before Richard put on a dress and changed his name to Rachel suddenly get erased? If that’s the case, then “Rachel” Levine is unqualified for both the position within HHS and as Admiral.

But we all know that that’s not how this works. We are to pretend that Richard was always Rachel, which is absurd.

The question is what will the social media companies allow us to say about men, women, biology, and objective reality while they try to dispel “disinformation” on their platforms.

Does this violate @Twitter‘s terms of service? If so, why? If not, why not? pic.twitter.com/PbsWBPk85O

Back in May 2021, Dillon made a video for Prager U called “Killing Comedy” about how Big Tech and activists are making satire hard to write because our reality has become beyond parody.

He says that there are complaints now being made against his personal account.

I’m getting tagged by dozens of people saying they’re reporting my personal account. Notices like this are starting to stream in.

The Left isn’t interested in freedom or debate. They demand ideological conformity. Submit or they’ll silence you. pic.twitter.com/BFFkhnT2Hz

Good for The Bee and Seth Dillon for standing their ground.