The Vice President is not okay. She continues to awkwardly cackle at completely inappropriate times.

VP Harris was sent to Poland and Romania as the official representative of the United States after Russia invaded Ukraine.

Now some of the pro-Kamala journos are going all-in on cheering on the Girl Boss saying that this is the Defining Moment that will propel her to be the natural choice in a post-Biden era. 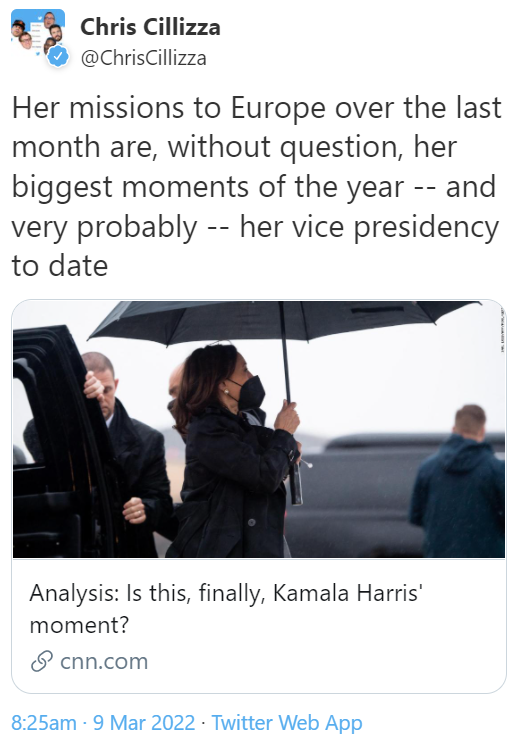 Perhaps Cillizza forgot who it was he was tweeting about. This is the woman that couldn’t hit double-digits with Democrats in the primaries. She was polling below Pete Buttigieg, for crying out loud!

Just like Joe Biden, you should never discount her ability to absolutely screw things up.

On March 10, during a joint press conference in Poland with President Andrzej Duda, Harris was asked a question about Ukrainian refugees and how the U.S. will assist in the burgeoning humanitarian crisis of women, children, and the elderly fleeing Ukraine to safe harbors in the region.

There was a brief moment of confusion because there were two questions asked — one directed at VP Harris and the other at President Duda — followed by an awkward pause as they both looked at each other deciding who should speak first.

It was at this point that Harris made a joke and laughed inappropriately. It was her weird, fake cackle that she does when she’s nervous or in over her head.

Kamala Harris tells a joke and bursts into laughter after being asked about Ukrainian refugees.

“A friend in need is a friend indeed ha ha ha” pic.twitter.com/dUZNHRnJqT

Sure, it was a weird moment, but she was just asked about Ukrainian refugees. A little decorum would be nice, woman!

And what is up with her elbows flapping in and out while she talks? Does she work like a fireplace bellows and her elbows are required to push out all that hot air when she speaks?

Just watch her when she gets on a roll. I don’t think she can’t control it.

Here she is speaking as though she’s trying to make a word count on a book report for a novel that she hasn’t read.

We’re not sending our best pic.twitter.com/n72SkT3vX6

Just so you can get just how bad that is, here is a transcript with the pauses in place.

VP HARRIS: The UN has set up… a process… by which there will be… a review and investigations and we will, of course, participate as appropriate and necessary.

We all watched [shrug] the television coverage… of just yesterday. That’s on top of everything else… we know and don’t know yet… based on what we’ve been able to see. And because we’ve seen it or not doesn’t mean it hasn’t happened…

But just limit it to what we have seen… Pregnant women going for healthcare?… Being injured by… I don’t know, missiles? A bomb? In an unprovoked, unjustified war?… Where a powerful country is trying to take over… another country? Violate its sovereignty, its integrity, for the sake of what? Nothing that is justified or provoked?

Absolutely there should be an investigation, and we should all be watching! I have no question the eyes of the world are… on… this war… and what Russia has done in terms of this aggression and these atrocities. I’ve no doubt.

I’m almost embarrassed for her, but then I remember how she handled the Kavanaugh confirmation and watching her flounder on the world stage and fall flat on her face because she’s just so incredibly inept is simply delicious.

It’s pretty clear that just like the President, she can’t do anything without staff-prepared notes. I’ll bet she couldn’t even find Poland on a map without assistance.

Here she is making that pretty clear while she struggles to disguise her incompetence with a wall of words. Spoiler Alert: It doesn’t work.

And this is why they didn’t send Joe Biden over there.

Can you imagine the Shambling Husk of Mediocrity attempting to handle pressers without a teleprompter and his staff on hand to shoo out the reporters when it was time for his pudding and nap?

He’d never be able to handle it and probably escalate the situation with his slurred, off-the-cuff incoherence or his hair-trigger temper.

Vice President Kamala Harris has been given the crap portfolios since Day 1 (for example, the Southern Border,) and she’s clearly not very pleased about it.

Kamala seems unclear about what the role of the Vice President is — it’s to take the garbage issues that the administration doesn’t really want to have pinned on the President and make it look like it’s being addressed by the most Senior Administration Official second only to the President.

Since there appears to be a Cold War within the West Wing, perhaps Kamala didn’t get the memo from one of her disgruntled staff members before they began running for the exits.

The Vice President is absolutely awful at her job — both in reality and whatever it is that she imagines it to be.

This is the woman that is one (weak) heartbeat away from the Oval Office.

Here is the video of the full presser if you’re feeling masochistic.

Here’s Fox News correspondent Trey Yingst saying that her speech was “detached from the reality on the ground.” Yikes.

“It was detached from the reality on the ground … We heard this diplomatic and political speak from Vice President Harris. The Ukrainian people don’t need that…” pic.twitter.com/oWwzRplY8E

While Trey Yingst says that the Ukrainians “don’t need thoughts and prayers” they do need them as well as some actual tangible assistance.

The good ol’ U.S. of A. could also use some thoughts and prayers because the current administration makes a mess of everything it touches.