It’s no secret that motivated activists have been pressuring that mysterious and amorphous entity generally referred to as the ‘scientific community’ to arrive at a ‘scientific consensus’ that various policy objectives of the left just ‘happen’ to be backed by science.

One of the more glaring examples of this was CDC guidance that was taken almost word-for-word from the dictates of Teacher’s Union reps. Another was the political pressure Little Lord Fauci exerted to silence and delegitimize any scientist making an assertion that deviated from his approved talking points. Their ‘scientific’ responses in rushing to discredit the Barrington Declaration authors and the study author featured in the Vanity Fair piece are proof enough of that.

But now we’ve got a sitting president pushing for the widespread availability of drugs and procedures that — if taken correctly — can disfigure a body and render it sterile.

The President is not pressing for such drugs and treatments to be available to adults with a capacity for full comprehension of the irreversible impact of such a decision. He is pressing for, effectively, the sterilization of children.

We had people doing the same thing 100 years ago. History remembers them as monsters: 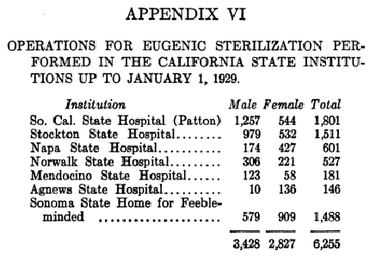 But Biden is different, his defenders would say. He is offering a compassionate option to confused children.

Is he? Or is he using his Bully Pulpit to aid in the spreading of medical misinformation that benefits a specific activist cause as well as giving undeserved credibility to a badly flawed study?

Did we call it ‘badly flawed’? We really should use a stronger word in this instance. How about ‘tainted’. Or even ‘corrupted’? Here’s why:

In statements commemorating “Transgender Day of Visibility,” the White House and Department of Health and Human Services cited research from the Trevor Project to support the use of puberty blockers, hormone therapy, and sex-reassignment procedures in children seeking to change genders. Two of the Trevor Project’s donors, AbbVie and Allergan, make drugs and medical products used in the medical gender transition process. The charitable foundations of both companies gave at least $50,000 to the Trevor Project, according to a review of tax documents and the Trevor Project’s website. The Trevor Project did not disclose the funding in its research.

…The Trevor Project study, published in the Journal of Adolescent Health and cited by numerous news outlets, claimed that teenagers with access to drugs and procedures to change genders were less likely to have depression and suicidal thoughts. The organization polled nearly 12,000 transgender and nonbinary youth, offering gift cards to some participants. In citing the study, HHS said “early” use of the drugs was “crucial” to the well-being of transgender children.

Ok, maybe there were conflicts — but the suicide prevention aspect is important enough that we should look past that, right?

Though the medical gender transition industry is growing rapidly, some researchers say puberty blockers and hormone treatments for children have not been studied enough to ensure their safety.

A group of scientists, including a physician who has taken part in clinical research for AbbVie, wrote in a 2019 letter published in the Journal of Clinical Endocrinology and Metabolism that the therapies could cause sterility, sexual dysfunction, and cardiovascular problems. The researchers also said that limited data from people who have undergone gender transitions “fail to demonstrate long-term success in suicide prevention.” —FreeBeacon

There’s a lot of money to be made by Big Pharma in this industry. Because you’re suppressing the natural use of the body, this is the holy grail of drug alternatives — it’s a lifelong ‘subscription plan’.

As for the drugs not having been studied enough to make a determination on their safety to children… that didn’t stop anybody from sticking our kids — who statistically had the LOWEST risk of hospitalization — with the Covid jab, now did it?

Maybe that’s why politicians in Florida are looking at legislation that will keep minors beyond the reach of any treatment, drug, or procedure that could disfigure or sterilize them.