While the White House tries to spin this as “Putin’s Price Hike” we all know that higher costs are because of Bidenflation.

Remember when the administration told us that inflation wasn’t happening, then it was “transitory” and only affecting rich people until it was actually a “good” thing?

Well, good luck spinning that as Tuesday’s inflation numbers show that Americans are paying more for pretty much everything. Inflation has soared to 8.5% in one year — a benchmark that hasn’t been hit since December 1981. 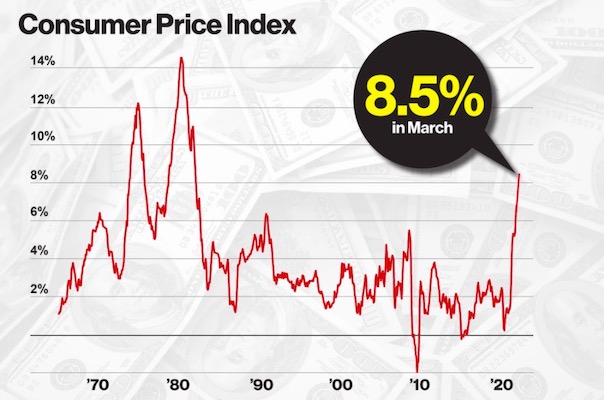 This has been going on since Biden took office thanks in large part to the continued money printing that began in the wake of government-imposed COVID lockdowns. But printing more money seems to be the go-to position of the Federal Reserve during the Biden-Harris administration, and to hell with the consequences.

Well, everyday Americans are now reaping what the administration is sowing.

Costly inflation climbed even higher to a new four-decade high of 8.5% in March as the Russia-Ukraine war contributed to a record surge in gas prices and exacerbated existing supply chain disruptions — forcing Americans to pay even more for basic goods.

The latest uptick in March marked the highest annual rate of increase of inflation since December 1981, according to data from the Bureau of Labor Statistics released Tuesday.

On a monthly basis, the Consumer Price Index — a closely tracked inflation gauge that details the costs of goods and services — rose 1.2% from February to March.

#BREAKING: March’s inflation report comes in at 8.5%, which is still at a 40-year high and an increase of 1.2% since last month’s report, which is the highest single increase since 2005.

On Monday, White House Press Secretary Jen Psaki was trying to downplay what the administration knew were going to be ugly inflation numbers.

The White House insisted that the inflation is high because of Putin’s invasion of Ukraine.

“We expect a large difference between core and headline inflation,” she continued, “reflecting the global disruptions in energy and food markets.”…

The White House says it anticipates a wider-than-normal disparity between the headline and core readings because of an abnormal increase in gas prices that occurred last month. The price for a gallon of regular unleaded gasoline hit a record high of $4.33 on March 11, according to the American Automobile Association.
Source: CNBC

While Putin’s invasion of Ukraine had an effect on fuel costs, let’s not forget that Biden had a hand in that, too.

Excluding fuel and food excuses Biden’s policies from responsibility. On Day 1, he turned back the clock on Trump’s energy policies that had made the U.S. energy independent. America is once again reliant on fossil fuel imports where the price is set by OPEC which includes a few member nations that aren’t exactly fans of America.

Inflation is a tax on everyone and it hits people with lower incomes harder — especially with things like food and fuel costs.

Even a WaPo reporter can understand this.

The Fed might like to look at inflation without energy & food, but Americans sure don’t look at it that way.

It is not “Putin’s price hike.” pic.twitter.com/FGnxvIueMP

Psaki blames “Putin’s price hike,” but everyone know who is responsible for the rapid devaluation of the U.S. dollar.

We all know that the B.S. they’re peddling is simply not true. The Left’s obsession with printing money is a big chunk of the problem here.

As for Psaki, well, the woman just got a gig with MSNBC and she appears to have a medical condition that frequently afflicts those on the left side of the aisle… she’s allergic to honesty.

I focus on data.

So it is important the right info goes out.

Psaki previously said in March that month-to-month inflation was down.

Today, CPI is coming out.

How high do you think it’ll be? pic.twitter.com/1I6bnKczVl

A president who doesn’t know what he’s doing…

But no mean tweets https://t.co/c8TXvZrFIF

I bet a whole lot of Americans would probably take the mean tweets and $2/gal. gas right now…