You can add one more spate of violence to the surge we’ve seen in New York City. A gunman opened fire on the subway.

Whatever the motive might be, this spree was clearly premeditated. The attacker brought a gas mask, threw some sort of a smoke bomb on a subway, causing it to stop, and started shooting.

NBC New York described the suspect as “a man about 5 feet 5 inches tall and 180 pounds who was wearing a gas mask and an orange construction vest,” according to law enforcement sources. The station reported that they say five people were shot.

A witness told The New York Post that the suspect was a “5-foot-5 black man, around 170 pounds wearing an orange vest and gas mask,” and said she saw him drop “some kind of cylinder that sparked at the top.” — Heavy

NYFD was first on the scene at 8:47 responding to a smoke call. It was not long before they realized what the reality of the situation was.

Here are some more details of what happened.

Police sources tell CBS2 a train pulled into the 24th Street station. As its doors opened, someone threw a smoke bomb onto the train and started shooting.

The train continued to the 34th Street station, where some of victims got off and called for help.

Sources say five people were shot, one of them critically wounded. Others were treated for smoke inhalation and injuries from the panic that ensued.

Investigators believe this was a coordinated attack, but the motive remains unclear. — CBS

The suspect has not yet been apprehended.

Police are asking for tips, especially any video that might have been captured, to help them in their investigation. 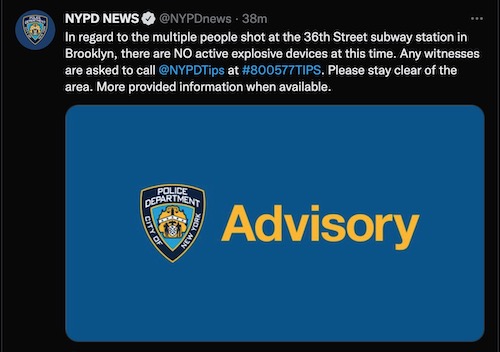 The video below shows the aftermath.

Fair warning, the crime scene video is not censored.

We wish those in harm’s way a speedy and full recovery.