The reporter that normally covers teen Tik Tok influencers has publicly named the anonymous person behind a powerhouse Twitter account.

Taylor Lorenz is a crybully journalist that exposes the social media screw-ups of private citizens and makes sure that they pay for their “crimes” — even if she’s making them up.

You might remember her name because she’s been mentioned by Tucker Carlson a few times.

His first mention of Lorenz was in March 2021:

Tucker responded to that, too.

Lorenz is a trust fund kid who went to an expensive Swiss boarding school, and then got a job at The Atlantic, moved on to the New York Times, and is now at the Washington Post.

This woman who won’t even confirm the year that she was born is now going after the woman behind the incredibly popular anonymous “Libs of Tik Tok” account.

The woman who runs the account has stated repeatedly that she remains anonymous because she gets threats from leftists who don’t like that she reposts videos from Tik Tok to Twitter exposing what the left is saying in their own words.

Lorenz thinks that this anonymous person should be outed for doing the job that Lorenz is supposed to be doing but failing at.

On Monday, Christina Pushaw, press secretary for Gov. Ron DeSantis posted a screenshot of an email sent by Lorenz for a piece “exposing” the woman behind “Libs of Tik Tok.”

The Bezos Post’s internet hall monitor is so excited to “expose” @libsoftiktok. Here is my comment: ? pic.twitter.com/SodXls9NV7

There was a lot of buzz about on conservative Twitter.

Taylor Lorenz and the Washington Post are intending to incite violence against a woman for the crime of operating an anonymous twitter account, WaPo and Lorenz know that Libs of TikToks faces death threats from ANTIFA.

This can only be described as terrorism. pic.twitter.com/IHL3RAQflm

it gets so much worse.

i have confirmation from @libsoftiktok that @taylorlorenz knocked on her relative’s door today in addition to calling her family members.

this woman doxxes and harasses people constantly, but god forbid you send her a mean tweet. https://t.co/mMWgU3d5dK pic.twitter.com/wtD9zbzEVf

This is restraining order level crazy

Hi @TaylorLorenz! Which of my relatives did you enjoy harassing the most at their homes yesterday? pic.twitter.com/QehkBSgcmG

Interesting how this is somehow more newsworthy than reporting on Hunter Biden’s laptop and “10% for the Big Guy” in the weeks before the 2020 Election, eh?

It’s pretty clear why, though — Lorenz and the Regime Media hate the politics of “Libs of Tik Tok” and they hate that their insane worldview is being exposed.

The Washington Post’s exposé on the owner of the account cites Media Matters repeatedly in the article. Any report that includes Media Matters shouldn’t be taken seriously since the Clinton acolyte author of the 2017 “War Plan” clearly laid out their intention to destroy the political right by targeting “right wing media.”

Her primary source is Media Matters

Pretty clear this is a partisan hit job pic.twitter.com/vkgKCGZtlR

Lorenz’s criticism seems to be centered around what she’s calling Libs of Tik Tok’s “anti-LGBTQ+” posts about (what we call) groomer teachers and the trans insanity.

ClashDaily has chosen not to reveal the identity of the woman behind the Libs of Tik Tok account. Interestingly, Lorenz goes out of her way to announce that the anonymous user said she’s “proudly Orthodox Jewish.”

It also included a link to addresses.

The same journos praising Taylor Lorenz doxxing an anon account accused Tucker of incitement and harassment against Lorenz because he said her name and used her NYT photo.

Meanwhile Lorenz’s piece links to a page that has the person’s home address. The journos are full of shit.

And extremely dangerous with the rise of antisemitism on the left.

The left is triggered by seeing their own opinions being publicized pic.twitter.com/gcihDmPNRn

“May have been at J6” like thousands of other Americans who were peacefully exercising their 1A right to free speech. Most of the rally attendees didn’t go anywhere near the capitol or commit any crimes. Your Bolshevik struggle session won’t work here. https://t.co/P8OafJfiEQ

Glenn Greenwald has a lot of thoughts on Lorenz going after the anonymous account.

Taylor Lorenz is about to “expose” the private citizen behind some anonymous account on Twitter, and when people criticize her for it, she and her friends will claim Taylor is the Real Victim™ and anyone criticizing this type of “journalism” will be guilty of causing her trauma. https://t.co/RnAsVLRbDu

Only the narcissists in corporate media could take someone who grew up in Greenwich wealth and Swiss boarding schools, who regularly harms the lives of ordinary citizens with their massive journalistic platform, and tell the public: *she’s* the victim and can’t be criticized. pic.twitter.com/nFT2FwNFM3

This is the framework corporate journalists are trying to construct and force you to accept.

They can criticize, expose, bully, and destroy anyone they want: no limits. They’re <whispered reverence> journalists.

You can’t criticize how they use their power. That’s “harassment.”

Journalism isn’t about just exposing things for the sake of it.

I feel confident that if a Fox crew did to Taylor what Taylor did to this citizen – show up at the homes of her relatives to dig for dirt – a national media and mental health crisis would be declared.

That’s because, again, this has nothing to do with journalism: just politics.

Lorenz is doubling-down and claiming that exposing the name of a private individual who just reposts videos of the Libs owning themselves is just “basic journalism” knowing that it will trigger online and in-person harassment. 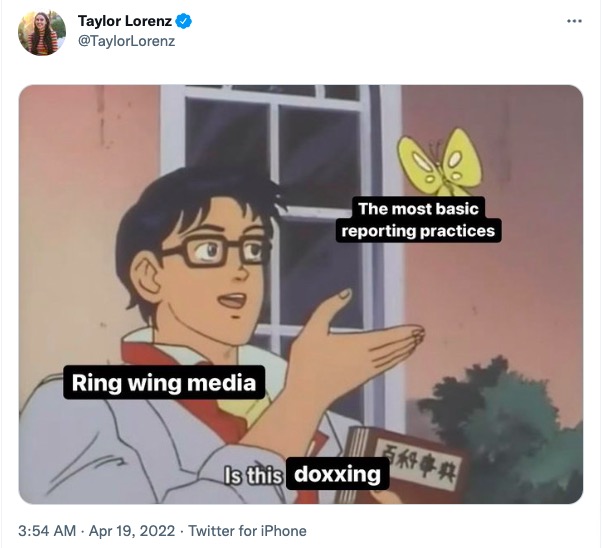 Let’s be clear here, Lorenz is just awful. There’s just too much to get into in one article, but here’s one thing that you should know — her reporting at the NYTimes triggered a $6.2 million defamation lawsuit.

Glenn Greenwald has been an outspoken critic of Lorenz for some time.

If you’re going to insinuate yourself into polarizing political debates and report (or pretend to “report”) on the powerful, you’ll be “attacked” online. It can be extra toxic due to race, gender, sexual orientation, etc but it’s still just online insults. That’s not persecution.

What is just incredible is that a couple of weeks ago, Lorenz appeared on MSNBC and talked about how she suffered from “severe PTSD” and contemplated suicide after she was the target of online harassment.

The entire MSNBC segment is here:

Tucker Carlson had some fun with that…

“Ask yourself if it’s fair because she identifies as a woman for her to claim victim status, and the answer is no it’s not fair but it’s exactly what they always do.” pic.twitter.com/qIBHmAEn8n

Lorenz crying about how “people on the internet” will try to “destroy your life” is pretty rich since that’s pretty much what she does.

Lorenz decided to blast MSNBC for the segment when she came off looking like a complete ass.

I could teach an entire class on this stuff, but the simple fact is that very few people in power in newsrooms actually understand how the modern internet and online landscape works, and so they continually give ammo to bad actors. https://t.co/6UER5ptRTJ

Lorenz, still throwing shade at MSNBC after they tried helping her: “That’s why I’ve been so outspoken about calling out big legacy media companies. Because it’s time for them to learn how the Internet works.” pic.twitter.com/2dJ8DYy9M0

This chick is a blatant hypocrite. 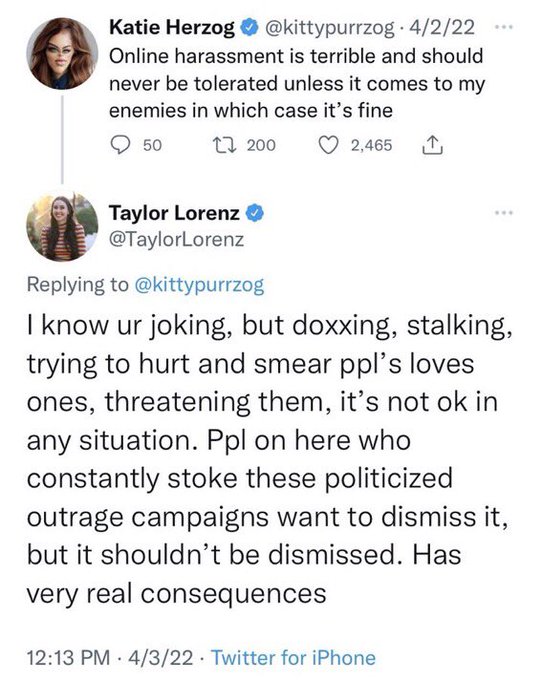 This meme shows just how awful Taylor Lorenz is: