With the urban homicide bodycounts spiking across America, those ‘say their names’ people have grown strangely silent. Last week, one mayor was bold enough to call them out on it. How bad are the numbers?

There’s an awful lot the Mayor of New York says and does our readers would disagree with, but some issues transcend the usual political lines we draw for ourselves.

One of those issues is the value of human life. And with rates of lethal violence spiking to some of the highest rates we’ve seen in decades, we’re finally seeing a big-city Democrat mayor who is facing the issue head-on.

What he said is so simple that it should be obvious to everyone, but so outside the lines of acceptable political conversation, it took some courage for a Democrat to actually say the unspoken truth out loud.

Mayor Adams makes a couple of really importat points in this short clip.

‘Here’s my question I put out to the city: I thought black lives matter? Where are all those people who stated Black Lives Matter? Then go do an analysis of who was killed or shot last night. I was up all night speaking to my commanders in the Bronx and Brooklyn. The victims were black. Many of the shooters were black. So I ask the question that was asked of me when I was a child, It’s ten am — 10pm — do you know where your children are? Why are 16, 17, and 18 year olds out in our streets, armed with guns, 12, 1 o’clock at night? When are we going to start asking these serious questions? If black lives matter than the thousands of people I saw on the street when George Floyd was murdered should be on the street right now stating that the lives of these black children that are dying every night matter.’

While BLM leaders were sipping champagne in million-dollar homes, bodies were piling up on city streets. When Republicans have raised this over the years, we were branded bigots.

Think about that for a moment:
Pointing out that black people are disproportionately the victims of violent crime, and saying this is a problem that needs to be tackled is racist? But Democrats sweeping the problem under the rug as though they are acceptable losses in an urban setting is NOT racist?

The mayor said we should look into the numbers. The numbers don’t lie.

(…)FBI data show murders across the board spiked by nearly 30% in 2020 compared to the year prior, marking the largest single-year increase in killings since the agency began tracking the crimes.

At least 7,484 Black Americans were murdered in 2019, according to FBI data Fox News Digital reported on Tuesday. That number shot up to at least 9,941 murders in 2020, meaning there was an increase of 2,457 Black Americans murdered over the previous year.

There’s more context needed. According to Statistica, here is the demographic breakdown in America in the same year.

That demographic breakdown gives us a ratio of 250 million white Americans to 44 million black Americans. That means the raw data of total murders only tells part of the story.

What percentage of each population was a murder victim in the same year?

Two-hundred-fifty million divided by 7043 gives us approximately one murdered white American for every 35,496 people.

Meanwhile, dividing the larger body count (9941) into the much smaller number of 44.78 million black Americans gives us approximately one murder victim for every 4,505 people.

If we really want to see some of these lives saved, Democrats and the media will have to stop talking about some kind of a generic ‘gun problem’ — as though people in rural Montana were being routine slaughtered by legal gun owners — and start looking at what has actually been killing people: an urban crime problem. 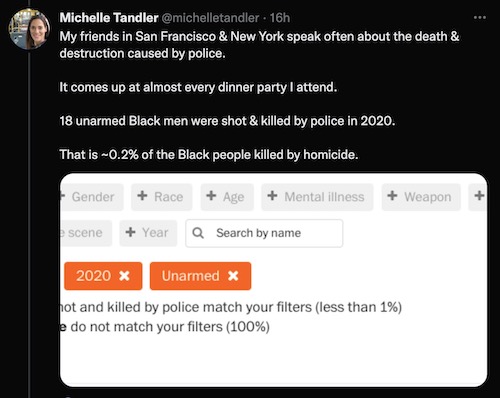 Tandler is a liberal, but one who gets this issue right. See her make the rest of her case in the thread here.

We need to get this issue right. Lives are literally depending on it.