Instead of Carnegie’s book about winning friends and influencing people, Kamala could write one about losing them and alienating people.

Despite somehow failing up all the way to the White House, she’s clearly an authority on alienating people. It’s not just her staffers, either.

This time, it’s in one of those photo-ops the political process relies so heavily upon to ingratiate themselves to the public.

While it is true that Democrats have historically relied on some significant support from Jewish American voters, a recent rise in support for the Palestinian side of that conflict has changed the math considerably for Democrats.

With a crowd that’s perpetually offended to begin with, situations like the one that popped up over the weekend only make things worse. 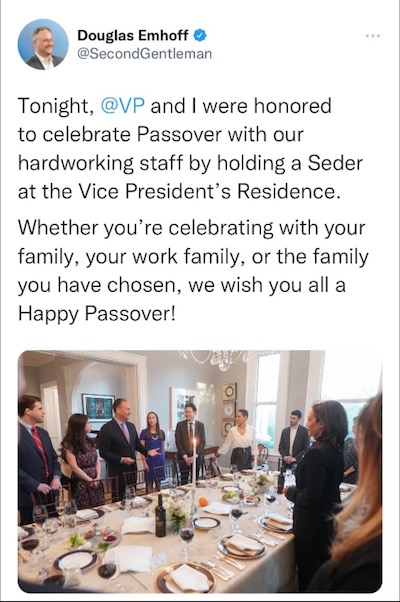 Kamala used the Veep residence to host a seder meal. What could possibly go wrong? A little food, a little wine…

Aaaaaand…. it was the wine. 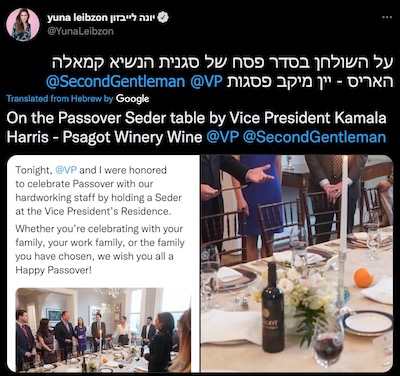 What’s the big deal? Wine is wine, right? Not in this case.

The ‘make-everything-a-political-statement-about-oppression crowd showed up. 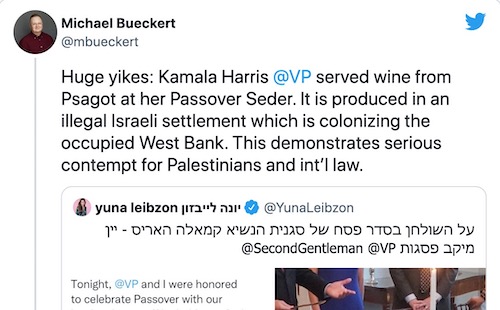 Why is this particular bottle so obnoxious to the ‘free Palestine’ crowd? Because the bottle features a historical reminder of Israel’s presence in that location during the Great Revolt.

The Psagot Winery was founded in 2003 by Yaakov and Na’ama Berg. On their website, they tell the story of how, during the construction of their winery, they found a cave with a coin dating to the Great Revolt of 66-73 CE that had the words “For Freedom of Zion” printed on it.

That coin became the emblem for their wines and is on all their bottles, including the ones that were on Harris’s Seder table.

…That included a photograph of the coin, which Berg said, has symbolized “the return of the Jewish people to their homeland.” — JPost

Israel’s historical homeland, fighting for ‘Freedom of Zion’ roughly 2000 years ago is the one message Democrats would definitely NOT want to bring up in reference to Israel and Jerusalem.

Not in the current political climate, anyway.

The lesson here, for anyone willing to learn from it, is you are never ‘pure’ enough for the woke crowd not to take issue with you. You are never more than one small misstep from bearing the wrath of the activist left.

This infraction may be ‘mild, but it will be remembered.

This crowd never forgets a grudge.